Home US lacks consensus to impose its policies

US lacks consensus to impose its policies

Manolo de los Santos, coordinator of the People’s Summit to be held June 8-10 in Los Angeles, assures that this meeting will raise the demands of Latin America and the Caribbean in the face of a call “of the Americas” that is already a failure. 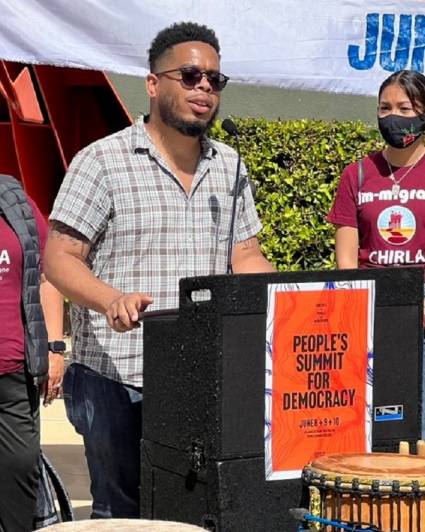 Despite the fact that they have been denied permission to march on June 10 through the streets of the city of Los Angeles, the People’s Summit 2022, which, as every year since 2005, is held parallel to the misnamed Summit of the Americas, will demonstrate on that day.

The confirmation was given by Manolo de los Santos, coordinator of the event, when asked by Juventud Rebelde. But the question was just the newspaper’s excuse to extend in a dialogue via whatsApp, to ask the also co-director of the People’s Forum organization and a  member of the International Assembly of the Peoples, his vision about that refusal. The importance of an appointment that is held, he said, “at a key moment”, as well as the reasons on which the decision to hold the march is based despite everything, among other issues related to the exclusionary Summit of the Americas that, in his criteria and that of many, is already a failure.

“We decided -and we have already told the Police Department and we have asked them to communicate it to the federal government- that we, with or without permission, are going to march in the city of Los Angeles; not only because it is our democratic right, but also because it has been many years of struggle, and what we come to express are not only complaints but demands, demands that our peoples of the entire continent have against this exclusionary Summit,” he said in reference to the presidential meeting.

De los Santos spelled out the details of the refusal that comes after a semester of preparation for the Peoples’ Summit and “exactly three months” after the organizers requested permission to mobilize in the city.

“We asked the Los Angeles Police Department for it and we were confident that the democratic and legal process here in the United States was going to guarantee our right to free expression.

“We had been waiting for months for a response, until last week, finally, they informed us that the federal government and the Secret Service had not yet authorized that march and that, therefore, they could not give us the permit.”

“We have denounced it,” said the social activist, who considered that “this Summit of the Americas, which already has a character that excludes progressive countries like Cuba, Venezuela, Nicaragua, is also excluding the peoples, and the same people who reside in this city, who are living a very strong economic and social crisis.

Asked about the central motivations of this meeting of the peoples, De los Santos said that much has changed in our continent since the initial Peoples’ Summit of 2005, in Mar del Plata.

“On the one hand, we lived through a period of great growth of popular forces, of leftist forces; many popular governments came to power. But we have also seen a great period of counterrevolution, we have seen a period of coups, military interventions, of trials against progressive presidents.

“On the contrary, it has deepened it, and it has done so despite the fact that President Joe Biden, in his campaign, had spoken of turning a new page in the history of relations between the region and the United States.”

Rejection of exclusion
The young social activist of Dominican origin also denounced the Biden administration’s attempt to divide Latin Americans; “to decide which Latin Americans are the “good” and which are the “bad” ones, “based on which political, social and economic systems we have decided to carry out.”

“That is why this Summit comes at a key moment. It is a real battle of ideas that is taking place in Los Angeles. And I think there is already a recognition, even within American society itself, that Biden and his Summit have been a failure, before they even started. Because the consensus that they assumed they had in Latin America in their favor does not exist,” he said.

The social activist also valued as very important “the massive rejection, not only of other presidents and heads of state, I believe that of the society and the peoples of Latin America and the Caribbean”, to the exclusion of Cuba, Venezuela and Nicaragua from the Summit of the Americas.

“I believe that this has also been dismantling the idea that the United States had consensus in the region and that it could continue to impose its decisions.”

“We have even seen the fragmentation of certain U.S. alliances in the region. Therefore, I believe that this Summit of the Americas will mark a before and after in the relations between the United States and Latin America.

“They will have to realize now that they can no longer maintain the same relationships. That our peoples have the impetus to be free, to be sovereign, to be independent above all else, and that our own integration fronts will have to emerge and be strengthened. And that we, the people in the United States, who identify very much with these causes, want to be part of this integration process”.

Manolo de los Santos affirmed that, for this reason, “the People’s Summit will be a reflection of all the struggles that are taking place in our continent; of the voices of Cuba, Venezuela, Nicaragua, which they have wanted so much to exclude, but which will be present, anyway, in Los Angeles.

“Our banners of struggle, the battle for sovereignty, for independence; the struggle for agrarian reform, for quality education for all; the struggle for a health system, to eliminate the “apartheid” of vaccines (anti-COVID-19), all of that will be present at the People’s Summit, and not only by the panelists from all over the continent who will be sharing with us but also in the struggles and political mobilization that will take place.”

Regarding Washington’s refusal to grant visas to the members of the Cuban delegation that would attend the Peoples’ Summit, De los Santos confessed that “to be honest, we were very upset with the denial of visas, precisely when we know that the U.S. government is inviting reactionary figures.

“They denied the possibility of a dialogue with the American people; they were afraid of the presence of the delegation of dignified Cubans who, beyond politics, beyond ideology, were going to talk about concrete and material achievements of their peoples, they were going to talk about everything possible that the Cuban Revolution is doing in these times, not only to improve the quality of life of its own people, but to help the rest of humanity.

“We were left without that live presence, but, in any case, Cuba will be present at the Peoples’ Summit; it will be participating through digital means, and I believe that no matter how much they want to block relations between peoples, we insist that Cuba is not our enemy, Cuba is a friend of humanity, and we have the right to accompany it and walk together with it in this great struggle for humanity.”

20 days ago Juventud RebeldeManolo de los Santos, People's Summit, Summit of the Americas0
Los Angeles and the prelude to a SummitSummit of exclusion vs. Summit of the Peoples