The U.S.-Backed Agreement (Scam) of the Century Exposed

U.S. President Donald Trump announced from the White House on January 28 his peace plan to “resolve” the historic conflict between Israel and Palestine, a scam that seeks to get the Palestinian people to accept an agreement that curtails their sovereignty

It could definitely qualify as the Scam of the Century. U.S. President Donald Trump announced from the White House on January 28 his peace plan to “resolve” the historic conflict between Israel and Palestine, a document titled “Peace for Prosperity. A Vision for Improving the Lives of the Palestinian and Israeli Peoples,” internationally referred to as the Agreement of the Century.

“This vision of peace is fundamentally different from past proposals. In the past, even the best-intentioned plans were simple in their objectives and had complicated conceptual frameworks. In contrast, our plan is 80 pages long and is the most detailed proposal ever presented,” Trump presented his grand strategy.

But, in addition to the numerous international resolutions and historical keys that he threw away, in his proposal for an Agreement the magnate President overlooked an unavoidable detail: any project for peace and the solution of this conflict must necessarily involve two actors: Palestine and Israel. The Palestinian side was not included in the elaboration of the plan and only the Israeli premier, Benjamin Netanyahu, attended its presentation in Washington. Taking into account only this essential element, the pact was born by itself wounded to death.

“There were no brief or detailed talks with the US administration on the so-called Century Agreement. Palestine is opposed to everything related to the agreement,” Nabil Abu Rudeina, spokesman for the Arab nation’s presidency, had previously stated.

In the face of such actions by the United States, it is impossible not to recall the signing of the Treaty of Paris on December 10, 1898, between the governments of the United States and Spain. On that occasion, Washington and Madrid defined the situation of several territories, without the participation of representatives from Cuba, the Philippines, Guam or Puerto Rico. They avoided the sacrifice of the Cuban people during several years of wars of independence. Decades later, imperialism recycles a similar script and leaves the Palestinian people, the main victims of the conflict with Israel, out of the picture.

According to the BBC, the design of the plan took about three years and had among its “architects” Trump’s son-in-law, Jared Kushner. The truth is that the moment of presentation of the controversial pact was very appropriate, both for Trump -wrapped in a scenario of impeachment and electoral campaign- and for Netanyahu -accused of corruption-. Perhaps, both dreamed of scoring points in foreign policy and at the national level, but the applause did not reach the expected dimensions.

Who wins and who loses with the American project?

If only Tel Aviv sat at the negotiating table, we can imagine the answer. The question becomes much more complex as we examine the different points of the agreement.

Accordingly, the U.S. embassy to the State of Israel will remain in Jerusalem and, following the signing of the Israeli-Palestinian Peace Agreement, the U.S. embassy to the State of Palestine will be in Al Quds (the Arabic name for Jerusalem), which would be located in the East Jerusalem section, territory that includes Abu Dis. In addition, other nations are encouraged to relocate their embassies to those locations.

“This is the most controversial and unavoidable point for the Palestinians (…). I will not engrave (my name) in my history and that of my country as the one who sold Jerusalem, because Jerusalem does not belong to me, but to everyone,” said the leader of the Palestinian National Authority (PA), Mahmoud Abbas, at an extraordinary session of the Arab League on February 1 to study the peace plan.

This contravenes international law and numerous UN resolutions on the subject, including UN Security Council Resolution 478 of 1980, which censured in the strongest terms and declared null and void the 1980 Jerusalem Law – by which Israel annexed Jerusalem as its ‘eternal and indivisible’ capital after the Six Day War – and urged UN Member States to move their embassies to Tel Aviv in protest.

However, it follows the maneuvers of Donald Trump who, since December 2017, had announced the controversial decision to recognize Jerusalem as the capital of Israel and to begin the process of transferring the U.S. embassy to that city.

So far, the governments of Guatemala and Honduras were the only Latin American countries that supported Washington’s decision and moved their embassies and trade offices to the Holy City, respectively.

Other controversial points of the Deal of the Century turn out to be that it allows Israel to annex part of the West Bank, while the Palestinians are promised several territories in the Negev desert. In addition, the Arab state will have access to the Israeli ports of Ashdod and Haifa.

The West Bank and Gaza would be linked by a tunnel through Israel. The existing Israeli settlements in the West Bank (considered illegal under international law) would be incorporated into the State of Israel. Israel would undertake not to build new settlements, expand existing ones or approve plans for construction in the areas that would become part of the Palestinian State. In exchange, two areas of comparable size to the Gaza Strip would be created south of this enclave: one would be an advanced industrial zone and the other an agricultural and residential area.

Palestine will have the opportunity to have an independent state within four years, provided that they disarm groups such as Hamas and Islamic Jihad.

“A realistic solution would give the Palestinians all the power to govern themselves, but not the powers to threaten Israel. This necessarily implies limitations on certain sovereign powers in Palestinian areas,” the plan outlines. Thus, Israel will control the airspace over the Arab state and the territorial waters of Palestine off the Gaza Strip. Two crossings on the border with Jordan, which will be included in the Palestinian road network, will also be under Israeli control, says RT.

Cuba’s position on the Accord (Scam) of the Century was expressed on Twitter by our foreign minister Bruno Rodriguez: “A biased and misleading repudiation of the US peace plan that enshrines the Israeli occupation and violates the inalienable right of the Palestinians to have their own state on the pre-1967 borders, with East Jerusalem as its capital and the return of the refugees.

Cuba has also reaffirmed its unrestricted support for a comprehensive, just and lasting solution to the Israeli-Palestinian conflict, based on the creation of two States. This would allow the Palestinian people to exercise their right to self-determination and to have an independent and sovereign State with the pre-1967 borders, with East Jerusalem as its capital, and the right to the return of refugees.

The Greater Antilles has expressed in various international forums, to the Palestinian Government and people, its unwavering solidarity and support for Palestine’s accession to full membership in the United Nations. 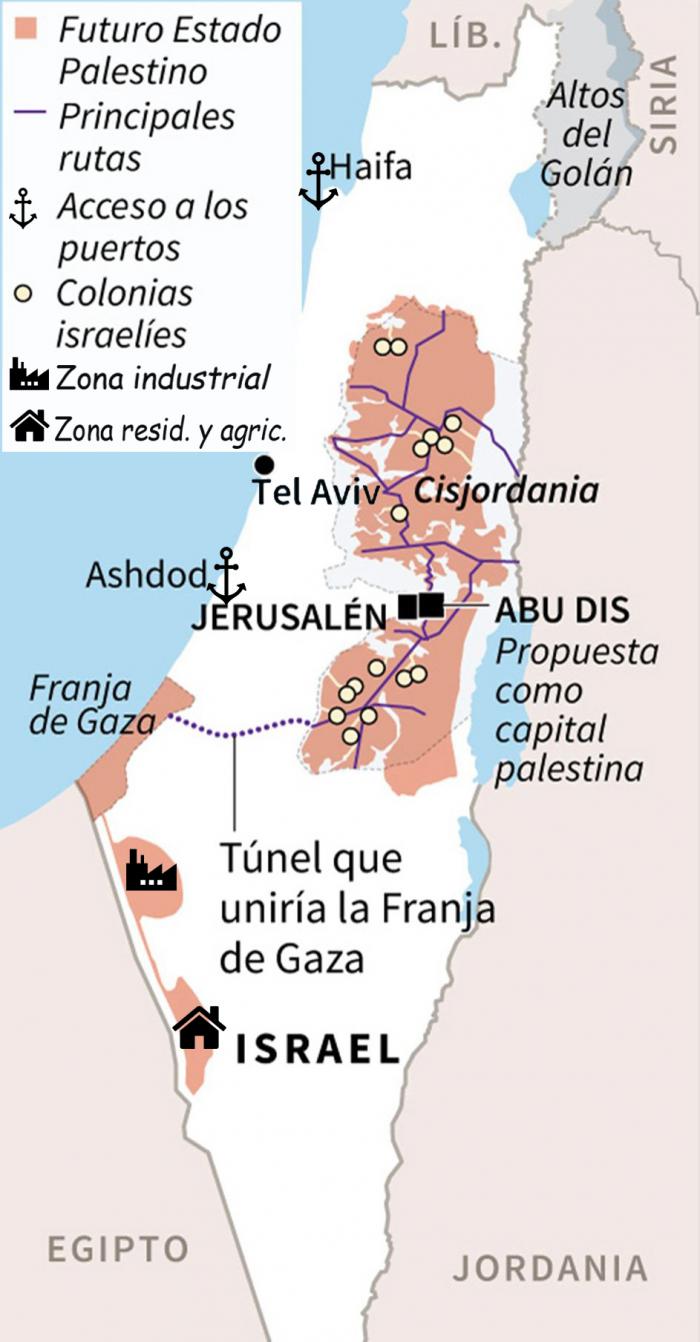 2 years ago GranmaPalestine-Israel0
Parasites, Trump and Gone with the WindThe Four-Step Commitment