Trump takes his politics to Tulsa

Trump went with his politics to Tulsa, scene of the worst massacre of African Americans in recent U.S. history.

In 1921 Tulsa, the city Donald Trump chose to resume his campaign for the presidency, was the scene of one of the most atrocious massacres in U.S. history against the Black community. Nearly a hundred years after the event, the facts remain virtually unknown to society. 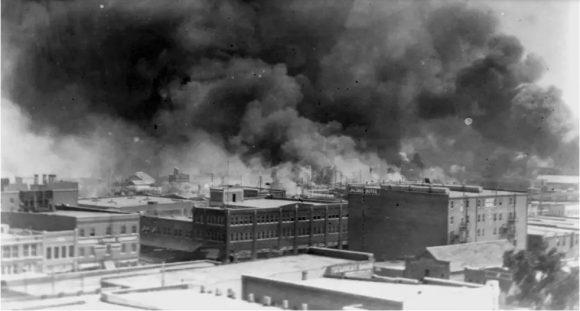 Donald Trump hit the nail on the head when he decided to resume his campaign for reelection in Tulsa, Oklahoma. Tens of thousands of his supporters await him there, but there is also a growing call for remembrance and justice from activist groups who remember that that city has not healed the wounds of the worst massacre in the country’s recent history against the African-American community.

On the night of May 31 to June 1, 1921, an entire neighborhood was razed to the ground and 300 black citizens were killed. The massacre began when a white crowd came to lynch a black man accused of sexually assaulting a white woman. That, supposedly, was the trigger for the tragedy, but history has revealed a much more perverse situation.

In the 1920s, the Greenwood neighborhood, a black enclave in the city of Tulsa, was noted for its economic prosperity. The distribution of land after the end of the American Civil War had benefited some African-American and Native American communities, and as a result Greenwood had become stronger, despite being segregated, like any black neighborhood at the time. 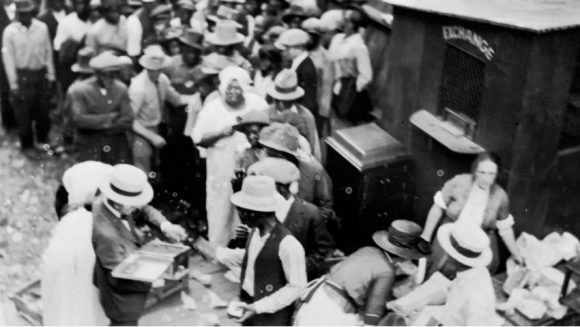 Archive image. A crowd of mostly African Americans lines up at the Exchange booth in Tulsa, Oklahoma, in 1921. © Reuters

From ‘Black Wall Street’ to a neighborhood in the ashes

Such was the commercial and economic success forged in Greenwood that it was commonly called the ‘Black Wall Street’, but soon its good fortune would bring it ruin. Members of the white community began to view their neighbors’ bonanza with suspicion and, interested in occupying their land during the railroad expansion, decided to attack the neighborhood.

On the night of May 31, a crowd of white men, supported by local authorities and even police, arrived in Greenwood and charged at the African-American population and their homes. The mob burned down homes and businesses to the point that when the situation calmed down hours later, at least 35 whole blocks had been left in rubble.

The blow took away the good fortune of the neighborhood forever. In the wake of the event, Greenwood’s recovery has been frustrated by the creation of laws promoting zoning or by building restrictions. Today in Tulsa, the social gap between blacks and whites is notorious. According to a Human Rights Watch report, poverty is almost three times higher among black citizens than among white citizens.

Archive image. A truck carrying soldiers and African Americans near the Litan Hotel during the 1921 Tulsa, Oklahoma race massacre. © Reuters

A Donald Trump rally ignites misgivings in a remote society

With Trump’s visit, originally scheduled to coincide with the celebration of Black Independence Day on June 19 [Juneteenth] and postponed amidst national protests against racism, the call for historical recognition of the victims and economic reparations for their descendants has intensified more than ever.

Less than a year before the 100th anniversary of the Tulsa incident, justice has yet to be established, despite the fact that the case has even been brought before the U.S. Supreme Court. Both lower courts and the high court have dismissed the claims. Currently, only two survivors of the massacre are still alive.

But Trump’s arrival has not only put the spotlight on a forgotten chapter of American history. His desperate attempt to revive in Oklahoma an image that has deteriorated in recent months due to the economic impact of the pandemic has highlighted the differences between his supporters and those who demand changes in the treatment of the African-American community.

“Any protester, anarchist, agitator, looter, or small-time person who goes to Oklahoma, please understand that they will not be treated as they have been in New York, Seattle, or Minneapolis. It will be a very different scene,” the president said before embarking on the trip to Tulsa.

The comment, which his critics call conflictive and divisive, comes at a time when the rejection of racial violence in the United States shows its greatest increase in decades, with weeks of massive demonstrations in multiple cities around the country that have also reached the doors of the White House. 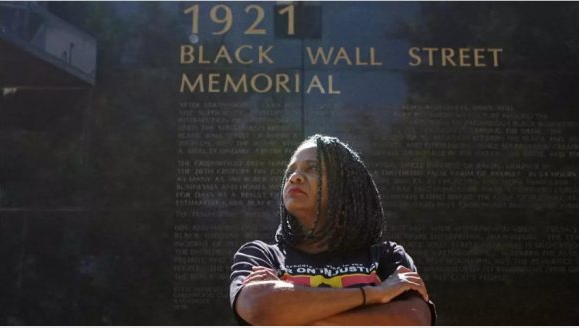