Trump’s Attacks on Four Congresswomen Because of Their Ancestry Repudiated

Trump generates a wave of outrage: absolutely racist and anti-American. It’s not something you should hear from the President of the United States. 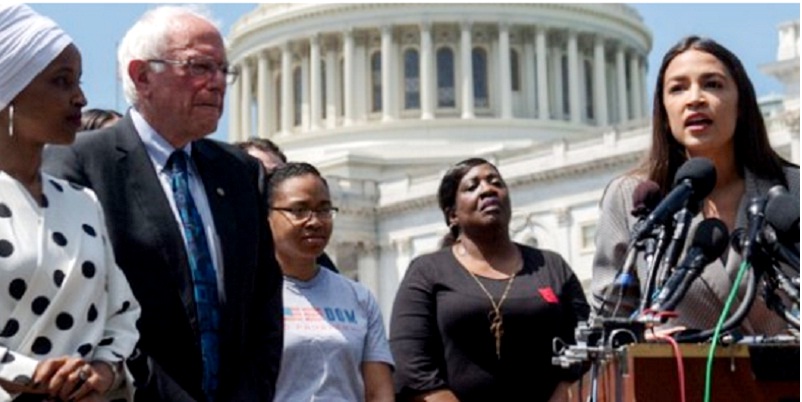 Trump Rejected As Anti-American and Racist.

Regeneration, July 15, 2019. A few hours ago, Trump attacked four congresswomen who lead the popular opposition to his government. It’s a series of Twitter messages where the U.S. president tells them to “go home.

Trump doesn’t say names, but it’s very clear who the attack is aimed at.

It is important to keep in mind that the words of today’s President, who tells four congresswomen of color to “return to their own country,” are the distinctive language of white supremacists.

Trump is comfortable leading the Republican Party into racism, and that should worry all Americans – Alexandria Ocasio-Cortez.

For her part, Senator Harris pointed out that the subject is old-fashioned and is still heard in the streets, but it is not something that should be said by the president of the United States.

“It’s absolutely racist and anti-American. And it’s an old trope – going back to where you came from that, you know, you might hear it on the street, but you should never hear that from the president of the United States,” Harris told the media.

“Return to your crime-infested countries,” wrote the U.S. president.

The response was not long in coming from dozens of Internet users, from citizens to politicians and the media.

“Attitudes such as these would be scandalous in any country in the world, but apparently, the American president acts outside of civility and proper political behavior,” postulates an American citizen.

The U.S. president does not name any particular person.

But among those mentioned would be Alexandria Ocasio Cortez, a New Yorker of Puerto Rican descent.

Among the reactions, there is no hesitation in describing Trump’s statements as “despicable” and “repellent.”

What is certain is that three of the attacked congresswomen were born in the United States and one of them arrived at twelve years of age.

In this sense, they accuse the statements of “unmasking once again their white nationalism, xenophobic and chauvinism .

-It’s disgusting,” she points out.

Women’s collective opposing the object of the attack on Trump

Trump would have dedicated this diatribe to the female collective known as ‘The Squad’:

Just like Congresswoman Rashida Tlaib, from Michigan, born in Detroit, has Palestinian parents.

In the case of Ilhan Omar from Massachusetts , who arrived as a refugee from Somalia at the age of twelve. And she was the first Muslim woman elected to the U.S. Congress in 2016.

The politics of division is how this Administration works. We are here to serve our country. Our families are here. Our children are here. We are here. I’m with my sisters. 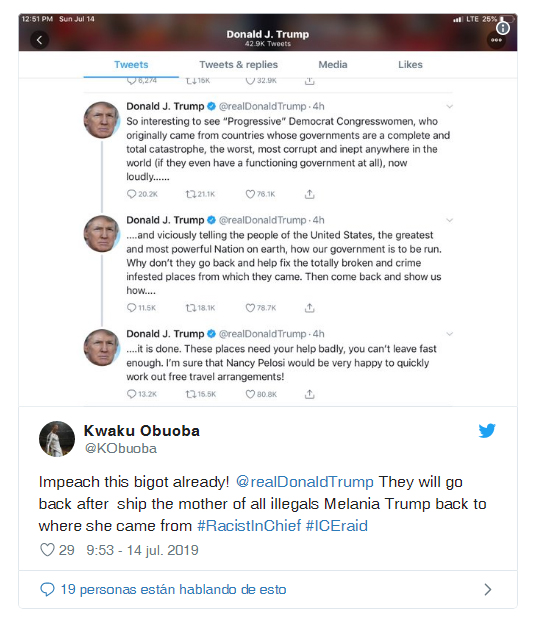 2 years ago Translationsracism, US Society0
A Humorous Exception in the US PressWashington Confirmed as Terrorist