Home There Will Not be Another Saint Louis

There Will Not be Another Saint Louis

There Will Not be Another Shame for Cuba like the St. Louis 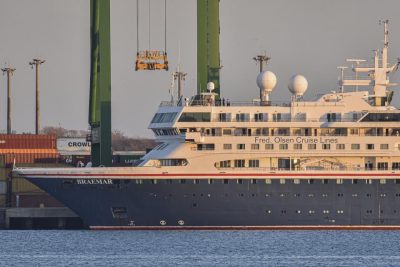 The news moved the ink: “Cuba authorized the docking of a cruise ship British with coronavirus…” According to Foreign Minister Bruno Rodriguez: “At the request of the British government, the Cuban authorities granted docking permission to the MS Braemar cruise ship, with some COVID-19 infected travelers on board. According to the minister: “This is a health emergency…

It later transpired that today, Tuesday the 17th, upon the ship’s arrival in the port of Mariel, a calibrated operation will be triggered as a watches to disembark all travelers, evaluate and offer medical care to the sick and airlift them to Gran Brittany.

It all started on Sunday, March 8th, when the cruise ship docked at the port of Cartagena, Colombia where, along with other passengers, an American woman landed. When examined at a center city doctor, she tested positive for the coronavirus.

Unaware of the situation, the cruise ship MS Braemar, set sail for Willemstad in Curaçao and Bridgetown in Barbados, where they were denied the entry. On Wednesday the 11th, the ship’s owner’s firm was notified of the passenger’s situation and immediately issued a statement in which he reported five other cases on board. The same day, the cruise captain asked the harbor master of Cartagena permission to return which was denied, which also happened with the Bahamas.

According to CNN, on Sunday afternoon, 15 British officials made intense and unsuccessful diplomatic efforts to find a country willing and with appropriate infrastructure to receive the ship in which 1,513 people are traveling. In addition to the British, among the passengers, there are Canadians, Australians, Belgians, Colombians, Irish, Italians, Japanese, Dutch, New Zealanders, Norwegians and Swedes.

On the ship, which at the time of the order was anchored 25 miles in the Bahamas, there are four passengers and one crew member positive for COVID-19. Other people, including a doctor, are subject to quarantine after presenting symptoms. In this case, it is for practical reasons because the cruise is about 4,000 miles from England where it would take several days to arrive and about 500 from Havana, so in about a day and a half of navigation the sick passengers will be under Cuban medical coverage and soon after, those who are re-marked, they will arrive in their country.

Although devoid of the dramatic and petty nuances, the situation of the cruise ship MS Braemar has reminded me of the tragedy experienced by the passengers of another ship, the St. Louis, which, in 1939, instead of to be welcomed in Havana, was rejected, so they ended up in the concentration camps and crematoria of Nazi Germany.

During World War II, in the face of persecution in Germany, there was an exodus of Jews to the United States. At that time there was a quota system for migrants that was not extended. In that context, there was an arrangement, according to which they would travel to a nearby country and wait there to be allowed to enter North America.

Under that understanding, in Hamburg, 937 passengers boarded the Saint Louis, which on May13, 1939 set sail for Cuba. All had permits to land in Havana with refugee status. On the 23rd of the same month, in the Cuban capital the captain received the news that the permits sold by a corrupt immigration director, were overruled by the president Federico Laredo Brú. Bru agreed to issue others at a cost of $500 dollars per person, an amount that only 29 passengers could pay.

In view of the refusal of the United States and Canada to take in the unhappy travelers, scarce water, food and fuel and with the  crew virtually mutinous, the ship’s captain decided to return to Europe. In the port of Antwerp, Belgium, exhausted and terrified, the unfortunates of the St. Louis who lived the illusion of being welcomed into Havana.

According to reports, the British cruise ship will dock in the port of Mariel where directly, without any contact with the Cuban population, and, under strict medical and epidemiological supervision, will board buses to Terminal Five of the capital airport, which was destined and prepared for special operations, in which they will be taken by two planes chartered by Great Britain.

On social networks, in Cuba and elsewhere, both people who are bad intentioned as well compatriots acting in good faith, expressed critical opinions. It’s their right, but in this case, more than rights, it is the duty to assist others at risk, following rules that preserve the safety of the minimum number of people involved. COVID-19 shouldn’t make us any worse. See you there.

2 years ago TranslationsSt. Louis0
Movies and the CoronavirusAnother Brick in Roger Waters' Wall