Home The Virus of Inequality

The Virus of Inequality

Two reports warn of a truth, the deadly Covid-19 pandemic has increased inequities and global differences and although anyone can get sick, those with lower incomes add up much more in the statistics, are poorer and will have less access to the hopeful vaccine … 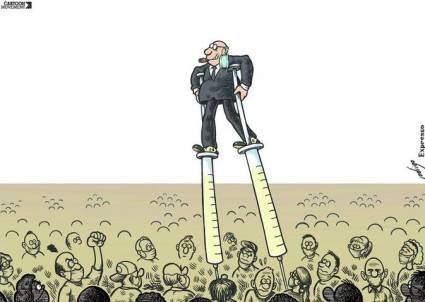 The combined wealth of ten of the world’s richest people could pay for vaccines to immunize everyone Author: Twitter Published: 02/02/2021 | 03:38 pm

Oxfam has been adamant that the combined wealth of the world’s ten richest people could pay for vaccines to immunize the entire world. At the same time, the International Labor Organization stated in a report that the Covid-19 pandemic has caused the loss of 255 million jobs.

Social inequity, unequal opportunities to access goods and services such as housing, education or health are among the consequences of the world’s health situation, where more than 103 million people have fallen ill and more than two million have died, and the count continues, while the vaccines already in use, which are not enough and are the object of disputes between first world countries that can afford them and are among their manufacturers, do not seem to be distributed fairly….

Those who have called it the virus of inequality are right. Here are some data that prove it.

The Oxfam report is titled “The Inequality Virus: Reuniting a coronavirus-torn world through a fair, just and sustainable economy,” and it announces all that it means and is needed.

Paul O’Brien, vice president of Oxfam America, in an interview with Democracy Now, noted of the pandemic situation: “The 10 richest people ended up making half a trillion dollars during the pandemic. The richest thousand got back all the money they lost in the pandemic, and they reached the same level of wealth in nine months. But at the same time, it has been disastrous for people at the extreme end of poverty.”

The report of this international confederation of 19 non-governmental organizations, which carry out humanitarian work in 90 countries under the slogan “working with others to combat poverty and suffering”, as they describe it on the Internet, warns that in the face of these exorbitant profits of billionaires, poor people will not recover from the economic and health crisis for at least a decade. If it does, it should be noted.

“In every country we looked at, inequality has worsened during the pandemic,” O’Brien added.

The Economic Commission for Latin America and the Caribbean (ECLAC) pointed out that this economic crisis and the slow exit from it will lead to the closure of 2.7 million companies in the region alone and some 8.5 million more workers will lose their jobs, in an emergency that by 2020 had already led to a significant drop in growth and economic contraction.

The economic recovery will be fragile and uneven, is the sharp forecast of ECLAC; the painful conclusion for millions of Latin Americans and Caribbeans who were already going through a limited growth, to which now add the consequences of the pandemic as the lower export of raw materials and the collapse of tourism, among other indices in decline.

ECLAC’s Executive Secretary, Alicia Bárcena, added other significant data in red: 54 percent of the region’s labor force does not have social protection or access to public health services.

Of this proportion, 57 percent are women, and this index added an aggravating factor that is reproduced in other regions of the world, even in developed countries. The International Labor Organization also brought its concerns to the 51st World Economic Forum in Davos, which met virtually this week and not in its usual snowy retreat in the Swiss Alps.

Globally, the pandemic cost workers $3.7 trillion in lost income and the destruction of the equivalent of 255 million jobs in 2020, four times the impact of the 2009 global financial crisis, the ILO reported.

But the summit meeting of politicians, businessmen and representatives of social and cultural organizations, which this time did not take place as usual in Thomas Mann’s Magic Mountain, did not exactly provide prodigious solutions at a peremptory moment for the planet. On the contrary, the widespread resurgence of the coronavirus, and even the new strains, highlighted the old weaknesses of health systems around the world, the injustices, the inaccessibility to medical care and vaccination that should be for everyone.

The slogan “The Great Reset” was crushed by an avalanche, and in this January 2021, as in the novel of the great writer, the problems discussed at the Davos Forum and the lack of intention to address them from what is fair, can be seen as the decadence of a way of life where the selfishness of those who only count profits in their finances over world health takes precedence.

The pandemic is conjunctural, although of extreme gravity. That is why its combination with structural problems, the same ones year after year, multiply the effects of inequity.

Check it out in these statements by Ursula von der Leyen, president of the European Commission, when the bloc intensified stricter monitoring of vaccine exports to countries outside the union. This is the case of the United Kingdom, because they had invested billions of euros and that “companies must now deliver” their vaccines to the 27 member states. “… We will set up a transparency mechanism for vaccine exports. Europe is determined to contribute. But it also means business.”

Ultimately that is the transparent truth,. The EU is a union of high-income rich countries, home to 342 billionaires; however, 123 million people at risk of poverty also reside there, Oxfam reported.

So what should we leave for the always neglected Africa? Cyril Ramaphosa, president of the African Union and of South Africa – one of the countries most affected by the coronavirus and even contributing a new strain, apparently of greater spread and lethality -, during his speaks at the 51st edition of the Davos Economic Forum, rightly criticized what he defined as “vaccine nationalism”, that is, the implementation of this selfish and inhuman attitude of hoarding, which hinders an equitable distribution of vaccines. “The rich countries of the world went out and acquired large doses (…) Some even acquired up to four times more than what their population needs excluding other countries”, a denunciation that he joined to the substantial comment: an increase in poverty is “expected for the first time in decades” and added, “the challenges we face were not created by the virus, they were created by us”.

You and I are not “us”, it is clear who fall into that category in the current pandemic and in the ancestral ills of that continent, the most powerful nations of the world that were colonial or neo-colonial empires.

The AFP news agency commented in this regard that bilateral agreements between governments and companies manufacturing vaccines against the Covid-19 virus could raise the prices of the drug and limit its supply to some regions.

Of course, the EU is not alone in this hoarding, where the United States and Donald Trump’s promise-threat that his country would be the first to be immunized and the willingness to buy all the vaccines produced in the world takes the lead.

Ramaphosa ratified the necessary denunciation: “We are concerned about vaccine nationalism (…) The rich countries of the world are holding on to these vaccines and we say: release the excess vaccines you have ordered and stockpiled”.

However, the African continent, with some 1.3 billion inhabitants, barely completed 600 million doses of the international vaccine Covax, under the aegis of the WHO, which is also being requested by the rich countries.

We are faced with the confirmed presence of inequality in the midst of the terrible coronavirus.