Home The Truth About Batista

The Truth About Batista

The Truth About Batista

He was a pawn who implemented the policies for the region, advised by his mentors. His masters provided him with solid material support and military advice. 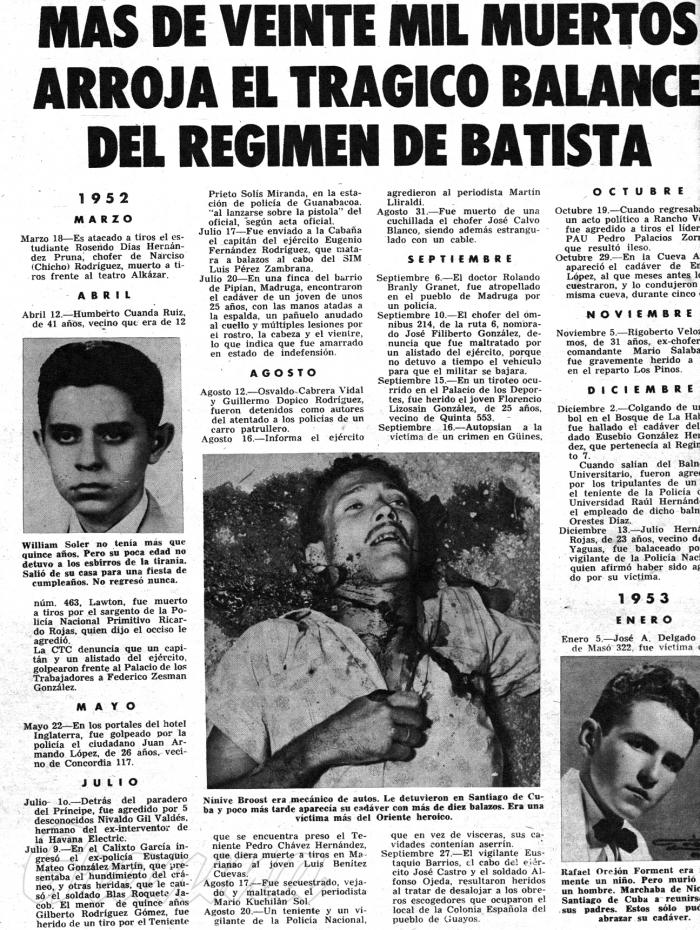 Lie, lie and lie some more. This is the line of the anti-Cuban media in South Florida, when dealing with the subject of the Island, in terms of current affairs, but also of the past.

For years, television networks, radio stations, websites and newspapers based there have, among their discursive guidelines -although the matrix has intensified notably during the last few weeks-, the vindication of the bloodthirsty tyrant Fulgencio Batista.

Throughout January and February 2022, there was a congestion of articles, comments and interviews with relatives of the dictator or alleged experts on his “legacy”. What has been said in such spaces about this terrifying character in Cuba’s history is so absurd and mendacious that it borders on delirium.

Any saint’s life would be dwarfed by such an avalanche of falsehoods aimed at ennobling the abject figure. But to really know who Fulgencio Batista was, it is not even necessary to go to “the history written by the communists”. The truth can even be found in the Western media, books and statements by high-ranking officials in Washington.

In 1952, this gentleman established the bloodiest and most corrupt dictatorship ever known in Cuba, with only the precedent of Gerardo Machado’s satrapy in terms of a criminal record.

Known for his previous work at the helm of the country, both because of his past as a coup leader and his pro-Washington fervors -demonstrated since his alliance with Ambassador Sumner Welles in 1933-, the 1952 uprising had the full backing of the U.S. Government.

He was a pawn who implemented the policies for the region, advised by his mentors. His masters gave him solid material backing and military advice, similar to what they did, years later, with the Pinochet misrule in Chile, after the coup against Salvador Allende.

U.S. investments would reach one billion dollars in Cuba throughout his term of office. The visits of then Vice President Richard Nixon and Allan Dulles, director of the CIA, in 1955, served to strengthen the empire’s economic and ideological programs on the island.

Dulles told the tyrant of his government’s concern about communist activity in Cuba, in response to which the dictator inaugurated, in a few weeks, the Bureau for the Repression of Communist Activities (the dreaded BRAC).

The “creature”, together with the no less dreadful Military Intelligence Service (SIM), the National Police and the Army, turned the country into a police state, in whose vortex people lived in permanent anxiety and where political disaffection was punished with death, without half measures.

Meanwhile, the U.S. mafia turned the night and gambling business into another empire in Cuba, called “the brothel of America”, a subject on which valuable research has been published.

Everyone in the north, bandits included, Batista had a free bar here. Thus, he sponsored the great assassins of Latin American history (Conrado Carratalá, Pilar García, the Salas Cañizares brothers -Rafael, Juan and José María- and Esteban Ventura Novo) and cohorts of criminals to defend his sinister political structure.

They were “men of base instincts, born criminals, beasts carrying all the ancestral atavisms dressed in human form”, to put it in Fidel’s words, who put the nation on edge and, especially, its youth, who died with their eyes gouged out, without nails, their testicles burst or raped, in barracks, ditches, wastelands, rivers, seas.

In his reign of “blood and plunder” -terms used by journalist Enrique de la Osa-, corruption surpassed all historical standards of a nation already expert in the matter. Batista, by himself, raised his presidential salary from 26,400 to 144,000 dollars, even higher than that of U.S. President Truman, whose salary was around 100,000 dollars.

However, a large part of the Cuban population was unemployed, while the majority of the peasants lived in huts with guano roofs [guano is the excrement of seabirds and bats] and dirt floors, with no sanitary services or running water. Meanwhile, 90% had no electricity.

As the French professor, Salim Lamrani states in his essay 50 truths about the Fulgencio Batista dictatorship in Cuba, the English economist Dudley Seers wrote that the situation in 1958 was intolerable: “in the countryside, social conditions were appalling. About a third of the nation lived in squalor (…) living in barracks, usually without electricity or latrines, victims of parasitic diseases and did not benefit from a health service.

“They were denied education (their children went to school for a year at the most). The situation of the precarious, installed in temporary shacks on collective lands, was particularly difficult (…). A significant proportion of the urban population was also very miserable”.

Arthur M. Schlesinger, Jr., personal advisor to President John F. Kennedy, wrote: “I loved Havana and was horrified by the way this lovely city was unfortunately transformed into a great casino and whorehouse for American businessmen (…). One wondered how Cubans – seeing this reality – could regard the U.S. in any other way than with hatred”.

This was the Cuba of misery, blood and terror imposed by Batista, the “beatific” president they now want to sell us from Florida. Just the thought of such a past redoubles our strength in the struggle to never go back to such a desolate scenario.

9 months ago Granma, TranslationsFulgencio Batista0
Ukraine and the spark of DonbassMINREX: For international peace and security