Home The New Generations and the Gift of Ubiquity 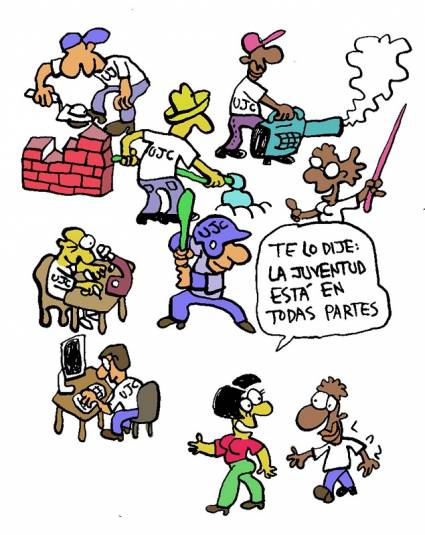 When one attends a youth meeting and listens to its participants discuss the varied and complex palette of issues that color contemporary Cuban society, one appreciates that the word future transcends mere rhetoric to become something accessible and concrete in what they believe in. “Your future, today,” says their motto.

At the 11th provincial stocktaking assembly, the “Future of Cuba. Congress of the Union of Young Communists (UJC) of Las Tunas, he took the microphone and expressed his ideas for a good part of the social spectrum of the territory: students, teachers, peasants, workers, leaders, technicians, religious… It is that the young people of today seem to be in possession of the gift of ubiquity, that which favors being present everywhere at the same time.

Rafael Alberto, a cooperative member from the Jesús Menéndez municipality, revealed the “secret” of how he managed to make his base committee grow with six militants: by making them fall in love with the day-to-day work of the organization. He spoke of the link between the agricultural work on his farm and academic programs, and of Cubasolar’s contribution to taking advantage of renewable energy.

Julio César, a doctor from Majibacoa, spoke of the potential of a grassroots committee to make itself felt within its radius of action: they collaborate in the construction of an old people’s home, work in a productive area, organize circles of interest, and train in the fight against drugs.

Yuniela Comendador González, president of the Martí Youth Movement at the University of Las Tunas, told how they use social networks to disseminate the work of Cuba’s National Hero. So, they called for a selfies contest and uploaded the winning photos to their Twitter and Facebook profiles.

The role of the UJC in these times was the topic addressed by Eduardo Antonio Rondón Martínez, president of the FEU at the University of Medical Sciences. “We militants have the duty to leave prepared in the academic, but also in the political and ideological [sense] And to be willing to go where we are needed once we graduate. And to bring optimism to the communities”.

Elizabeth de la Cruz, from the Construction and Assembly Company, told how militants from her center – and others who are not yet militants – have made voluntary work with the victims one of their calling cards. Even the micro 8 in Santiago de Cuba were some to contribute to the construction of houses. And they also traveled to Havana when the tornado hit several of their communities. In Regla, they left the indelible mark of their solidarity.

Speaking in the discussion, Susely said that “among the admirable things about this assembly is that no comments are like any other, and that there is a correspondence between what they say and what you do every day. We must fight on all fronts. And today social networks are an important front. From that space we must also fight the enemy. And be alert to any sign of manipulation.

For his part, José Ramón Machado Ventura made clear the absolute confidence the Party has in the vanguard youth organization. This is all the more so at the present time when the process is underway. In his words he endorsed what the participants had said, encouraged them to continue and said: “We know we can count on you”.

The assembly constituted the delegation of the province for the final session of the 11th. At the same time, it elected the new Committee and Provincial Bureau of the UJC, at the head of which Anier Arnedo Sánchez was confirmed as the first secretary in the territory.

1 year ago Juventud Rebelde, TranslationsUJC0
Diversifying IT Services and Making Them ExportableBernard Sanders and the Ides of March