Home Bernard Sanders and the Ides of March

By Ramón Sánchez-Parodi Montoto
He was appointed head of the Cuban Interests Section in the United States, between September 1977 and April 1989. He then served as Cuba’s deputy foreign minister until 1994. And from then on he served as Cuban ambassador to Brazil, until 2000. In addition to his activities as a Cuban government official, Sánchez-Parodi is a journalist and writer.
March 13, 2020 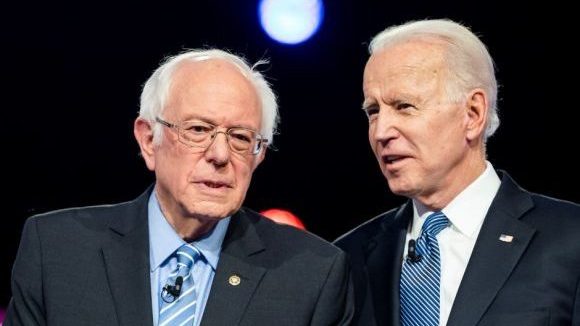 Sanders and Biden vying for the Democratic nomination.

The results of the primary on March 10 certainly point to Joseph Biden becoming, in less than two weeks, the absolute frontrunner among the Democratic contenders for the highest office in the United States. Biden is now assured of the necessary and sufficient conditions to accumulate the support of the 1,991 delegates that will guarantee him to be proclaimed on the first ballot at the Democratic National Convention (July 13-16 in Milwaukee), as the Democratic Party candidate for the presidency of the United States.

Senator Bernard Sanders, the only other contender still active in his presidential bid, has only an open arithmetic probability of accumulating the number of delegates to be nominated as the Democratic Party’s candidate. Since that option is practically unattainable, Sanders has only to give up his aspiration. Therefore, the question to be solved is how and when Sanders will give up his electoral efforts. That decision will be the result of discussions and negotiations, not necessarily public, between both campaign teams, the two challengers and the Democratic leadership.

Among the issues to be considered in these decisions is the time factor, which has begun to run since the March 10 primary results, especially in Washington and Michigan. [These are] states where Sanders was unable to repeat the magnitude of his 2016 primary victories over Hillary Clinton. This decision is important. Once it is made, it will change the pace and content of the election campaign because the cross-party confrontation will be over and the confrontation will be between the Republican Party and the Democratic Party, and particularly between Donald Trump and Joseph Biden.

Michigan is a state in the north-central part of the country and will be one of the most disputed states next November. Sanders had won it in the 2016 primaries against Hillary Clinton, when he beat her by winning 49.68%, with a lead of about 18,000 votes. [This time] Biden beat Sanders by more than half a million votes and more than 16%. In Missouri, Biden received 60.1% of the vote against 34.6% for Sanders and a lead of about 170,000 votes. In Mississippi, a state with a very large African-American community, Biden won with 81% of the vote, which is equivalent to more than 160,000 votes.

The results of the Washington primary were disappointing for Sanders. There he had defeated Clinton in 2016 when the election was held in the form of a caucus with 72.72% of the votes. Now he won again, but by a slim margin of 0.2%. The other victory was in North Dakota, which only brings a total of 14 delegates to the National Convention. The victory (if you can call it that) was by a margin close to 14% and less than 2,000 votes ahead: By 2016 Sanders had won that state by about 19%.

With these results, the idea is gaining ground in the minds of Democrats that the goal to be achieved in the November election is to prevent Trump’s reelection, putting aside differences over the electoral agenda on issues such as health care; the establishment of a tax on the rich; the solution of the problem of the university debt; the changes in the national security system and other measures proposed by the “progressives”, “socialists”, “communists” (choose the adjective that you find most convenient and appropriate) that the representatives of the “establishment” consider “radical” and “threatening” to society.

In fact, the results of the primaries held on February 29, March 3 and March 10 are a direct effect of the fears that the dominant sectors within the Democratic Party had about the possibility that Bernard Sanders could accumulate enough delegates to be nominated as a candidate for the presidency in the elections next November. In the last two weeks, we have witnessed an incessant media campaign and political pressure on the various Democratic groups to close ranks and “stop” Sanders.

The problem for the Democratic leadership is how to make this campaign bear fruit in November by transforming it into a mass movement to express at the polls the will to prevent Trump’s re-election.

For now, we can only wait for the “dust” of this political storm to settle so that we can glimpse the future of the current U.S. election campaign.

2 years ago CubaDebate, TranslationsUS politics0
The New Generations and the Gift of UbiquityNo One Can Ever Bury Marx