Home The Essence Hidden Behind the Clown’s Nose

The Essence Hidden Behind the Clown’s Nose

The Essence Hidden Behind the Clown’s Nose

The trivialization of the art of clowning is a widespread phenomenon in our society, rooted essentially in its conversion into a lucrative business. 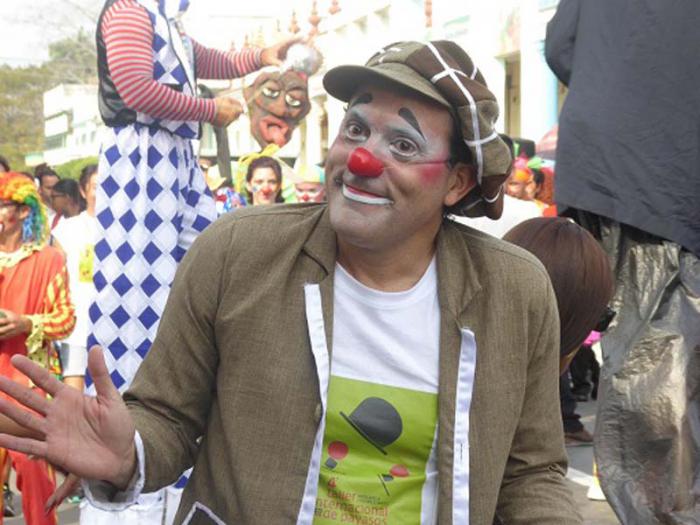 A unique music sounds and at its rhythm, the picturesque character comes out, dressed in big shoes, colorful clothes, a funny wig or hat, painted face and the unmistakable red nose. He or she stumbles forward, laughs loudly and always has a joke up their sleeve.

Surely, if we were to conduct a survey of the Cuban population about their idea of what a clown is, the descriptions would more or less revolve around the one we presented at the beginning of this report. I can bet that most people would think the question was a little silly because who doesn’t know what a clown is? But this is accompanied by another question: do we really know?

We are not far from the truth when we say that behavior and clothing largely define a clown, but they are only its superficial shell. Behind that peculiar being that we see before us, there are other elements that make up its essence and that, unfortunately, have been diluted in the limbo of having certain acting qualities, some vis comic and the idea] that with that they are already suitable to make people laugh.

However, a deeper approach to this subject allows us to understand that clowning is an art that has become trivialised and commercialised in our society. Many have turned it into a lucrative business, to the detriment of the most important function of the clown: touching human sensitivity.

From the opinion of well-known personalities of Cuban theater and some of the most faithful exponents of this type of acting, Granma approaches the dilemma of the true differences between the clown who is sustained only in the material interest, and the one who starts from the actor’s ethics, the conscious dramaturgy and the need to transmit true messages to the people.

HOW DO YOU BUILD A CLOWN?

It is not necessary to be a theatre specialist to understand that any actor or actress, when she or he plays a role, if she or he does so with responsibility for her or his art and the unavoidable commitment to the audience, is capable of changing her or his skin. During the time that a production lasts, it assumes another life, other conflicts, another reality.

Building a character doesn’t mean it’s anything like him. In other words, it is possible to assume values, ways of acting, norms of behavior, even a temperament that has nothing to do with the actor’s true personality. In the case of the clown, although there must be the same level of responsibility, ethics, and commitment, the clown and the actor are the same person. The one cannot exist without the other.

This is what a man who, like many others, began as a clown for parties and birthdays, but then decided to take a step forward, because he understood the need to dignify such an ancient and vilified art. Perhaps this is the greatest merit of the group he founded and which today has become a paradigm of clowning in Cuba, Teatro Tuyo. Ernesto Parra, its director, knows very well what the birth of a clown is all about. 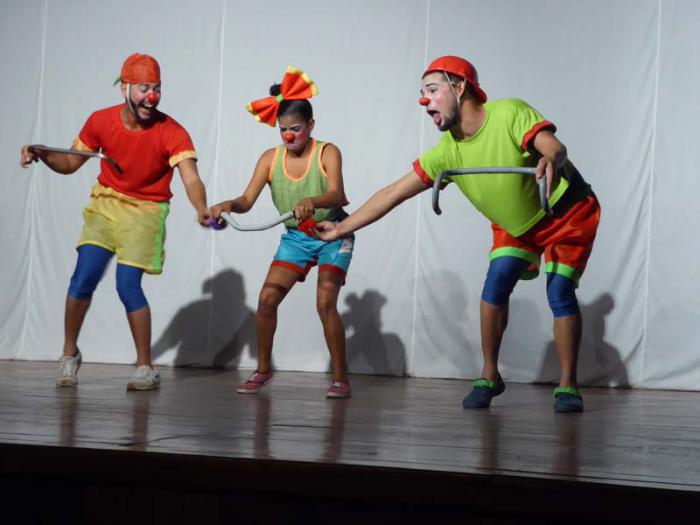 A clowns show needs dramaturgy, aesthetics and a conscious exercise on the part of the actor pursuit of the message, as in any other theatrical form. Photo: Leidys María Labrador Herrera

“Actors in our profession have the ability to approach lives from a character. The actor in the dramatic theater is going to play the role of a doctor and does not necessarily have to have studied medicine, he can play the role of a drunkard and be a teetotaler, but in the case of the clown the difference, which is not tacit, but only the adaptation to this concept of acting, is that yes, we are playing a character who is the clown, but it has been made with the actor’s own characteristics. There is no distance between the character I am going to play and the person I am.

“In any case, the actor who plays a clown, whether it be on a birthday, in a theatre, in a circus… when the performance is over, is once again the normal person who goes home to face his routine. What happens is that this character is constructed from his own psycho-physical characteristics. The mythical example is that of Charles Chaplin, who built a Charlot, the little tramp, through his own experiences.

A similar opinion is shared by young Adrián Bello Suárez, who has carried out all his acting growth in Teatro Tuyo.

“My clown’s name is Belo, and I started to find him after I had been in the group for some time. In fact, I’d say he’s still a long way off. I have drunk from Belo and Belo from me, I could tell you that we are walking hand in hand along the same path. Because that’s what the art of clowning is all about, of finding the clown that we all have inside us which is unique for each person, and building it with your own emotions, feelings…”.

Such experiences show that playing a clown is more than just having a red nose. Perhaps it is from this ignorance that the superficial vision of those who believe that dressing up in colorful costumes and stumbling senselessly is to be a clown.

THE DEFORMATION OF THE REAL CLOWN

The children are seated awaiting the presentation. The birthday boy’s parents are also anxious to see the protagonist who, frankly, has a tight budget The time comes, but there is no music of bugles or cymbals, what begins is the thunderous reggaeton and the clown comes out wagging his waist in an act that has nothing to do with comedy but borders on the obscene.

I’m not saying this is always so. We cannot commit the sin of absolutists and say that all those who today entertain in children’s parties act in this way. But how many of us haven’t had regrettable experiences like that? The saddest thing is that this person continues to do his “job” and we continue to open the doors of birthday parties to him.

For Rubén Darío Salazar, director of the “Teatro de las Estaciones” group, this process implies a step backwards when talking about clowning.

“The art of clowning in our region, and in Cuba specifically, has suffered a regression. This is because it is something that many people feel entitled to do without, schooling, without training. They think they can just play the clown without any of that. But the worst part is that people believe it, and they are paid and hired and they cause a distortion in the profession.

“Being a clown has long been an art form looked down upon, and I don’t know why, because we have had in our country people with a powerful history in clowning, like Edwin Fernandez, known as Trompoloco. He was an actor who played the clown with a mixture of impressive lyricism and satire. I believe that this has been lost, it has been deformed, it has been devolved, without any of us noticing that the art of clowning is the new comedy, if we take it seriously, with the discipline and commitment it demands”.

Ernesto Parra himself has a similar opinion. He says the trivialization of the art of clowning is a resident problem in today’s Cuba, especially when the real perspective of any actor performing a clown is lost, driven by economic need.

“We cannot say that the art of clowning is made in a single way, nor that it has these or those typical characteristics. The clown genre, according to the master Dario Fo (Italian actor and writer, recipient of the Nobel Prize for Literature), is the preparation of an artist who becomes a total actor and is the one who transmits, through humor, not as an end but as a means, an emotion, poetry, an idea, tackles a problem. It is not the stereotyped clown, of screams, of colourings, of jumps, of falls, of stumbles. Although they are elements that he uses to construct his dramaturgy, they do not constitute his main objective. That is to say, to take the spectator by the hand to arrive from humor to touch the soul and to move”.

Emptiness, lack of real, direct communication with the public, and in many cases, a total lack of tools to enrich the character, are some of the most common aspects when analyzing this phenomenon of the “multiplication” of clowns. The sharp vision of the master Roberto Gacio, who is a theatre institution in Cuba, allows us to evaluate some of the most notorious weaknesses that these clowns face.

“It is necessary to investigate, deepen, and be in a very serious position to transmit messages, not so much from social reality as from human existence. This, like other phenomena, is also marked by the loss of values, the lack of interest in personal and collective improvement and, of course, the economic factor.

“The way to save the clown’s art is to realize that you have to say things out of sensitivity, out of humanity. The clown and the clown, in general, are also like big children, who talk about serious adult things or children’s things, but with a lot of tenderness”.

Logically, like other similar dilemmas that take place within all artistic expressions, this process cannot be seen as alien to the social context, nor divorced from everyday realities or the way people perceive the world around them. These are aspects to which researcher, theatre critic, and director of the magazine Tablas-Alarcos, Omar Valiño Cedré, attaches great importance.

“There are two different dimensions to the problem. The abundance of clowns, which in reality there are not, should not be seen as excessively pernicious. It is simply an economic reality, in which people who have a certain capacity for animation, entertainment and the world of acting, seek that economic reinforcement for their profession, although they are not necessarily  clowns [themselves]; and of course, there is the dimension that Teatro Tuyo and other artistic groups and entities represent, which is the dimension of the real clown, of the clown as a very singular priest of the performing art.

“Being a clown is the greatest thing in the performing arts. A real clown moves an amount of energy, of metaphors, of symbols, of abilities around him that is hardly achievable with any other scenic material. I believe that the challenges are, for all those who want to evolve from one side to the other, to know technically, spiritually and intellectually, what a clown is and how to train. Knowing how to be up-to-date, how to be effective in terms of communication and how to establish new pacts, new links with today’s public that is not the same as it was a few years ago”.

That is precisely the perspective of a group that has managed to fill theatres, to be loved by young and old and become an obligatory reference point whenever there is talk in Cuba of the worthy profession of the clown.