Is Beauty an Advantage at Work? 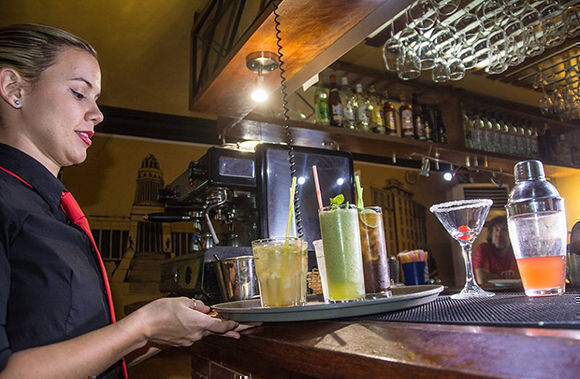 Is Beauty an Advantage on the Job for Women in Cuba?

It is true that today, the image of the person seeking a job competes in the employment market, and I am not talking about Europe or other countries of the so-called first world, also in Cuba when we read an advertisement for employees they put as requirements that they be young, tall, good-looking and white, because there such a discrimination is exposed clearly.

For those employers, especially restaurants, bars, coffee shops, places where tourists are catered to, voluptuousness and roundness of the female body have are picked first when making the choice or is it casting? Yes, because it seems that she was a selection for an artistic role in television or cinema.

They know that women constitute a priority target for advertising. These ads highlight a gender stereotype , in which it is indispensable to be young, beautiful and slender . In other words, they persist in the idea that a girl can live off her beauty and her body and leave aside her intelligence.

The image, the appearance are subject to canons of beauty mediated by the industry itself, greatly constrains job possibilities, especially in those areas of work that imply public exposure. The accent is not placed on the professional capacity of the women, but only their physical aspect is emphasized.

And, the worst is that you can not do much or anything against those who do not hire you because you are ugly, older, or black, because you will not be able to prove it, as employers argue other subjectivities which are hard to prove. 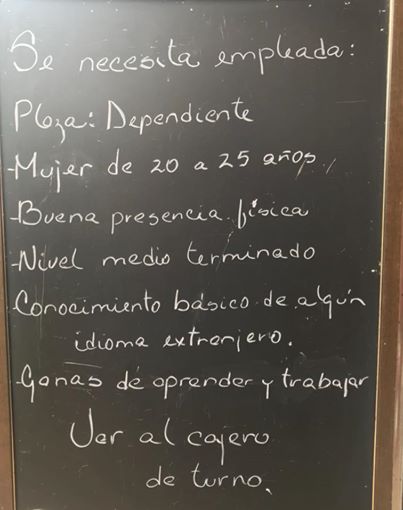 Among the requirements sought are age and it is spelled out that they prefer youth to experience; marital status, because being single and without family responsibilities or children in your care represent points in your favor; be a beautiful and attractive young woman and send a photo in a resume that may not say much professional about her qualifications, but a profile in which beauty stands out.

In advertisements, published mainly on job websites, you can see the age range that employers ask for: 80 percent of them are up to 35 years of age.

They are not interested in those who are called geeks, that is, enthusiastic to the point of obsession with knowledge, knowers and lovers of technology issues, or those who do not have that name but are cultured, educated, are characterized by their seriousness to work and are recognized for their performance and productivity.

The search for girls with a pronounced bust, a narrow waist, a beautiful face, slenderness and marked flirtatiousness that make the client’s neck turn is setting a trend. It leaves those who do not have those attributes at a disadvantage, but above all, encourages discrimination and strengthens the stereotype of women as an advertising and sexist object.

How To Link Young People to Study and Work

Social Workers considered this social problem in territorial evaluations and agreed that it has to be faced by all factors.

Las Tunas.-Nationwide, 2008 was the best year ever with regard to the reintegration and incorporation of young people to classrooms or workplaces. But, it has not yet reached all young people who neither do one, nor the other.

This statement was made by Enrique Gomez Cabezas, head of the social workers program in the country, during the provincial assembly of these professionals. The assembly analyzed the performance of this important program of the Revolution during 2008.

The most debated issue was, without doubt, young people who neither study nor work. Participants made a profound analysis and agreed that it needs a multi-factor approach. This is logical, because it is an issue that has a high priority today.

“We need to establish a link with the community, so that the different factors can keep us informed in a permanent and rapid way of the situation of the universe of their young people,” said Gomez Cabeza. He added that the work has to be personalized because there are no two cases alike. “Until we achieve this, we won’t have arrived at total results “, he said.

An aspect of the problem that received particular attention during the evaluation was the time period in which the identified cases must be dealt with. It is not enough to have the names of the young people in this situation. What is urgently needed is to work with them and resolve their situation.

Edgar Fernandez, from the municipality of Jesús Menéndez, took the floor to clarify that social workers have an enormous job before them regarding unemployed young people. He added that lots of creativity is needed to deal with it. And, that it depends on the links established with the family and the environment of the young person in question.

Cabeza Gomez took the floor again to remind participants that to have the healthy, just society we want to build, we can not have people that do not contribute anything to the country in terms of employment. He added that, in fact, many cases are very difficult and seemingly impossible to solve, but you can not dismiss anyone. We need to detect, identify and take care of them. “You have to be the social microscopes Fidel spoke about,” he said.

Yariri Torres, from the Amancio municipality, spoke about the usefulness of accompanying former prisoners throughout the process of getting jobs. She said former prisoners appreciate the presence of a social worker when they begin their new life in a workshop, a cooperative, or in any another job.

In a special intervention Deibis Garcia, provincial director of Labor, said that follow up is just as important as identifying and taking care of unemployed youths. If after the young person is studying or working, he doesn’t continue and gives up, then that defeat will be charged to our account.