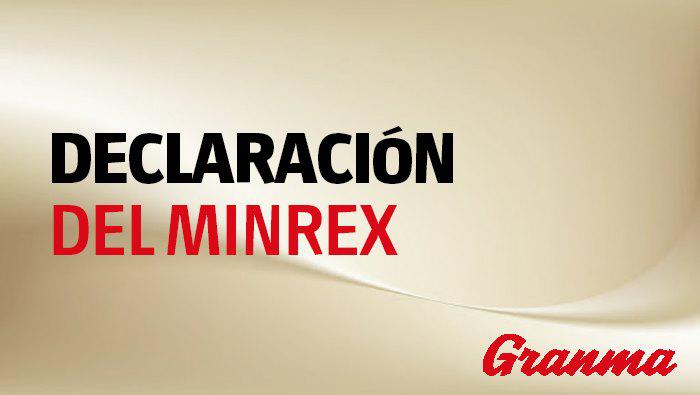 A summit as unreal as the “democracy” it defends

Declaration by the Ministry of Foreign Affairs

The virtual summit convened by the U.S. government on December 9-10, with pre-recorded speeches of the invited guests and a totally manipulated agenda, was a demagogic exercise, with no benefit for the international community and without any proposal to solve the most pressing problems of the world we share.

As a political artifice, it only served to show the growing isolation, alienation and loss of influence of the most powerful nation on the planet. In a practical sense, the only apparent result is the commitment of $400 million to the political subversion of sovereign states in blatant violation of international law.

A few hours have passed since the end of the event and few are able to explain or remember what happened there.

The U.S. government missed the opportunity to convene an inclusive meeting, promoting cooperation and the search for solutions to any of the problems that most urgently and seriously impact the lives of the majority of the world’s population.

It did not have the will to join efforts to face hunger, malnutrition, poverty and growing inequalities, unhealthy conditions, migratory problems, drug trafficking, organized and cross-border crime, the arms race or climate change. It did not even conceive the idea of convening world leaders to discuss and articulate a concerted response to the COVID-19 pandemic and other communicable diseases. The fact is that the United States cannot provide solutions as long as its policies are an essential part of such serious problems.

With great demagogy, IT called the unreal meeting under the theme of “democracy”, which it assumed as the defense of capitalism and applicable only to governments that do not challenge the hegemonic authority of the United States. Such a fabrication clearly shows the true divisive purpose and the interest in diverting world attention from the serious problems facing U.S. society and the U.S. political system today.

A country where money outweighs the popular will of its citizens, where the free sale and irresponsible use of lethal weapons, intervention and interference in the internal affairs of sovereign states is promoted, where racism is systemic and war is the most lucrative business, has nothing to teach the international community.

As Cuba has been warning, the U.S. government is leading a dangerous campaign aimed at creating an international schism, dividing the planet and punishing countries that defend progressive projects or do not accept the models imposed by the United States.

To try to impose a single acceptable recipe for a political system on all countries is, in itself, profoundly anti-democratic. It is contrary to the Proclamation of Latin America and the Caribbean as a Zone of Peace, signed in Havana by all the countries of our region, which establishes the commitment to fully respect the inalienable right of every State to choose its political, economic, social and cultural system, as an essential condition to ensure peaceful coexistence among nations.

This twisted vision is what leads them to act on the margins of the United Nations, where they suffer increasing isolation due to their repeated challenges to the principles of civilized coexistence, respect for multilateralism and the self-determination of peoples and sovereign equality among its Member States, concepts that today are unacceptable to the U.S. rulers.

More than 80 countries, including Cuba, were not invited, and this is not surprising, because we are a nation that for almost 63 years has successfully rejected the U.S. attempt to subjugate it and has effectively defended its inalienable right to self-determination. In a summit aimed at promoting capitalism, and the central and dominant role of the United States in its promotion, the presence of socialist Cuba should not be expected.

In the cooperation to find solutions to the serious problems of the world, the international community can always count on our support, on the constructive, active and supportive contribution of Cubans in the search for consensus, to unite wills, to enrich and benefit from diversity and to privilege what unites us instead of what separates us. The international trajectory of the last 60 years supports this affirmation.

The world demands peace, development, justice, solidarity, cooperation and mutual trust. It does not benefit from division, selectivity and unilateral impositions.