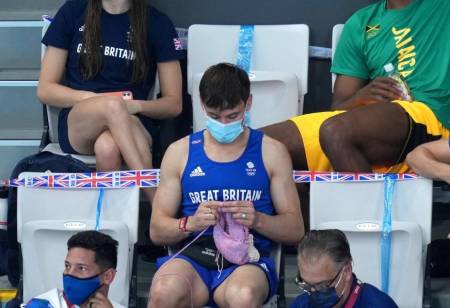 New generations are born with a willingness to excel admirably, and it is good that the fire of Olympus burns, without discriminating, in all hearts

Tom Daley, now Olympic diving champion, knits to raise funds to help gay boys who have no support from their families. Author: Taken from the Internet Published: 03/08/2021 | 06:59 pm

Wanting to be someone else is a waste of the person you are.
–Marilyn Monroe

If there’s one thing that distinguishes Olympic competitions, it’s their exhibitionist nature. More than to beat their rivals, whatever the sport, each athlete goes out to demonstrate how far we can go in life when we set out to break the limits that someone else set before and seemed immovable.

In that spirit, records are also broken from the stands, as evidenced by the photo of British diver Tom Daley, the new Olympic champion, kintting in concentration as his teammates compete in the Aquatics Center.

Daley declared, “I am gay and an Olympic champion,” to show that these are not incompatible qualities, as has been taboo for too long in modern sport. And the knitting thing is not just a hobby: his fame and activism on Instagram allows him to sell those pieces and donate resources to shelters for gay boys with no family of their own to give them love and respect. The gold didn’t go to his head because he already had it in his heart.

This is his third Olympics and the second time he has come openly gay, an attitude that inspires more athletes to shed the fear of showing who they are in front of the world’s cameras. One less element of stress for their competing bodies and their minds, pending also pandemic.

“When I was younger I always felt like the one who was alone and different and didn’t fit in. There was something in me that was never going to be as good as society wanted me to be,” he told the Guardian. “I hope that any young LGBT person can see that no matter how alone you feel now. You are not alone. You can achieve anything.”

Tokyo 2020 is not the first step, but it is the most forceful in bringing sport out of the closet of sexual prejudice. The sports magazine Outsports states that in the London 2012 Games, 23 self-declared athletes participated outside the heteronormative canons; and in Rio 2016 there were 56.

The Japanese event almost triples the number with athletes from 25 countries. To mention the most significant: from the United States there are 30 and from the United Kingdom 15. There are 12 from the Netherlands and 11 from Canada. New Zealand and Australia had nine each, and Brazil seven. And these figures do not include the technical staff and Paralympic athletes who will come later.

And if we are talking about challenging stereotypes, one who does so in a forceful way is New Zealand’s Laurel Hubbard, 43, the first trans woman to compete in weightlifting. Registered as a male at birth, in 2013 she completed her physical and legal transition process. Her case has raised strong controversy, but her hormone levels meet the international requirements to compete with women in this sport, which is controversial for gender reasons.

Hubbard did not win a medal, but she was still happy to be in competition, and before the press she thanked the International Olympic Committee for reaffirming its commitment to the principles of Olympianism and making it clear “that sports is something for everyone, that it is inclusive and accessible”.

For now, trans people who take up sports competitively face complaints from those who believe that genes, bone weight or pubertal development give them certain biological advantages, especially if they compete with women. The curious thing is that many of these sportswomen or their predecessors faced similar resistance to breakthrough in sports that were considered very masculine, and proved that they could give an equally honorable and exciting show for the public, something that could also be said of Paralympic competitions.

As we have already said: if in any area society quickly applauds those who leave behind obsolete marks, it is in sports. The new generations are born with the physical and mental disposition to excel in an admirable way, and it is good that the fire of Olympus burns, without discrimination, in all hearts.