When Violence is Defined with Symbols 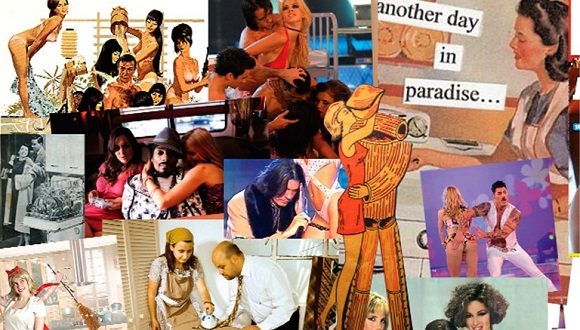 When Violence Against Women is Defined with Symbols

By Ania Terrero
Cubadebate journalist. Graduated in 2018 from the Faculty of Communication of the University of Havana.
On Twitter @AniaTerrero
July 16, 2020

Media that accuse, simplify or ignore victims of gender-based violence; others that silence inequalities. Soap operas that show women concerned about their relationships, motherhood and only later, sometimes for professional fulfillment. Video clips with abundant shots of almost naked dancers, offering their charms to the artist in charge. Advertisements where, while they cook, wash and dream of ideal household appliances, they drive luxury cars and manage life beyond the home.

The list is long: sexist stereotypes are repeated ad nauseam in the media and cultural industries. Over and over again, patriarchal principles are naturalized [socially “acceptable”] according to which women should be beautiful, sensual and delicate, take care of household chores and children, fulfill the sexual desires of their partners and belong to men. They perpetuate, in short, other forms of abuse, although this time in a symbolic way.

In the words of the French theorist Pierre Bourdieu, symbolic violence refers to a group of meanings imposed as valid and legitimate by the patriarchal culture, which are based on male supremacy and domination and, therefore, have a close relationship with power and authority. But the conflict is more complex and has many forms.

As explained by the journalist, professor and expert in gender issues Isabel Moya, in her article From Silence to Media Show, this phenomenon implies “the reproduction in the mass media, and in general, in the cultural industries of a sexist, patriarchal, misogynist discourse that relies on prejudices and stereotypes to present reality and social processes in all areas: the productive and reproductive, the public and the private, the basis of the economic structure and the socio-cultural superstructure”.

In other words, a kind of vicious circle is produced in which the makers of these discourses validate and transmit myths and macho images which, in turn, they inherited from previous generations. By the work and grace of the latent patriarchy, stereotypes persist and are amplified as informative, audiovisual and entertainment alternatives grow.

This happens, moreover, in a world where a relatively small group of transnational companies dominate the information and entertainment market. Conglomerates such as AOL-Time Warner, Disney, Sony, News Corporation, Viacom and Bertelsmann dictate the what and the how. They decide what global audiences will see, hear and enjoy. In short, a few decide for many and influence them.

The greatest danger lies in the fact that, directly or indirectly, they tend to naturalize a gender-biased construction and a subordination scheme where women play at a disadvantage. As a result, it contributes to reproducing the causes of male violence against women and girls.

“The media establish, through their discourses, an axis of cultural matrices, where the hegemonic power is made explicit and reproduced. They constitute one of the mechanisms of reproduction of the patriarchy on the level of subjectivity,” Moya said.

In relation to the above, symbolic male violence must be analyzed in a broader context. As the journalist specializing in gender issues, Lirians Gordillo, explained to Cubadebate, feminism and gender theory had the clarity to demonstrate the interconnection between different forms of discrimination. “The relationship between patriarchy, capitalism and racism, among others, as systems of oppression, allows them to be sustained and updated,” she said.

Therefore, symbolic macho violence is accentuated and acquires particular nuances when other categories such as skin color, place of residence, sexual orientation and gender diversity are involved. It is vital to recognize these forms because they allow us to identify zones of silence where it grows and intensifies.

Abuses that are hidden from view

The first step in dismantling symbolic male violence is to learn to identify it, but this is rarely easy. It often takes more subtle forms than physical, economic, sexual and even psychological. Moreover, it happens in a world of cultures and words where norms are not always clear, where almost everything is considered valid and where, therefore, feminist demands are often assumed to be excesses or exaggerations.

This phenomenon goes beyond perhaps obvious manifestations, such as the objectification of the female body and the re-victimization of those who suffer gender-based violence. Many times, it begins in apparently simple expressions such as silence or absence. The fact that many of the inequities and discriminations that women face today do not usually appear in the media and in entertainment products is a form of abuse.

In the opinion of Lirians Gordillo, because of the fact that what is not named does not exist, removing women with diverse identities from the public stage means not seeing them as people with rights.

“In the Cuban case, we are not talking about women in an abstract concept, but about those who are marked by other features such as skin color, age, gender identity, sexual orientation or the presence of a disability. Perhaps the most absent are transsexual women, lesbian women and black women,” she said.

Addressing gender conflicts from a lack of knowledge, reproducing the stereotypes that make them possible, is as serious, if not more so. According to Isabel Moya, these issues have gone from being “what is not talked about” to being illuminated by the spotlight.

However, she explained, “the lights only illuminate some issues: violence against women, abortion, marriage between homosexuals or lesbians… But more than true light, what prevails, with its honorable exceptions, is the banal approach, the morbidness, the sensationalism that becomes yellowish in some cases. Commonplaces that support myths and stereotypes are repeated ad nauseam”.

And there goes another form of symbolic violence that is almost never evident. Sexism, prejudices and macho representations dominate a good part of the informative and leisure production in the world where we move. They validate a model where women, in more or less obvious ways, are subordinated to men, depend on them or, when they try to make a difference, are excluded. These problems do not only affect them, but also all those who break with the moulds of an essentially conservative society.

Video clips and songs that depict women as objects of desire, films that sell stories where violent men fall in love with nice girls and these girls do their best to save them from themselves, advertising that outlines the roles assigned to each sex and promotes an unattainable ideal of beauty, comedy shows that ridicule homosexual relationships, sensationalist headlines and the stereotypical treatment of gender violence that gains space in the media are just some examples of this phenomenon.

Moya mentions others: “Symbolic violence is exercised when women of the South are treated with folkloristic or xenophobic approaches; when love between women is blamed; when so-called ‘women’s issues’ are confined only to certain sections of newspapers or newsreels; when the lyrics of a song cry out to the four winds to ‘punish’ it; when the protagonist of a series for teenagers only lives for her ‘perfect physique’ and we see her multiplied in dolls, T-shirts and disposable cups”.

The persistence of a sexist language, which privileges the use of the masculine as a universal generic, evidences other forms of macho abuse in the symbolic realm, said Gordillo. This goes beyond written or oral expression and is manifested in other ways in audiovisual products. “We have to analyze what the conflicts of women and men are in series and films, in what roles they appear, and what relationships they establish between themselves,” he added.

Cuba, realities and challenges of a latent violence

Although the work of training and education on gender issues among journalists, communicators, artists and creators has already begun to bear fruit, Cuba does not escape the examples and consequences of symbolic violence.

According to Lirians Gordillo, in audiovisual production, with a few exceptions, a patriarchal representation of women persists. The usual conflicts and interests for them are still the traditional ones: family, couple relationships, aging. Even when they have an active public and professional life, the problems associated with it are subordinated to the previous ones.

As Cuban researchers have pointed out, the public arena is one of the main spaces of progress for Cuban women. “They tend to have greater participation and representation in decision-making in different spheres, but patriarchal relations still prevail within the domestic sphere. It is very curious how this reality is represented in fiction, soap operas and other products,” said the journalist.

At the same time, research on the Cuban press has detected challenges and obstacles that still limit the treatment of issues related to macho violence, human trafficking, feminist struggles, inclusive language and good ways of doing gender journalism.

The last ten years have made some differences if we are talking about symbolic violence. For Gordillo, if one analyzes the informative and entertainment production in that period, one finds more professionals within the communication interested in breaking with macho stereotypes and more communicative products that assume diversity.

This shows the possibilities of a real change and its consequences. However, he said, the majority of products continue to reproduce symbolic violence, even, sometimes, with the intention of being inclusive and not reproducing stereotypes.

According to the journalist, good intentions are not enough because the way we look, the visual codes, the construction and representation of that reality have been formed and educated from the patriarchy. “We have to unlearn many stereotypes, many representations and many macho codes. That needs knowledge, it takes a process of questioning, of getting out of comfort zones above all,” she said.

In this way, filmmakers, artists and communication professionals must combine personal preparation with the use of advisors and specialists when building works and products that approach these issues. Even in those who do not touch on gender conflicts directly, prior training is necessary because these issues usually cut across any representation of society. Alliances between academia, research, communications and artistic creation are vital.

Diversity and systematization of communication products that address male violence is another key point. “Due to its complexity, this problem cannot be analyzed in a single communicative product, once a year or in a specialized media. It is a conflict that needs to be discussed, represented and deconstructed in a systematic and diverse way,” said Gordillo.

Male violence and its expression in the symbolic realm is an urgent challenge. It limits and threatens women’s lives and their rights, but it also affects the development of the nation. Therefore, the best possible response will be one that combines social, political, legal, educational and health efforts, among others, and is articulated as a comprehensive policy. In short, the country we want to be is also at stake.