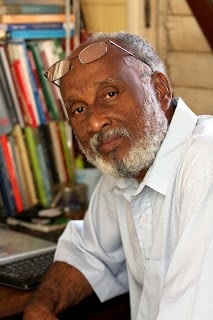 I believe that what is happening there is a consequence of not having taken care of four fundamental issues in time:

1- The marginal conditions of some of our neighborhoods in Havana.

2-The lack of attention or delay in recognizing and using the Social Sciences.

3- In spite of Fidel’s early warning, having neglected, for a long time, the racial question.

4-Some deficiencies in our political-ideological work.

On the last three points, I have warned enough.

But as a result of my warnings, I was never called to the Round Table, and when the faces of its protagonists appear, mine is never there. In spite of having been, individually, among those who have attended the Round Table the most.

None of those who used to publish me now publish me. They have not called me anymore to Cuban Television. Luckily TELESUR gave me a job.

I have also written many works on the racial question, three books and dozens of articles, always warning about the role that the Social Sciences should play and about the importance of ideological work. I am sure you have read some of them. In them, I have had to fight many battles, so that they do not accuse me of being a racist, accept my criticisms as necessary and do not believe that because I have traveled a lot to the United States, I have brought these things from there. Of which I have been accused more than a few times. Racism and discrimination were not brought by anyone, from anywhere. They are here, because they were born, with us, as a nation. And from here we will eliminate them someday. For the glory of all Cubans. We are already working on it within a Governmental Commission, presided over by Miguel Diaz Canel, President of the Republic.

We have slums, which I know very well, because I have visited them, so that no one can tell me about them. And, in addition, because when I had to come from my town, to Havana, in October 1958, I lived, beyond the triumph of the Revolution, in the Jesus Maria neighborhood, in Vives Street No. 258 between Alambique and San Nicolas. I know the neighborhood very well, because I participated in the La Coubre, joined the Young Rebels there and worked in the Provincial Directorate of 26th of July, which was on Arroyo and 27th.

In those neighborhoods, the standard of living is very low, it always was. They are plagued by delinquents, prostitutes, and poor people, who live on the day-to-day things they can get. It does not mean that all their neighbors are prostitutes, antisocial and delinquents.

Many decent and revolutionary people also live there. But this is the environment that has always tended to dominate. In general, social relations, forms of behavior and mentality are still far removed from what is reflected in our journalistic, radio and television media. The state of the houses, the streets, the material conditions, do not contribute to generating a healthy social environment. As a result, many families struggle to move to other neighborhoods and the worst remains in the neighborhood.

Thus, attitudes, forms of behavior, colloquial language, philosophy of life are generated, all of which are very different from the environment in which most of us live and develop.

In general, there are no reading habits, interest in studying is very low, the sense of intellectual and cultural improvement is also very low. Access to the University is very limited.

Most of them are interested in earning money, or rather in having it, even if they do not seek it by lawful and moral means. Therefore, whoever offers them money, buys not a few, with relative ease, even if it is to carry out antisocial activities, and sometimes even counterrevolutionary activities.

Excessive drinking is very common among the type of person who live in this neighborhood. Rather, not a few of them are interested in partying and getting drunk. As a result, the vast majority of them, within the environment in which they live, are not interested in standing out for the positive, but for the negative, which not a few exacerbate. In their dress, their speech, their behavior, the way they behave socially, the way they treat women.

So then, the people, let’s call them normal, who live there, suffer a kind of cornering. That forces them to move away, so as not to suffer the negative consequences of being forced to live under such conditions.

The environment in which they live, tends to generate an ethic of permissibility, before any crime. A similar type of behavior is the treatment that women generally receive. Women often react in the same way, with a tendency to associate with these types of men, who some consider more “macho”. Generally, this type of woman, when receiving from the man any cultured attention, respectful treatment or delicacy, confuse them with homosexuality, as a lazy and effeminate type. This serves to fuel rude and disrespectful behavior, with a tendency to brutality towards them. Without realizing, sometimes, that they themselves contribute to the worse treatment they are subjected to. So then, feminism, the struggle for equality and recognition of women’s status, does not have much space among many of them.

They despise the laws, those who apply them, the police, in particular, they hate them and do not deserve any respect. They see them as their enemies and never as agents of order or guardians of good morals. For this reason, the tendency is not to inform on anyone, regardless of the crime they may have committed. This is considered as an act of “snitching”, lack of manhood, which many consider should be punished, even with a beating or death. Revenge is a typical phenomenon of social behavior.

They were not born this way, but, not infrequently, the example they receive at home, is forming them in this way; because, not infrequently, the same parents, inoculate them with customs, forms of behavior, values, ethics, inverse to those that the average of the society demands of them. From here also, sometimes, developed their behavior regarding education, respect to teachers, authority and government institutions.

In their eyes, the ideological work that is done is looked down upon, the work of the UJC seems to them as elitist and that of the rest of the organizations do not manage to attract them to good manners.

Fidel was very concerned about this, when he spoke several times about the racial question and generated the “Social Workers”, in view of the reality of the number of young people who neither studied nor worked. It was said that there were about 80,000 in the province of Havana. I also oriented to make investigations to know what was happening with the children in these neighborhoods. If the mothers had enough money to buy food for them, if the children had a television set and toys, etc. Trying to alleviate a social situation that could already be considered critical.

But all this remained in Fidel’s good intentions and the work that was being done was not continued. We were coming from a situation in which prostitution, drugs and these social problems were not considered to have a place in our society. But Fidel perceived them clearly from the beginning and oriented work toward them.

Today then, these neighborhoods are affected by delinquency, drugs, people without ideology, the unclassed, the marginalized, to whom we have already arrived too late. The consequences are manifesting themselves.

In these neighborhoods, in general, the revolution has not been able to reproduce itself and the counterrevolution, which has always stalked them, does not find it very difficult to attract them. If we add to this, the Pandemic and the difficult economic conditions we are going through today, I would say that we are in the most complex situation to address their problems. Although I am sure we are going to do it. Because our social policy and the interest that “no one is left helpless” are real. And they are being reinforced within the current economic policy.

They would not have been counterrevolutionaries, in their immense majority, but we, with our inattention and deficient political-ideological work, have been giving them away to the counterrevolution. Perhaps, without realizing it. So, if the revolution had managed to work more strongly against inequalities, the racial question, marginality, invisibilization; if our television and our media in general, had always been more visible of the differences, had debated more our problems, of things about which we are only beginning to talk about now, it would have been less difficult to fight against that environment and rescue its victims from the problems that now afflict them. And that the counterrevolution takes advantage of.

But we concentrate on the advances, neglecting the fact that not all of us have arrived in the same way to the current Cuban society and those have been left behind. Being the majority, blacks and mestizos, unfortunately, poor in general. They are the ones who were more directly affected by the “starting points”, farther away from the social and cultural welfare that the revolution, from the beginning, has lavished on many.

San Isidro is not the only neighborhood in Havana with these inequalities, marginalities and social disadvantages that have degenerated into the counterrevolutionary attitudes of a few.

There are other neighborhoods. And not only in the Capital.

What should we do now?

I believe that we should pay attention, with urgency, to the following issues:

1- We must pay attention to the material needs of those neighborhoods, in order to improve them. No promises, no propaganda. Just start. To make people see that their material situation begins to improve.

2- It is necessary to work on those neighborhoods with quality ideological and cultural work. Not with speeches or talks. Nor with master classes.

3- The situation of all those neighborhoods, Cuasi cuaba, La Lisa, Siboney, Atares, Luyano, etc., must be reviewed. If they have not turned around, it is because there are community projects and positive neighborhood leadership.

4- It is necessary to dust off everything that the Social Sciences have investigated and put it into execution. Formulate new projects and finish giving the Social Sciences the place they deserve, within the general scientific work and in the treatment of problems, in particular. There is scientific potential to do so.

5- The party must thoroughly review the work of the Ideological Apparatus and turn part of the tasks of its cadres in the directions that this situation demands.

6- The neighborhood of San Isidro, it is necessary to negotiate with them. See what they want. Take them to the logic of what they can ask for. And try to convince them of what cannot be given to them.

7- Formulate a strategy to help the nuclei of the party in situations of this nature. Because I am convinced that this struggle continues. And the insurmountable ones, already on the side of the counterrevolution, will continue, as long as they can, taking advantage of the complex situation the country is going through, to fulfill their purposes linked to the current US policy towards Cuba.

Biden already gave them the human rights policy, in his recent report, with which they will continue to pressure and perhaps do nothing to help the country solve its difficulties. On the contrary, they will try to exacerbate them. Generating a waiting period to see how the story ends.