Nasobuco: The One Who Came to Stay

Nasobuco: The One Who Came to Stay

To be honest, I thought, at first, that the word nasobuco was an Asian voice like Kawasaki or Tamagochi. Since it was the genesis of the pandemic in that region, the word could well spread along with the new coronavirus. However, in recent readings of specialized articles, I could confirm that it is not so, even some scholars consider that Cuba is one of the few countries in America, where this garment or tool that protects the nose and mouth from the exit and entrance of microbes and bacteria is called this.

The most experienced ones grant the Cuban people this linguistic license because of its deep relationship with the medical and scientific community, which is where this neologism is really used more, referring to the nasal and mouth region (nose and mouth) belonging to the respiratory system.

For other countries, it is less complicated and they simply call it tapaboca, cubreboca, mascara, or barbijo… The important thing in all cases is to keep it well on and not to use it as a hat, mask, cubrementón or “tapa güergüero”, as my grandmother would call it when it is worn around the neck as if it were a bandage covering a tracheotomy.

The truth is that the nasobuco (or whatever you want to call it) has come to stay for an indeterminate period of time and with great possibilities that it will be a garment that we will carry in our wallet or pocket like we carry a handkerchief, keys or wallet.

It is already part of our attire and although many times we forget it when we leave the house and have to return to look for it, it is a component that has taken on vital (and read well: vital) importance.

Like everything new in clothing, the nasobuco does not escape fashion. Its confection already reaches personalization edges. The same is combined with the colors of clothes, shoes, cap, headscarf, necklaces, bracelets… When its color does not play with any of the above-mentioned it is that it is combined with the panties, brassiere’s or panties that we carry. In this case, it is not advisable to find out too much.

The designs and materials used are different. Those more spiritual, artistic and sensitive, make drawings, embroider flowers, embed a sticker of your company, favorite sports club or the name of your loved one. It should not be misunderstood in case you have two names embodied. It can be your wife and daughter or son, father and brother… in short, if not, it is not your business either: each one puts in their nasobuco what they want! I said whatever you like, not wherever you like; we talked about that and I hope it was clear, even though I said it with the nasobuco on. 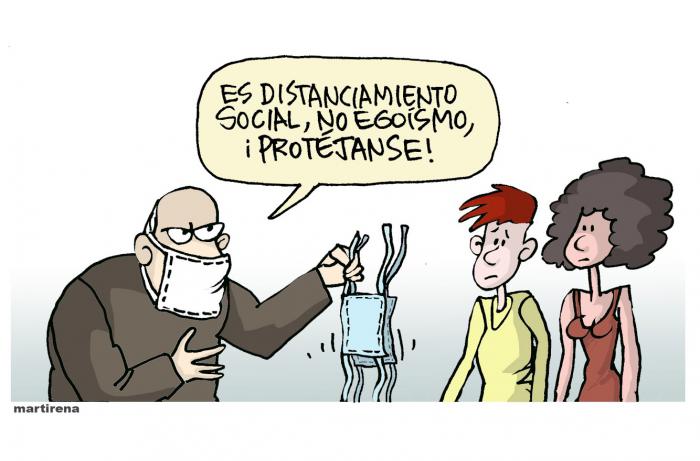 This coronavirus that goes around the world, brings us some lessons and challenges. There are ancient truths that sometimes remain hidden in the agility of the days. These are some of them: sickness can knock at the door of the prince or the beggar; man’s life is fragile, and we all have, as an increasingly connected species, a common destiny. That, in a way, reminds us of César Pavesse’s dramatic verse: “Death has a look for everyone”.

Overwhelming were the images of empty cities in the midst of quarantine. It seemed as if a flutist had taken away the inhabitants of a town, or that we were leaning out of a window that let us see clip from one those science fiction images in dystopian and apocalyptic societies.

There are countries where human health is just another commodity; where a test to determine whether someone is a carrier of the virus could cost $3,000. Is that true? And how do those who have no health insurance manage? COVID-19 lays bare the structural flaws of social systems, where people are the screws of the great machinery that produces millions of dollars for a few, and poverty for many.

Now the virus is also an examination of ethics; selfishness makes its trenches, lies and morbidity run through the social networks exacerbating panic and uncertainty, and solidarity is a bit of fire that survives the drizzle.

How beautiful was the scene of the Italians singing as a chorus from their balconies! It is as if they were contaminated by the virus of collective happiness, of laughter, or that mystery of love that cannot be defeated in the best of peole.

That’s why Evangelina, in Havana, took three of her sheets and turned them into nasobucos for anyone who needs them, no matter who is a stranger. And a ship, where there were people carrying the virus, was given permission, despite the risks, to enter a Cuban port for humanity, and then sent them all home by plane.

Perhaps for Cubans, the biggest problem has been how to avoid hugs, effusive greetings, that habit of affection that identifies us as much as an identity card. It’s just is that we are used to rolling over in a conga, even after that cyclone that blows us away; to throwing the domino on the table to sing a capicua; to dance casino or to argue about a ball in a corner.

Today we still need that distance that this terrible disease forced us into. In spite of the phases that put the country on the road to a new normality, it is still necessary to delay the overdose of affection; to continue the truce by talking to us so closely; to extend the rest to the squeezes of euphoria. We still need to greet each other with closed fists, with forearms, with that gesture, which is not ours, of bowing like someone going to a judo match, or retiring from the tatami.

Let’s give ourselves one more time. Everything has its time. We are winning, but let’s not be in a hurry to go back to the burden of divided hugs, to that mania of walking mixed up in the noise and the affections. Let responsibility and patience dominate our actions, so that the unwanted return of the virus, in the form of carelessness, does not destroy love, optimism or desire.

Let us keep an open book so that, later on, we can fill it with hands that squeeze, in this Island where joy lives on guard.