The Socialist Imperative; From Gotha to Now (2015) 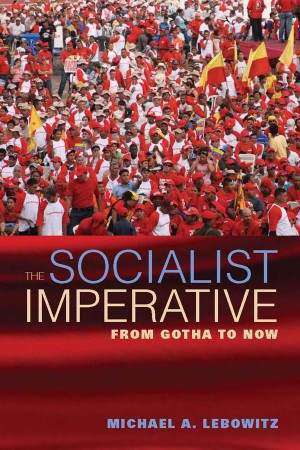 THE SOCIALIST IMPERATIVE; FROM GOTHA TO NOW (2015)
by Michael A. Lebowitz [excerpts] Monthly Review Press (2015)

At the February 2010 Havana Book Fair, I presented my short book, El Socialismo no Cae del Cielo: Un Neuvo Comienzo, which had been published in 2009 by Ciencias Sociales (Cuba) and earlier in 2007 by Monte Avila (Venezuela). The book contained sections from Build It Now; Socialism for the 21st Century (in particular, “Socialism doesn’t fall from the sky,” well-known in Venezuela because of Chcivez’s many references to it on television and available in several free editions), and this was supplemented for Monte Avila with a new beginning, “New Wings for Socialism” from Monthly Review (April 2007). The talk provided an opportunity to introduce Cubans explicitly to the concept of “the elementary triangle of socialism,” the goal developed in “New Wings” but not named in the new book. It also was an occasion to talk about difficulties and obstacles along the path to the goal—obstacles such as those faced by Cuba then and now. Without mentioning Cuba at all, I spoke about what I had observed in Vietnam a few months earlier, and I am certain that the Cubans present understood my cautionary tale. Discovering a new path without getting lost is always challenging, and I hope that the publication by Ciencias Sociales in 2015 of the Socialists Alternative. Real Human Development, in which the argument of the socialists triangle is fully developed, will be useful.

pp. 150-151
A more recent example of the concept of democracy as consultative participation was cthe extensive discussion in Cuba over the “lineamientos,” the guidelines for the party that were circulated by the party. These were the guidelines that have set Cuba on its current path to “update” the model. Everyone was mobilized for discussions—in workplaces, neighborhoods, everywhere. The party coordinated these discussions in each separate location, and, on the basis of reports, made adjustments. For example, the great concern expressed in many meetings about the phasing out of the libreta (the set of subsidized necessities) and the release of large numbers of people from state employment led to a slowing down (although, it must be noted, not the reversal) of these decisions.

Subsequently in Cuba there were discussions of a new labor code. Here again there was extensive discussion of the document initiated by the party. As in the case of the discussions of the guidelines, this participation plays an important role in transmitting concerns from below, while at the same time educating those below as to the proposal. However, these discussions are constrained. For example, in the case of the labor code, there was no place for a general discussion of worker management. Further, there was no means for communicating from one workplace to another; rather, collective atomization characterized the process.

All of this is logical from the perspective of the conductor: he is the one who knows the score. He alone knows the whole and, therefore, activity outside this framework is to be discouraged. Further, the logic of the conductor is such that there can be only one conductor; it is, after all, essential that there be unity at the top because in its absence this would confuse the players.

There is absolutely no doubt that extensive discussions, for example, in Cuba, distinguish that society from many others. However, participation in this case is not the same as the opportunity to develop capacities through protagonistic democracy. What kinds of people are produced in this relation? Not what Marx called rich human beings. Not people who have transformed themselves through their activity and are confident in their own powers. As the Soviet Union, China, and other countries characteristic of the “real socialism” of the twentieth century demonstrated, such relations do not build the protagonistic subjects who have the strength to prevent the restoration of capitalism. The people produced within this relation are people without power.