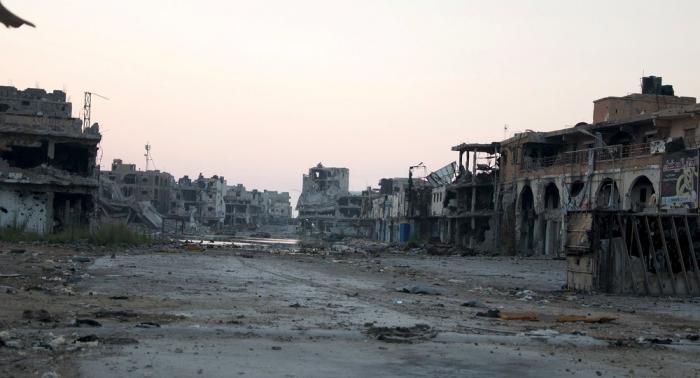 In 2011, the Middle East underwent a reconfiguration of its political map through protests stimulated from outside, and interventions disguised as aid. This series of events went down in history as the “Arab Spring”.  However, the similarity with the word that refers to one of the most festive seasons of the year is only in nomenclature, as this geographical region has since been plagued by continuous internal crises, resulting in a climate of permanent instability.

In this situation lives Libya, a nation that for four decades had traveled paths of stability and progress under the hand of President Muammar Gaddafi, a leader who promoted social and economic development in this North African country.

What happened? An accurate formula of manipulation, lies and “humanitarian intervention” designed by the US government and supported by the European Union (EU) was applied against Libya, which sounds suspiciously familiar to the situation facing the Venezuelan people today.

The opposition forces were armed to fight Libya’s army, a conflict was constructed in the media that, it is known, had as real scenario of development film and television studios, hired extras, stuffing extras, where battles, massacres, bombardments were filmed, in the best style of Hollywood cinema. Through this, they manufactured the necessary pretext that “justified” the intervention of the US-NATO duo, under the pretext of “preserving human lives”.

Invented bloggers emerged, supposedly writing from Tripoli about events in real time, but months after the end of the staging it became known that the vast majority of that “citizen journalism” was made thousands of miles away from Libyan land, from comfortable offices in London, New York or Berlin.

In order to sow chaos, the international mass media carried out a “mythification” of the Libyan president, spreading the story that he was governing through blackmail and humiliation.

This false image, paved with fake news about the execution of civilians in the confrontation between the army of Gaddafi and the militias, was amplified by the large newspapers and right-wing publications, which gave them greater validation.

All these lies responded to the simple reason that in this country there are the largest reserves of light oil in Africa and the Western oil companies wanted to take them. Also, months before, Gaddafi had urged African and Muslim countries to adopt a single currency: the gold dinar. In that way, the dollar would have been excluded, threatening the empire’s currencies.

But the truth had nothing to do with this story. The media montage combined with the actions of the US and NATO bombings not only ended the life of the Libyan leader, but also turned that nation into the failed state that it still is today.

Libya was an Italian colony until the Second World War when, by agreement of powers such as Britain and France, and the United Nations, it was administered by both countries. The British ruled the destinies of the regions of Cyrenaica and Tripolitania, and the French occupied the area of El Pezzan, until 1951 when the nation achieved its independence.

However, until 1969, when Gaddafi overthrew the monarchy of King Idris, the people of that country lived in difficult conditions. They had low rates of development, as exemplified by an article entitled “Libya according to the UN and the harsh reality,” by Thierry Meyssan, a French journalist and political activist, which states, among other elements, that only 250,000 inhabitants of the 4 million total knew how to read and write.

With independence and the subsequent construction of a state characterized by social achievements, Libya reached one of the highest indices of human development and the highest nominal per capita GDP in Africa.

Several sources say that Gaddafi led his country to set an example for Africa and the Arab world by unifying the nation and creating institutions and ministries to strengthen institutionality.

The movement promoted by Gaddafi was known as “The Green Revolution”.Among its achievements were the beginning of an agrarian reform, the impulse of a social security system, putting health within the reach of all and that the profits of resources such as oil, could be really exploited by the people.

In order to achieve this objective, the Libyan government nationalized the so-called black gold industry, taking those large incomes to subsidize minimum human rights such as access to drinking water or education, which before were considered true luxuries.

The Libyan leader allowed peasants who wanted to till their own land to do so and the state helped them to do so. It also promoted housing as a right for all as well as access to electricity.

According to Telesur, loans of any kind had a zero percent interest rate and the Central Bank of Libya was a sovereign institution at the service of citizens.

Gaddafi worked for the cooperation of African countries through the African Union (AU), founded in May 2001, with the aim of finding a way to empower these countries without the intervention of Western powers.

El País, a well-known Spanish newspaper, included in many articles the vision of a Gaddafi obsessed with power and sex. However, in 2016, five years after his physical disappearance, they had to accept and publish that Libya was living a real nightmare, where the people were the least.

An example of this is political instability. Today, Libya has up to three governments, two in the capital, competing for leadership in the west of the country, and another in Tobruk, which dominates the eastern regions and controls the main oil resources.

On the other hand, Usef Shakir, an expert on the subject, comments for Sputnik that “Libya used to be secure and stable: the state worked well, the country was developing. Years later the country is in chaos and terror. Some of its cities are still under the control of armed groups. We can deduce that Libya has degenerated from a sovereign country to a mixture of fragmented groupings.

It should be noted that since 2011 more than 5,000 people have lost their lives and almost one million have fled their homes because of fear and insecurity. Also, crude oil exports have fallen by 90% and the losses of its GDP are accounted for around 200 billion euros over the last eight years, according to figures collected by Middle East Monitor.

Women’s rights, respected during the former president’s government, are outraged without the slightest remorse. According to Amnesty International’s official website, “the ongoing conflict is particularly damaging to women, disproportionately affecting their right to freedom of movement and to participate in political and public life”.

Libya is a very clear example of what US military intervention has left the world: chaos, political instability, appropriation of resources by Western transnationals and an “oasis” where terrorist groups, local militias and others converge, in addition to being an example of human trafficking and extortion to those who arrive there in search of a quick way to Europe through the Mediterranean.

In January 2011 several Middle Eastern countries were shaken by revolts, uprisings, protests and covert interventions that resulted in a reconfiguration of the map of the region. These events were referred to by the West as the “Arab Spring”.

It began with the so-called Tunisian revolution, whose starting date is usually counted from the immolation of Mohamed Bouazizi, a 26-year-old young man who protested against the police, on 4 January 2011.

Behind all these uprisings soon became visible the hand of Western powers, as always, with the U.S. and France, among other countries at the forefront.

An external intelligence report, quoted by French journalist and intellectual Thierry Meyssan, said that on February 4, 2011 NATO organised in Cairo a meeting to launch the “Arab Spring” in Libya and Syria. According to the report, John McCain chaired the meeting.