The kidnapping of Elián González 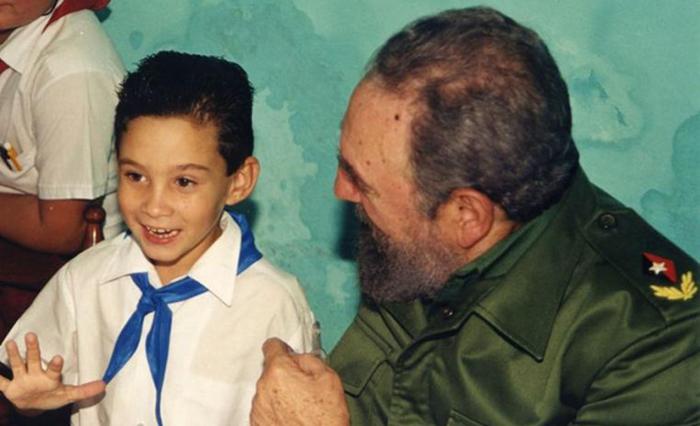 The kidnapping of Elián González and the Battle of Ideas that achieved his return.

He was returned to Cuba under the guardianship of his father seven months after his kidnapping, after the mobilization of the entire Cuban people and a long judicial process, in violation of international law and U.S. laws, since both legislations recognize that jurisdiction over these cases belongs only to the courts of the child’s country of origin.

“For Elián, the best book ever written for a child…”, this is how Fidel began the dedication of the copy of The Golden Age that he gave him, on July 14, 2000, in the first meeting they had 20 years ago, after the long battle for the return of the little boy to his homeland. Photo: Granma Archive

Twenty-one years have passed since the return to the homeland, on June 28, 2000, of that six-year-old boy kidnapped in Miami by distant relatives in collusion with the Cuban-American mafia, after losing his mother in the shipwreck of a boat that was trying to reach the U.S. coasts, as a consequence of the irregular migration encouraged by the Cuban Adjustment Act.

He was returned to Cuba under the guardianship of his father seven months after his kidnapping, after the mobilization of all the people of Cuba and a long judicial process, in violation of international law and U.S. laws themselves, since both legislations recognize that the jurisdiction over these cases belongs only to the courts of the country of origin. 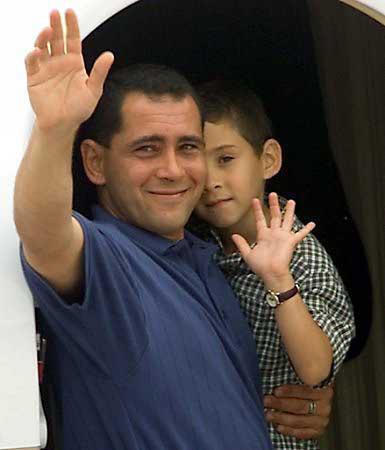 Elián González, 20 years after Cuba’s colossal battle for his return

Elián González Brotons was just a six-year-old pionero when, on November 22, 1999, his mother tried to smuggle him out of Cuba. The shipwreck of the boat in which they were traveling caused the death of 11 of the occupants except for Elián and two others. The boy, clinging to a tire, was rescued by fishermen and taken to U.S. territory, where he became, after the just demands of his father, the center of the battle of an entire people during seven months for his return.

Upon arrival in Florida, the child was placed in the care of Lázaro González, his paternal great-uncle living in Miami, who soon after, in open complicity with the anti-Cuban mafia, opposed any attempt to return him to Cuba.

Elián’s father, Juan Miguel González, was unaware of his son’s departure from Cuba and immediately requested his repatriation, an act that was supported by the Cuban Government and all its people.

In spite of the opposition of Elián’s distant relatives to his return to his country, on January 5, 2000, the Immigration and Naturalization Service (INS) of the United States recognized Juan Miguel’s parental rights over his son.

The decision was endorsed by U.S. Attorney General Janet Reno and President William Clinton, and the child was scheduled to be returned by January 14. But relatives and anti-Cuban groups in Miami appealed the decision and took the case to the U.S. courts.

On January 21, Elián’s grandmothers traveled to the United States to look for their grandson. Five days later, after multiple steps, they were able to see him, but only for a few hours, and they had to return alone to Cuba.

Faced with the silence of the U.S. authorities, on December 5, young people from the Technical Youth Brigades (BTJ) protested in front of the U.S. Interests Section in Havana (SINA), against the child’s detention.

The action was the prelude to what would later turn out to be a wave of mass demonstrations, including marches of hundreds of thousands of people -the Marches of the Combatant People-, combative Open Tribunals in different cities of the country and the beginning of the Battle of Ideas.

On December 23, 1999, in front of a group of children who guarded the U.S. Interests Section in Havana on the occasion of the march for the child Elián González, in the José Antonio Echeverría social circle, the Commander in Chief, Fidel Castro, said: “What is beginning today is the second stage of the battle of the masses that we have been waging since Sunday, December 5. It has been and is a battle of ideas, of national and international public opinion, of legal, ethical and human principles, between Cuba and the empire, which in our Homeland is supported by one of the largest and most combative mobilizations that has taken place throughout our history”.

What the SINA officials could not foresee at that time is that this would be the most prolonged and massive popular movement, of those that had taken place since January 1st, 1959, up to the present day.

Elian’s father, Juan Miguel González, traveled to Washington on April 6, but it was not until 16 days later that he was reunited with his son after a federal operation rescued the boy from the kidnappers. The maneuvers reached the Atlanta Court, which in two instances rejected demands for political asylum for Elián, but not an injunction preventing his return.

On Monday, June 26, 2000, the U.S. Supreme Court, in just two days, settled a case that had lasted more than seven months and denied all legal remedies to the abductors. On June 28, 2000, the boy and his father returned to Cuba.

“I feel happy in Cuba, that the result of that struggle led by the Cubans to which the American people and many personalities joined, led by Fidel, gave me the possibility to grow up here, to know him, to be his friend and it is my greatest pride,” Elián said on May 12, 2016.

In July 2010, Elián made public statements in which he thanked the people of Cuba and the United States for having achieved his release and supported his father Juan Miguel at all times; he also declared he did not to hold a grudge against his Miami relatives, protagonists of the kidnapping.

On December 6, 2018, the then President of the Councils of State and Ministers of Cuba, Miguel Díaz-Canel Bermúdez, congratulated Elián through his Twitter account on his 25th birthday, and recalled that the battle for his freedom, led by Fidel, showed how many challenges can be overcome together.

His hometown awarded, on December 29, 2019, the young industrial engineer Elián González the title of Illustrious Son of Cárdenas, conferred during the provincial act of Matanzas for the 61st anniversary of the Triumph of the Revolution. The title of Illustrious Son given to the already militant of the Union of Young Communists coincided with the 20th anniversary of the emergence of the Battle of Ideas.

Related information
Youth is the present and future of Cuba, says Elián González
Elián González: “Young people are not the future, they are the present”.
Special program The Battle for Elián