Cubans In The US 1

2 years ago CubaDebateCubans in the US 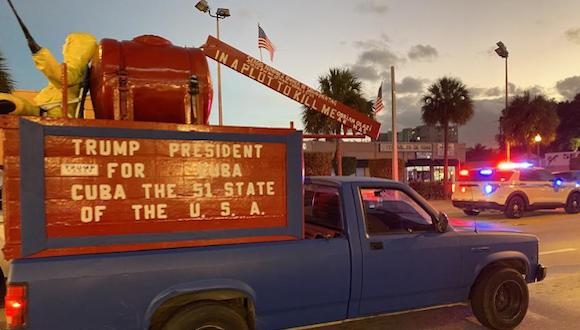 Rosa Miriam Elizalde is a Cuban journalist. First Vice President of UPEC and Vice President of FELAP. She is a Doctor in Communication Sciences and author or co-author of the books “Antes de que se me Olvidar”, “Jineteros en La Habana”, “Clic Internet” and “Chávez Nuestro”, among others. She has received the “Juan Gualberto Gómez” National Journalism Award on several occasions. Founder of Cubadebate and its Chief Editor until January 2017. She is a columnist for La Jornada, Mexico.
On twitter: @elizalderosa
November 6, 2020

In Miami, this van circulated this Thursday with a sign asking to turn Cuba into the 51st state of the USA. Photo: Twitter.

Two-thirds of Florida counties voted for Donald Trump, as did a good portion of Latin American Americans, with a record turnout in this election. In the United States, Mexicans represent by far the largest percentage of Latino voters (almost 60% of the electorate), 14% of those who come from Puerto Rico and, in third place, Cubans with 5%. Why then the overvaluation of this last group?

No one doubts that Donald Trump’s disinformation campaign worked in the émigré community from our country, but as far as the final figures on voters go, the “Cuban vote” should be taken with a grain of salt. Here are a few quick notes on the subject.

1.-There are no definitive figures for the “Cuban vote” or for any other community. Counts are underway in the country. According to the American Community Survey 2014-2018, 697,785 Cubans were registered in Florida in 2016. Of these, 367,233 declared themselves in favor of the Republican Party; 180,227 for the Democratic Party, and 150,325 other political affiliations. Finally, four years ago, 564,938 voted. Between 52 and 54% voted for Trump and between 41 and 47% for Clinton. Both NBC News and Fox News estimated a Cuban participation rate in these elections of 58%, a level similar to that of 2016.

2.-The “Cuban vote” in Miami-Dade gave a majority to the Republican candidate, as in the previous election. However, this did not prevent the election of a Democratic mayor – the first woman to hold that office in the county – despite the fact that the other candidate was a Cuban and a Republican, Steve Bovo, and more signs as he was the son of a member of the failed Brigade 2506 that invaded Cuba in 1961.

3 – This Wednesday, The New York Times acknowledged that Florida lived in a climate of unprecedented misinformation, especially in the Spanish-language media and in the local social networks. The McCarthyite hysteria reached such a level of alienation that Joseph Biden was accused of being a com munist, a socialist and even of practicing witchcraft. Nevertheless, the Democratic Party won Miami Dade County with more than a 7-point lead over his opponent.

4.-The “Cuban vote” is not a monolith. One million were born on the island and at least another million are descended from Cubans, but have lived all their lives in Florida. They all identify themselves as such in the national census. In those two groups there are American citizens and others who are not, some speak only English and others only Spanish, have registered to vote or not, are Republicans, Democrats or Independents, and have direct family in Cuba or not.

5 – Michel Bustamante, an academic from Florida International University, maintains that the Cuban community is much more complicated than it has been described in the middle of the electoral contest. He speaks of a “cognitive dissonance”, notable in the Cuban communities of Hialeah and Miami. Many send remittances to their families or travel regularly to the island, but also express support for Trump’s sanctions.

6.-The relationship with Cuba is not the main issue that defines the vote of a Cuban resident in the United States and it has not even been among the main motivations for going to vote. According to data from the Latino Decisions survey, the main concerns of Florida’s Hispanics are the pandemic (52%), employment and the economy (44%) and health care costs (28%). Other analysts have perceived that, even for those most receptive to the administration’s anti-Cuban rhetoric, the fear of the Covid was greater than the hatred for the Havana government.

7. There is no single “Cuban vote,” nor can a similar statement be made about any immigrant community in the United States, whether larger or smaller than the Cuban one. The emergence of the term and its permanence in time has to do with the state policy applied against Cuba for 60 years, which is totally different from any other articulated towards the rest of the nations of the world. Cuban emigration in the United States is a by-product of that policy.

Not for nothing did Bustamante say this Wednesday in a tweet: “The White House has established an alliance of convenience with the local Republican machine that once opposed Trump in the 2016 primaries, but since then has helped him fan the flames of anti-socialist attacks to a despicable and unprecedented level. 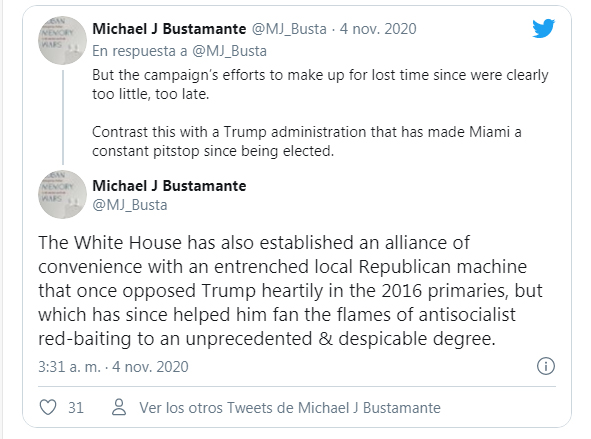 8.-There is no “Mexican vote” even though it is geographically concentrated in territories that one day changed sovereignty. There is no “Soviet vote” or “Chinese vote”, despite the fact that the Cold War translated into enormous hostility towards the former USSR and China, which originated the respective migratory flows of those nations.

9.The “Cuban vote” is politically conditioned. Like any significant social group, among Cuban Americans there was a sector that was dedicated to local politics and the rest to survival. Since the 1980 elections, a relationship of convenience was generated between the Republican Party and a Cuban-American elite that negotiated space and access within the US system of government, in exchange for a quota of votes. Both Republicans and Democrats have courted the Cuban community since then, but only in Florida. A not inconsiderable group of Cubans resides in the New Jersey-NY area and yet there is no recurring talk of the “Cuban vote.”

10.- In many US states the results of the vote are decided by a marginal amount of votes. Any group with a similar identity that expresses itself in favor of one or another candidate at the polls can make a difference, as we are seeing right now in the dispute over Georgia or Pennsylvania to decide the next president of that country. Cubans have run again and again as a bloc, to continue to benefit from federal funds, as do Puerto Ricans or Haitians living in Florida, for example.

As many analysts have pointed out these days, rather than reducing the complexity of this scenario to a stereotype, it would be necessary to assess the extent to which one or another campaign team has understood the changes that have taken place among Cuban-Americans and to what extent both Republicans and Democrats are betting on the real possibility of attracting supporters in that community.

The historical truth is that since 1980 the Republicans have invaded, conquered and established themselves in the Cuban-American media, while the Democrats have made furtive attempts in a field they consider alien and in which they have renounced a permanent presence.

Part of the Democrats’ weakness is that their main leaders share or coexist with the state policy of confrontation with Cuba, either through pressure or through a “democratizing” approach. The local South Florida Democrats repeat virtually the same messages of hostility against Cuba as their fellow Republicans, posturing as tough as the Republicans are, and end up ignoring and alienating those new generations of Cubans who are the vast majority and who neither aspire nor need to succeed from the funds of the programs associated with “regime change.”

In the elections that have just concluded, the Democrats saw their initial advantage over the Republicans in Florida gradually disappear. Among the first explanations was the performance of the supposed “Cuban vote.”  In reality, the votes Biden lacked were the result of the absence of support from other groups and minorities.

Democrats and Republicans may or may not choose to continue to cultivate the fiction of the “Cuban vote,” they may or may not continue to fund the federal programs that court them, but the truth is that time and again there will be a conflicting relationship between the foreign policy interests of the United States as a country and the electoral games at one point in that country’s geography.

In focusing on that tiny vote, in national terms, both parties are unaware of the position of large sectors of American voters who favor the most normalized relationship possible with Cuba and who have specific interests in business, science, culture, academic relations, health, and other sectors.

Behind Washington’s immobility with its unilateral sanctions on Cuba for more than 60 years, behind the power lent to Florida’s machinery of hate, calculation and despotism, old anti-communist rhetoric and the usual failure are mixed. We will see how the votes look when the final numbers are known – by the way, journalist John Kruzel of The Hill has denounced the fact that a significant number of votes were lost in the south of the state. Before crowing so much about the “Cuban vote,” let’s wait for the end of this stormy election recount that has turned the United States into a banana republic and Donald Trump into the most pathetic autocrat in that country’s history.