Not even the U.S. can block love for Cuba 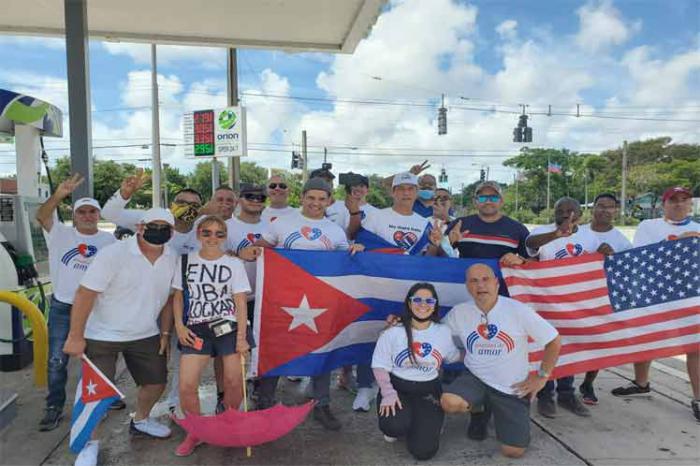 Not even the U.S. will be able to block love for Cuba

According to the Cuban Institute of Friendship with the Peoples, in addition to caravans, events and rallies, statements and videos were circulated on digital platforms, and two virtual events took place

After a month of walking, the Cuban Americans of the Bridges of Love project arrived this Sunday in Washington. Photo: Taken from Facebook

In around 40 cities in 28 countries, Cubans and people in solidarity with the Cuban cause marched this weekend, in the context of the world days of denunciation of the destabilizing actions promoted by the United States with the purpose of subverting the revolutionary process on the island and against Washington’s sanctions.

According to the Cuban Institute of Friendship with the Peoples, in addition to caravans, actions and rallies, statements and videos were circulated on digital platforms, and two virtual events took place.

Among the Latin American countries where activities were reported are the Dominican Republic, Barbados, Brazil, Costa Rica, Chile, El Salvador and Uruguay, while in Europe, those carried out in France, the United Kingdom, Italy and Spain stand out.

After almost a month of walking, Cuban-Americans from the Bridges of Love project arrived this Sunday in Washington DC for a sit-in in Lafayette Park, in front of the White House, where they demanded the end of US sanctions against the Cuban people, reported Prensa Latina news agency.

The group, coordinated by professor Carlos Lazo, demands the opening of consular services at the embassy in Havana, the resumption of flights to all Cuban provinces from the United States, and the reestablishment of the family reunification plan, among other demands.

As confirmed by Carlos Lazo, through Facebook, during the trip they spoke with many Americans of different creeds and ideologies.

He also pointed out that during the journey there was no lack of threats, but “here we are, gentlemen”, said Lazo, who pointed out: “we do not respond to provocations”.

In addition to the rally in front of the executive mansion, other actions were carried out from east to west of the country, in support of the Bridges of Love effort and the just demand to eliminate the economic, commercial and financial siege that has weighed on the Cuban people for more than 60 years, according to the Latin American news agency.

A petition signed by more than 27,000 people will also be delivered, demanding that President Joe Biden fulfill his campaign promise to bring about a change in policy towards the largest of the Antilles.