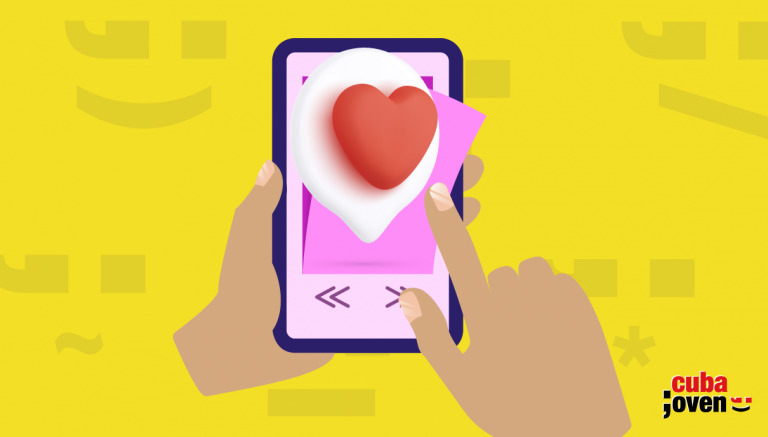 You made a match! Singles online… How to hook-up online in Cuba? “Precious… can we talk?”, “What a beautiful photo”, an emoji or a simple “hello” (in the best of cases) are some of the pretexts to start a conversation in any application to meet people. That yes —and it is the most important thing— before you have to do “match” with that other user. In other words, mutual taste is mandatory in the package.

On the Internet, there are countless dating sites for singles who are faced with the extremely difficult decision of choosing between many providers. They then compare the different options based on certain parameters such as the number of registered members, cost and payment methods, chances of success, placement and features.

Although Tinder was launched in 2012, the world’s leading dating and encounter application, the app trend in Cuba would come years later. But not everything is rosy, since most of the popular platforms in the world and those with the most users are blocked on the island and to use them it is essential to enable a VPN, which hides the real location of the device.

The operation of most of these applications is simple with the aim of facilitating navigation by its users. You register, fill out a profile with photos and the data you want; then they locate people near you and present you with possible options. Then you swipe left or right to decide if a person catches your eye or not. When two users like each other they “match” and only then activate the possibility of chatting.

Both, Badoo,  Lovely, Yooppe and Cubamor are some of the app names available from Cuba. Registration is free in its standard version, except for the premium subscription that unlocks greater benefits such as exploring “the most coveted” or seeing unlimited profiles.

There are also some Telegram bots like Flirtur, which, with the same functioning of the applications where you look at photos and reject or accept according to your tastes, has its own chat, which in practice nobody uses, and the users who make a match exchange contact information to communicate through more everyday channels such as Telegram or WhatsApp itself.

Some applications have more advantages than others, for example, in Lovely, you have the option to verify your photo and you can see which of the people who like you have opted for this option or not. It is an effective method to verify that the person you are chatting with is at least who they say they are in their profile picture.

In a daily search on Both, you can see up to 50 new people: in each load, the people who appeared the previous time are excluded, but profiles that you saw at a certain time can be repeated. In some of these applications you can choose what you are looking for according to your sexual orientation, but unfortunately not in others.

According to a survey carried out based on participant observation, if you ask what people look for in applications to “flirt”, the majority of users say that they meet people and see what comes up. The 28 respondents say that so far they have not been successful in their search.

Cubacitas: From success to failure Although there are many Cubans registered in these applications, most are not specifically designed for the largest of the Antilles, with the exception of a few like Cubacitas.

In the first three months of its launch (September 9, 2019), it exceeded 37,000 registered users and it was only possible to download it through the official website. It was later placed on the Google Play Store, but it didn’t last long and ended up disappearing from the main Android app store. It has never been available for the iOS system.

Cubacitas has been inactive on social networks since January 2021, on its website it is no longer possible to find a link to download it. According to Raúl Reyes, its creator and CEO, it was difficult to maintain an application in which you invest money and time all the time and do not see the profits. “Paying to keep thousands of users on a server is expensive, and it doesn’t make sense.”

Cubacitas’ attempt was left there, like a chronicle of an announced failure.

Advantages and disadvantages of “hooking-up online”

While there are people who are looking for something quick, casual, momentary, or even casual sex, there are others who are on the app because they want to find a partner. That is one of the main disadvantages: they are all in the same place, and although in most of these apps you can clarify what you are looking for in your profile, this option is not always chosen or those who liked you, and they ignore the data.

On these platforms, there is an obsession with the superficial, the cult of beauty, and the filters in the photos. All with the goal of passing a visual test of others. Never better said that “the essential is invisible to the eye”; the important thing is those details that cannot be verified in an online cover letter.

There are people who become addicted to these platforms and their self-esteem depends on how many they pay attention to or how many times you “match”. Others create an “imaginary story” about who they really are, for fun or because it’s easier to come up with a new personality when you’re not satisfied with your own.

The term “ghosting ” comes into this scenario, which consists of the total disappearance of someone without explanations or apparent reasons. According to a study in the International Journal of Environmental Research and Public Health cited earlier in Cuba Joven [not Joven Cuba, wl], the victim often experiences feelings of helplessness and loneliness and feels a lower degree of satisfaction with life.

In addition to these more contemporary terms, harassment on the internet and scams are two of the main risks of using dating applications, which do not stop reflecting problems already present in our society, such as harassment for reasons of sex, but which take advantage of the anonymity that these networks and apps allow.

In short, you only know about that person that you have what they want on the other side of the chat. Add to that the access to data such as the location of users, their place of work, their name and contact information that makes them vulnerable to cyberbullying or even physical harassment. So a lot of tact.

Actually, the objective of these platforms is that you do not find a partner and that you try again and again. Unfortunately, this is how the market works and there are not a few who fall into the trap.

Despite all these disadvantages, with many precautions, expectations and the correct self-esteem, you can be one of those “lucky ones” who have found the love of your life in the dating apk.

The important thing is to be clear at all times what you want and how far you are willing to go.

Finding a match with the help of algorithms offers a certain guarantee of compatibility. In theory, applications of this nature are based on this operation. Love is chemistry, and those algorithms become weak as the person becomes more complicated and complex.

Staying alone in the virtual prevents the surprise factor generated by interpersonal encounters from being unleashed. Nothing can ever beat non-verbal communication through looks, gestures and touch itself. The chemical attraction between two people is not stopped by a thousand “matches”.

How to hook-up on the internet? Here are some tips based on a few weeks of research: Cubadebate journalist. She graduated in Journalism from the Faculty of Communication of the University of Havana (2019). Contacts: thalyfuentes14@gmail.com. On Twitter: @ThalyFuentes

Head of the Department of Multimedia Production and Innovation of Cubadebate and the Roundtable. Graduated in Journalism in 2016 from the University of Holguín. Contact: edilberto@cubadebate.cu On Twitter: @edctamayo