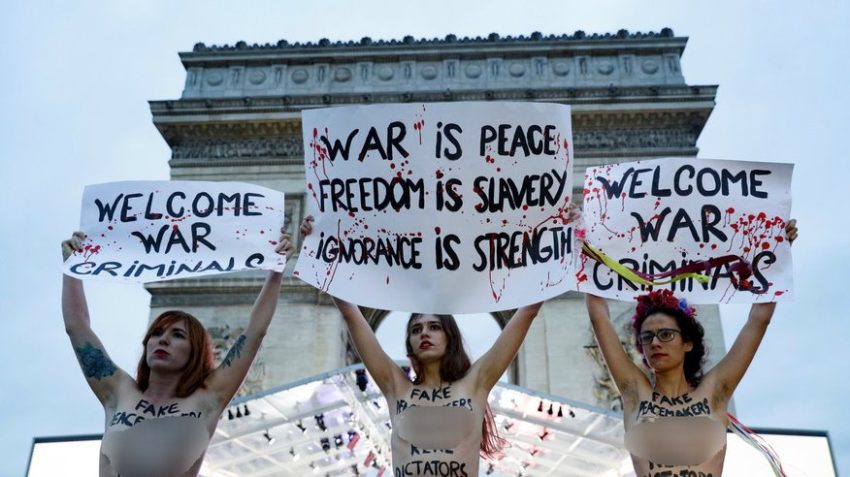 Activists welcome with protests world leaders who will celebrate in Paris the centenary of the end of World War I. 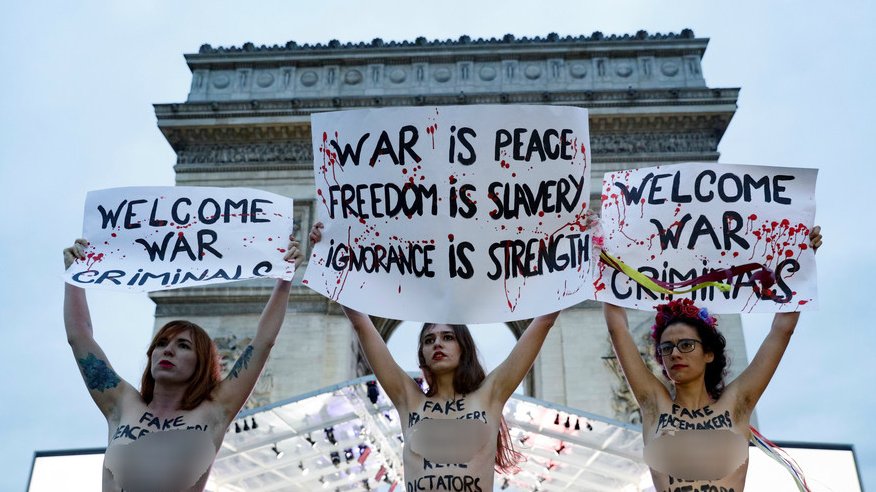 PARIS, November 10. – Three activists from the radical feminist organization FEMEN were arrested in this capital last Saturday after an action under the Arc de Triomphe in which they accused the world leaders gathered in France to commemorate the end of the First World War of “hypocrisy” and “war criminals,” including U.S. President Donald Trump.

The women, with their breasts in the air -characteristic of the demonstrations of this group that was born in Ukraine-, jumped from a car in the Place de l’Etoile and climbed the barriers of the platform where 70 high international guests are expected to attend the ceremony this Sunday, November 11, which marks the centennial of the armistice.

Beneath this famous Arc de Triumph lies the Tomb of the Unknown Soldier – an anonymous human being among the ten to 31 million people who died in that global conflict. The signing of the armistice between Germany and the Entente countries that took part in that holocaust is commemorated there every year, and this year 2018 acquires a special connotation.

With flowers in their hair and the accusatory phrase “False pacifists, royal dictators” painted on their torsos, the women raised posters with the legend in red blood: “Welcome war criminals”.

Another sign cited the famous mantra in George Orwell’s 1984 novel: “War is peace. Freedom is slavery. Ignorance is strength.

President Donald Trump, who has already met at the Elysée Palace with French host Emmanuel Macron, and the media say differences arose, also received a response on Twitter this Saturday from British politician and Winston Churchill’s grandson, Nicholas Soames, because the American president canceled his scheduled visit to the American cemetery and memorial of Aisne-Marne, in northern France, under the excuse of “logistical difficulties caused by the climate,” according to a White House statement cited by The Hill.

@NSoames was categorical in his tweet: “They died in the face of the enemy and this pathetic and inadequate @realDonaldTrump cannot even defy the climate and pay his respect to the fallen,” to which he added this hashtag on Trump: #hesnotfittorepresenthisgreatcountry.

Apparently, instead of Trump and his wife Melania, the White House Chief of Staff, John Kelly, and the Joint Chief of Staff, General Joseph Dunford, will attend the Aisne-Marne memorial. This cemetery is at the foot of the hill where the Battle of Belleau Forest was fought, in which some 2,000 U.S. Marines died in June 2018.

According to The Guardian, among veterans groups, a progressive organization, VoteVets, responded angrily in a tweet: “Donald Trump complained that he had to stand in the rain to talk about the Pittsburgh massacre, because he ruined his (more) hair,” referring to Trump’s comments after a massive shooting in a synagogue two weeks ago in which 11 people died. “Today, he will fail to honor the fallen American heroes of World War I and stay in his hotel room because of some rain.

When French President Macron visited the White House in April of this year, he brought Trump a tree from the Belleau Forest as a gift, but the shoot was briefly an object of intrigue when it disappeared from the White House lawn where Trump and Macron had planted it, The Guardian reported, but it was later revealed that they had been temporarily removed for quarantine.

As for the differences demonstrated in the meeting now in Paris, the Spanish daily El País quoted Trump on his arrival at the Elysée: “We want to help Europe, but it has to be fair. We have to share the burden. Today it’s the US that pays to protect Europe, and it’s not fair. There are limits.

A few hours earlier, he had heavily charged his host via his favorite, Twitter: “Macron has just suggested that Europe create its own army to protect itself from the US, China and Russia,” Trump wrote as soon as he landed in Paris on Friday night. “Very insulting, but perhaps Europe should first pay its share to NATO, which the United States largely subsidizes!