Terror in the United States

Terror in the United States:
72 Hours Filled with Hate

On Wednesday, October 24, a white man with a history of violence shot and killed two African Americans, apparently at random, in a store in Kroger, Kentucky, after a failed attempt to break into a church.

After “mail bombs” were sent to people who are President Donald Trump’s main political critics and enemies, authorities arrested a suspect, a man who had vilified and stigmatized Democratic supporters and minorities with hateful messages on social networks.

Those three criminal incidents that occurred in just 72 hours had only one thing in common: hatred.

Death in the grocery store

Gregory Bush, a 51-year-old white man, first attempted to enter a church in Jeffersontown, Kentucky, just outside Louisville. It was the first predominantly black Baptist church, and Bush supposedly knocked on the door and tried to open it, but failed to get in. The doors were closed.

He then went to a Kroger chain store, where he shot two people, both African Americans. The first victim was Maurice Stallard, 69, who was with his 12-year-old grandson. The second was Vickie Jones (67) who was killed in the parking lot while the attacker fled.

Gregory Bush has a long history of mental disorders, of making racist threats, and repeatedly called his ex-wife the N-word (nigger), as part of a long criminal history that includes domestic violence, and other disturbances of order.

As the shooting in Kentucky took place, the number of suspicious packages in the mail grew.

The first was discovered Monday afternoon at the home of Democratic (and multimillionaire) donor George Soros. On Wednesday morning, two more, one addressed to former Secretary of State Hillary Clinton, and another to former President Barack Obama. Four more were to be found before the end of the day, including a bomb-package sent to CNN’s New York offices, which led to the evacuation of the entire Time Warner Center complex. Another package was addressed to former CIA director John Brennan.

On Friday, news of more packages arrived and then the arrest of a 56-year-old man named Cesar Sayoc, a Florida resident. Federal authorities said they sent a total of 14 bomb-packages (the kind we know in Cuba as “nipples”), none fortunately detonated, but they were all very real.

Sayoc’s political inclinations were passionately exhibited. On his van, he had a tag that said “CNN sucks. Through two Facebook accounts and three Twitter accounts, Sayoc often posted provocative photos and comments attacking liberals, along with crude conspiracy theories against the United States.

Massacre in the Synagogue

On Saturday morning there was a massive shooting at a Pittsburgh synagogue, where hundreds of worshippers had gathered at 9:45 am. Suddenly, a man came in screaming anti-Semitic insults with two guns and an AR-15 rifle and opened fire. He killed 11 people. Six more were injured.

Robert Bowers, 46, was identified as the gunman and arrested. He had frequently expressed his disdain for Jews in social media and also published xenophobic comments alleging that Jews were helping to transport members of migratory caravans in Latin America.

Rejected by the People of the United States 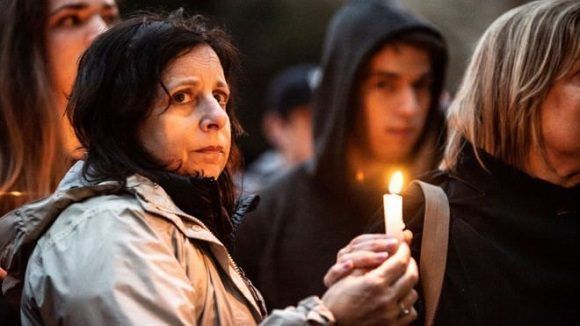 Hundreds of people, both in the Squirrel Hill neighborhood and throughout Pittsburgh, gathered hours after the attack for an interfaith vigil on behalf of the victims. Photo: Getty Images.

Hundreds gathered for a Saturday night vigil in Squirrel Hill to mourn the victims of the synagogue and show support for the Jewish community.

At 5 p.m. a vigil at the Jewish Community Center (what we know in Havana as the Hebrew Community) in Woodbridge, Connecticut, brought together more than two thousand people from New Haven County.

The attendees were Christians, Jews, Muslims (2 families, one Turkish and one Bangladeshi), whites, blacks, Hispanics, Asians, children, adults and the elderly. All the best of the American people were present.

I asked several people what they thought about the cause of this unprecedented terror. All the presenters agreed that President Donald Trump’s policy of hate and threats (both nationally and internationally), the irresponsibility of his comments in the media, and his unrestricted support for the NRA (National Rifle Association) contributed to and motivated these crimes.

Was one of the three terrorists an Islamic fundamentalist? Or a radical leftist fanatic? A Russian, Chinese or Venezuelan agent? None of the above, all supporters of Donald Trump, all with a history of violence, which one imagines would give him no chance to buy arms or ammunition. Everyone in the vigil comments with anger.

Donald Trump, with his irresponsible tweets and media shows insulting minorities and anti-immigrant attitudes, has been the catalyst that the sewage of American society has overflowed and is flooding the country.

With great prudence, I asked some attendees what they knew about the “embargo against Cuba” and about the upcoming U.N. vote. Two people told me that they knew absolutely nothing about the blockade and assured me that they would be informed about it. Two others told me that they knew about the blockade and that they were vertically against it. And one of them, Eliot Meyers, looked at me in astonishment and asked me, “But didn’t Obama remove the embargo against Cuba? I explained to him that the “embargo” is in force and being applied with a maximum of inclement and cruelty by President Trump. Elliot lowered his head and said to me: “These are the same criminals, those who kill in the synagogues or send bombs and those who want to destroy the Cuban people. Elliot is an appliance dealer from Orange, Connecticut. 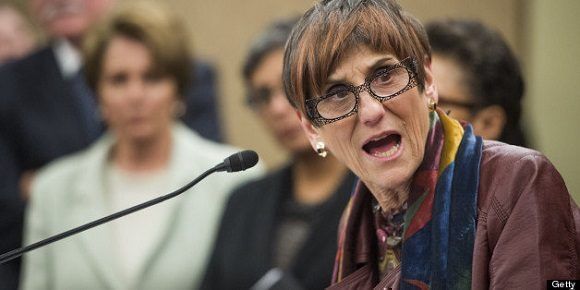 The pain and bitterness continue throughout the U.S., on a Sunday when people would normally talk about American football games (the Pittsburgh Steelers play at home) and the crucial fifth game of the World Series between Boston Red Sox and the Los Angeles Dodgers. But on this occasion, thousands and thousands are on the street protesting the terror of the fascists and supremacists, and more importantly, their causes, which now have a consensus in the understanding of the people.

The victims will remember the tragedies of those 72 hours filled with hatred, for a long, long time. As early as November 6, in the midterm elections, these savage crimes will motivate hundreds of thousands to go to the polls that day and vote against those who are trying to lead the U.S. to unbridled, uncontrolled fascism and humanity to its certain destruction. Of the many phrases and posters I saw and heard, there were some that impressed me in a special way. One sign read: “We cannot cure a fool, but we can vote against him. 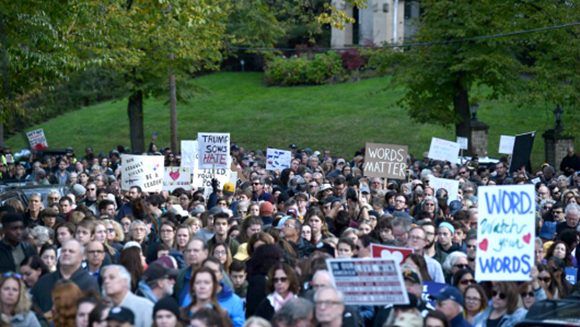 Hundreds of demonstrators protested Tuesday in Pittsburgh against U.S. President Donald Trump’s visit to the synagogue where 11 people died in an antisemitic attack this weekend.

Demonstrators gathered near the Tree of Life synagogue, where the shooting took place, with banners bearing legends such as “President Hate Out of Our State” and “Trump, Renounce White Nationalism Now,” referring to criticisms that the president has not done enough to stop hate speeches.

Trump arrived at the synagogue on Tuesday accompanied by his wife Melania, his daughter Ivanka and his son-in-law Jared Kushner. The president plans to light a candle for each of the victims of the shooting that shocked the United States.

But for some local personalities, Trump’s visit was not welcome.

A group of Pittsburgh Jewish leaders published an open letter in which they blamed Trump for encouraging the nationalist sentiments that generated the attack and said that until he strongly denounces this and stops attacking “immigrants and refugees,” he will not be welcome in the city.

Former synagogue president Lynette Lederman told the president on Monday to stay away from Pittsburgh, describing him as a “provider of hate speech.

The town of Pittsburgh, still in shock after suffering the worst antisemitic attack in recent U.S. history, buried on Tuesday two of the victims of the tragedy, brothers Cecil and David Rosenthal, 59 and 54 years old.

(With information from AFP) 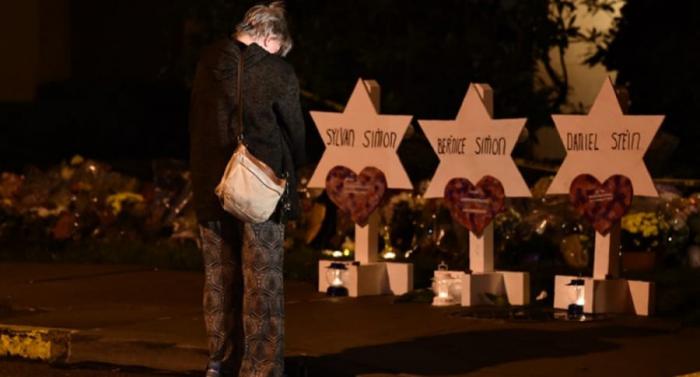