If the Capitol Assailants had been Black? 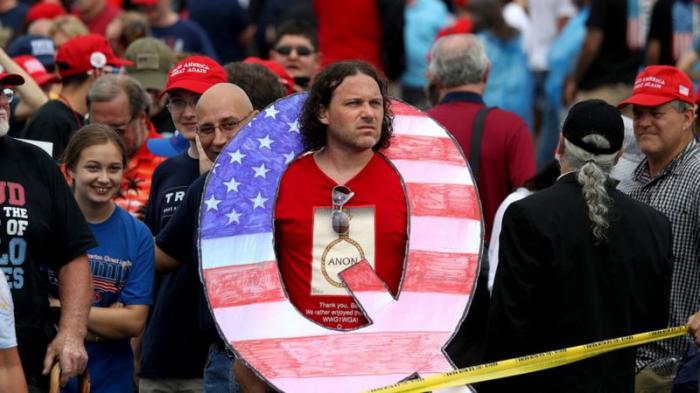 What if the assailants at the Capitol had been African Americans?

In the 1940s and 1950s, the segregationists adopted the flag as the emblem of their battle to prevent movements that emerged to advance the rights of African Americans. In essence, it represents the racist southern culture

It was not by chance that a mob of supporters of President Donald Trump, all of them white-skinned, razed the Capitol’s fences, pounced on the police guarding the building and, with little resistance, forcibly entered the compound. Nor was it by chance that one of them walked through the corridors waving an enormous “confederate” flag.

This was possible because hours earlier, Trump had incited them in the Save America march, to support him in a desperate and last attempt to prevent Congress from certifying Joe Biden’s already recognized victory.

It was, moreover, a racist assault. No African Americans participated in that violent demonstration, and the Confederate flag, a historic symbol of racism and the defense of slavery in the United States, was flown for several hours without being stopped by any police officer. 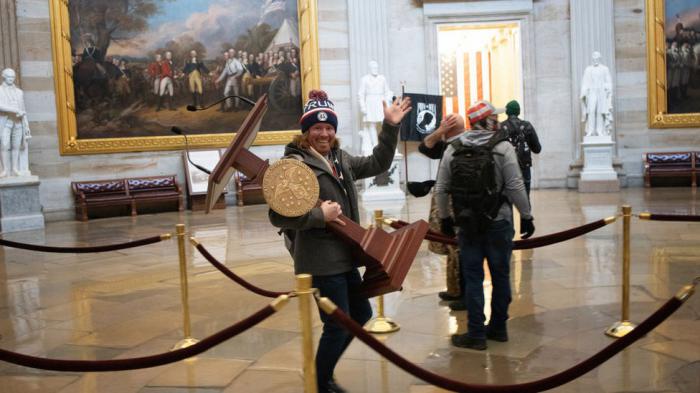 Some of the leaders of the demonstration, identified as members of extreme right-wing conspiracy theory and white supremacist organizations, are trying to distance themselves from the vandalism, claiming that the destruction was caused by anti-fascists.

But the police have already located and arrested Jacob Anthony Chansley, known as Jake Angeli, who is considered the “shaman” of the QAnon. Members of the QAnon movement, which appears to have begun in October 2017, consider Trump a hero. 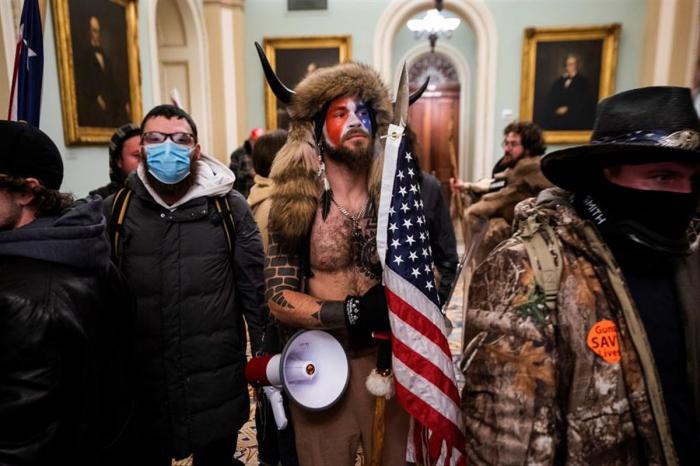 Its militants believe an unfounded theory. They say that President Trump is waging a secret war against pedophiles from the elite of the U.S. government, business and media who worship Satan, and that one day there will be a reckoning among political figures like former presidential candidate Hillary Clinton.

In this case, Jake Angeli is the man photographed inside Congress with his face painted and dressed in a bearskin and horns on his head. In addition, he carried a spear with an American flag tied to the blade, and who calls himself “The Wolf of Yellowstone.”

Richard Barnett, a follower of President Trump, is also in custody. He is pictured sitting in the office of U.S. House Speaker Nancy Pelosi. 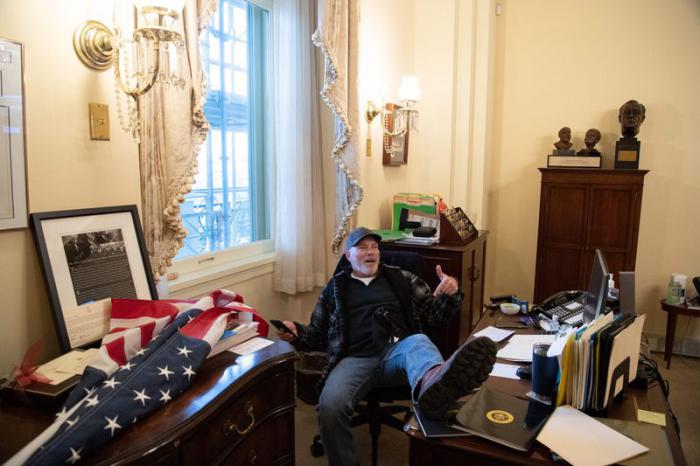 WHAT IF THE ASSAILANTS AT THE CAPITOL HAD BEEN AFRICAN-AMERICANS?

“When whites attempt a coup, they run into a small number of agents who can’t do anything and who even take selfies with the terrorists,” they said. 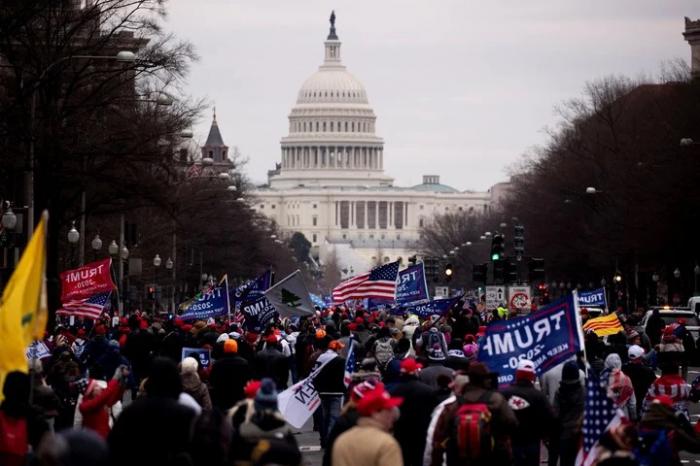 A statement on Twitter was written by Michelle Obama, wife of Barack Obama, the first Black president of the United States:

“To those who criticize others as unpatriotic for simply kneeling in protest, to those who wonder why we even have to remember that Black lives matter, it has become painfully clear that some Americans are, in fact, allowed to degrade the flag and symbols of our nation. What do they have to say now?”

What do Joe Biden and Donald Trump think about January 6?

NBA legend LeBron James was blunt in his denunciation:

Florida Senator Marco Rubio released a video on Friday comparing the attack on the Capitol by supporters of President Donald J. Trump with protests by Black Lives Matter, the racial equality and justice movement.

Rubio said the invasion of Congress was similar to the protests the left had been “justifying” last summer in cities across the United States following the murder of George Floyd, an African American who died in Minneapolis police custody.

So far, more than 80 people have been arrested and four died in the assault on the Capitol. Police found 11 Molotov cocktails on an Alabama man.

THE CONFEDERATE FLAG CARRIED BY THE CONGRESSIONAL ASSAILANTS

Between 1861 and 1865 a civil war developed in the United States that confronted the southern states (Confederates) that defended, contrary to the foundations of the northerners whose leader was Abraham Lincoln, the maintenance of slavery in the states of South Carolina, Mississippi, Florida, Alabama, Georgia, Louisiana, Texas, Virginia, Arkansas, Tennessee and North Carolina.

After the defeat of the Confederate states, the banner carried by their troops in the civil war reduced its public presence but reappeared in the mid-twentieth century with racial segregation.

The first Confederate flag was composed of two red bars and a white one in the middle, with a blue box in the upper left that had a circle formed by stars. However, its successor, the red one, which contains a blue cross with white borders and stars, was the one that became popular. It was the symbol of the Battle of Virginia. 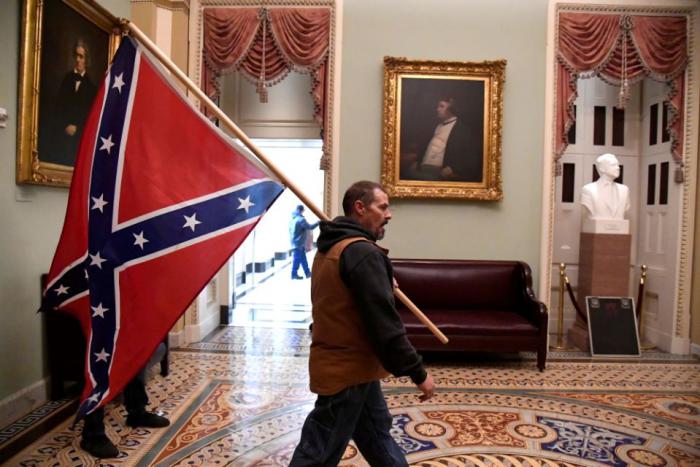 In 1863, the Confederate Congress recognized the Northern Virginia flag as its official symbol.

The descendants of Civil War veterans placed it on the nation’s monuments, so it gradually became an icon of Southern culture

In the 1940s and 1950s, segregationists adopted the flag as the emblem of their battle to prevent movements that emerged to advance the rights of African Americans. In essence, it is the representation of Southern racist culture.

Some time ago, the U.S. Navy decided to ban this flag from all Navy facilities, including ships, planes and submarines.