Home Struggle Against Price-Gouging in Cienfuegos

Struggle Against Price-Gouging in Cienfuegos

Abuse and Cheating May not
Always be Carried in the Carts

Systematic control actions for the correct performance of different activities of daily life are developed in Cienfuegos, with special emphasis on the sale of food. 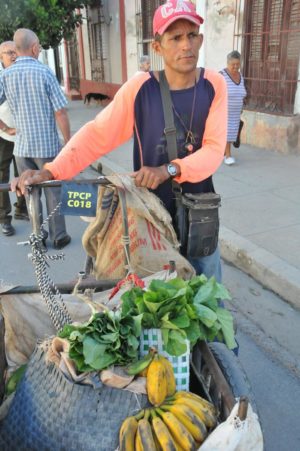 Cienfuegos: Although there is still work to be done, in this province since August of last year to date, systematic control actions have been developed for the correct performance of social dynamics. These include key bodies such as the Provincial Government’s Confrontation Group, the National Revolutionary Police (PNR), the Integrated Supervision Directorate (DIS), the State Traffic Unit (UET), the Agriculture Delegation, the State Inspection (the so-called blue transport inspectors) and the National Fisheries Inspection Office, among others.

One of the most sensitive activities is the sale of food. The population demands protection from those who want to take advantage of this basic need. Despite the existence of some illegals, 635 cart drivers are officially registered in Cienfuegos, which is part of the non-State sector. Raúl González Quintana, secretary of the Provincial Administration Council (CAP), said that “its essence is to bring agricultural products to the neighborhoods, to the families, for people’s convenience. That is why we insist on its ambulatory character, similar to that of the bread vendor. According to the rules, they must acquire their merchandise in the retail network (points of sale, small squares, organoponicos), which is not always the case.

“We know of trucks that move goods in large quantities and supply the vendors, instead of fulfilling the actual destination of such production. We have identified some of these clandestine warehouses, but we have not yet achieved all the effectiveness required. These places are a problem: they feed resale and bring with them hoarding, with the diversion of products contracted in advance by Acopio and included in its distribution balance,” he said.

“Acting against the warehouses requires an operational work, of which we participate as long as we are called. A group is already working in the government to evaluate in detail the actions against criminal acts of greater complexity,” explained Paulino Pablo Diaz Santillan, director of the DIS.

Lieutenant Colonel Edgardo Hernández Lorenzo, second in command of the PNR {National Revolutionary Police] in Cienfuegos, said that “a group of house warehouses was dismantled, which – as is known – are dedicated to receiving agricultural products that come from Cienfuegos or other provinces, mostly illegally, without papers, without going through the relevant channels such as Agriculture or Stockpiling, to then distribute them to the illegal vendors.

To avoid these practices, which make the consumption of food more expensive and harm the supply network, “at the end of 2019 we noticed three trucks coming from Jagüey Grande, Matanzas, with large quantities of pineapple, cabbage, yucca, peppers and tomatoes, among others, specifically to supply house-stores. There was no documentation to support the cargo, so they were driven, fined by the Agriculture Department and the merchandise was totally confiscated. In case they were repeat offenders they could be subject to criminal proceedings and receive sanctions by the Court.

“About twenty points of sale were also eradicated, that is, places that can be the same in a house or anywhere else and that are also dedicated to the sale of agricultural products in an illegal manner and with their logical overpricing,” he added.

He said that in 2020 “we will continue to confront these distribution and commercialization networks of house-stores. We will also go after the trucks that are detected in order to supply them with products in clear violation of what has been established. [Our goal is] so that the food reaches the people without the overcharge prices they usually seek,” he said.

In order to improve the work with the truckers who do not disrupt their work, with the participation of the State Commerce Department, the Agriculture Delegation and the Self Employment Attention Group. The owners were identified and identification tags were made. These are being placed on the trucks right now in the different people’s councils of La Perla del Sur, with specific numbers for each one.

Diana Serpa Diaz, secretary of the Municipal Administration Council (CAM), explained that although the provincial capital registers some 150 cart vendors, more tags were designed to include legal vendors who are registered in other municipalities, but operate in this city. “These will even have a different numbering, so that people can recognize them,” she said.

The official warned that, “as of March 1, those who do not have the corresponding signage will not be able to do so, and the people will know that they may be vendors who violate the law and will have the possibility of notifying the government, the Integral Direction of Supervision, and the police of their existence.

The Provincial Confrontation Group in Cienfuegos continues its actions based on the prevalence of order, control and compliance with what is established in all areas, both by the Central State Administration (oace) and by the Provincial Government.

For this reason, in January of this year, the entities that make up this body carried out actions that not only demonstrate the systemic nature of the monitoring, but also that the violations continue: the same in the state sphere as in the private sphere, said Florentino Pérez Valladares, an official of this body.

Agriculture maintained this effort, led by the provincial government and in conjunction with the PNR, which allowed the identification of violations. This resulted in the seizure of 41 kilograms of lime and two cattle for causing damage to plantations, while a couple of trucks loaded with bananas and donkey banana [platano fruto and platano burro], without papers, were arrested.

In both cases, the cargo was seized and the drivers were fined 2,000 pesos, pursuant to Decree-Law 191. Agriculture applied 18 fines in the period, amounting to 56,900 pesos.

It also maintained its work during the month of January in all municipalities, with greater incidence in Cienfuegos (779 fines were imposed in the amount of 64,785 pesos in national currency). Florentino Pérez Valladares added that, in terms of self-employment, other breaches were detected, including having illegal personnel carrying out different activities, which demanded the imposition of fines according to Decree Law 357, which prevents these people from not having labor guarantees when they are hired.

Despite the continued work of these confrontational structures, dissatisfaction persists. Alina Guevara López, a sexagenarian who has bought from the cart merchants, in the face of the shortage of state agricultural markets, says they are setting abusive prices.

In the opinion of Yankiel Saldívar Vázquez, “despite the fact that their salaries have been considerably increased, there are still some inspectors who do not fulfill their role”.

There are also other truck drivers who, legal or not, hide when inspectors arrive who they know cannot bribe, shared Angel Hernández López from Cienfuegos.

“There are trucks that continue to arrive from agricultural poles, with food from the town that they divert with impunity,” said another citizen who did not want to give his name.

These four people agree with that of other Cienfuegos interviewed for this report. The people support the fact that a few rascals do not continue to abuse the sweat of others, who are hindered in their existence by outrageous offers that were destined for the market at reasonable prices. However, what is being done shows that it is possible to stop the cheating and the crime from being transported by the cart, and to stop the illegal supply chains from being encouraged.