Home Priorities for the LGBTI Community

Priorities for the LGBTI Community

During the Days Against Homophobia and Transphobia, the interest of the international media in hearing the opinions and expectations of those of us who advocate for lesbian, gay, bisexual, transgender and intersex (LGBTI) rights in Cuba is growing exponentially. 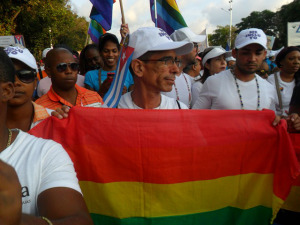 A colleague who works for the Russian publication Sputnik asked me to comment on the response of Cuban society and its institutions to the educational and advocacy work of the past decade, the progress made, and the issues to be resolved.

Before reproducing here the interview that resulted from this exchange, I would like to complement it with a few ideas that, due to the necessary journalistic synthesis, were left out when editing this text.

On the reactions to the debate on how to deal with discrimination on the grounds of homophobia and transphobia, I would just like to emphasize that the Cuban people have a great sense of social justice, and I would like as a rule to be better at this aspect of human rights too, so that they want to listen to arguments, argue, confront their fears and concerns, and – in the end – understand and grow.

Among the advances I listed, I would also like to rescue the articulation of networks of LGBTI activists – and which also include many heterosexual people in solidarity with our rights – which contributes to the visibility and promotion of these issues.

Finally, in relation to the points to be resolved, Sputnik only included the recognition of homoparental families and their legalisation by marriage or another similar legal form, although my list of priorities was a little longer and more complex.

I will now list those other aspects which I also consider to be still unresolved, and on which we will have to continue to insist in the coming years:

Specific protection against homophobic and transphobic violence and harassment in the Penal Code.

Recognition of gender identity without the need for genital reassignment or court rulings through the Civil Code.

The possibility of assisted reproduction for lesbian couples and the right to adoption for homosexual couples in general.

Affirmative policies to increase access to education and work for trans people.

Non-exclusion of any type of employment, including the armed forces.

Improvement of the procedures for the actions of the police and other institutions guaranteeing socialist legality in order to avoid discrimination on these grounds.

Implementation of curricular and extracurricular programs based on a comprehensive sexuality education that provides teachers, students and families with scientific tools to confront bullying and school violence due to homophobia and transphobia.

Cuban discussions against homophobia and transphobia

HAVANA (Sputnik) – The 11th edition of the Program against Homophobia and Transphobia, which will be held in Cuba until 18 May, encourages discussion on the rights of the lesbian, gay, transgender, bisexual and intersex (LGBTI) community, Cuban journalist and activist Francisco Rodríguez Cruz told Sputnik.

“The (Cuban) population knows and discusses this problem, and is eager to receive information about it; there are opinions in favor, and others not so much, that are still related to ancestral prejudices, scientific ignorance and cultural obstacles, but in general the trend seems positive to me,” said Rodríguez Cruz.

The current edition of the program, dedicated to the 30th anniversary of the National Sex Education Center (Cenesex), directed by the daughter of former president Raúl Castro, sexologist Mariela Castro, shows that Cuban society has responded to these meetings with great sensitivity, according to the activist.

“As we enter the second decade of this educational initiative, the issue is already on the Cuban political and public agenda,” he said.

In his opinion, “it is enough to follow the discussions that take place in the journalistic information about these days in the digital media and social networks on the internet, where people comment on their doubts, dissagrements and arguments in favor of respecting LGBTI rights, to appreciate the richness and honesty of the discussion. It ranges a position of wanting to know more, to where many more LGBTI people already participate with visible empowerment”, he stressed.

From the institutional point of view, “it is a strength to have Cenesex, which leads not only these days, but the entire sexual health and education program in the country throughout the year, on multiple topics,” he said.

This makes it possible to coordinate responses with other central government agencies, civil society organizations, universities and scientific and research centres.

“In the last decade, the confrontation with discrimination based on sexual orientation and gender identity was progressively understood and supported by the (ruling) Communist Party of Cuba, which explicitly included it in its most important governing documents,” Rodríguez Cruz said.

“This facilitates discussion within society and its institutions, without this implying absolute understanding by all party militants and people who have responsibilities in decision-making structures of the State and the Government, and who are not immune to the misunderstandings, prejudices and resistances of a non-negligible part of our citizens,” he stressed.

In his opinion, the main advance “is the widespread understanding that homophobia and transphobia constitute an anti-value, something that is not good, is wrong, and therefore, very few individuals assume it as an unbridled position”.

“Even people with prejudices or discriminatory behavior towards the LGBTI community claim to be neither homophobic nor transphobic,” said the activist.

From the political point of view, the inclusion of the principle of non-discrimination based on sexual orientation and gender identity in the Conceptualization of the Economic and Social Model of Socialist Development and in the Strategic Development Plan until 2030 is the main success, according to Rodríguez Cruz.

“Another milestone was the approval in 2013 of the Labor Code, the first Cuban law that expressly protects people from discrimination based on sexual orientation, in this case, in the workplace,” he explained.

In Cuba, there is free, specialized care for transgender people for psychological support, modification of their bodies and genital reassignment when they want it, something that “is also a significant result whose implementation dates back to 2008,” he said.

Unfortunately, however, “there are many more remaining issues,” he said.

“Further progress will have to be made in the implementation of legal norms and public policies that guarantee equal rights for LGBTI people, in areas such as the recognition of the families we constitute and their legalisation through marriage or another similar legal forms,” he said.

LGBTI activist hopes that some of these issues will come up during the debates and proposals that will accompany the already announced process of reforming the Constitution, and others will require further work of argumentation and elaboration.

“It is foreseeable that advancing in these goals of equity will imply contradictions, steps forward and even possible specific setbacks, depending on the nature and preparation of the political leaderships, the social consensus that we reach through educational work and the strength of the social activism that we are capable of promoting,” he concluded.

In the first decades after the Cuban Revolution, homosexuality was declared a deviation incompatible with the revolutionary process, and it was only in the late 1990s that the taboo on homosexuality was weakened in public debate.