An investigation gives details on how homo and transphobic bullying operates in Cuban schools, the theme of the annual program of activities that closes on May 18. 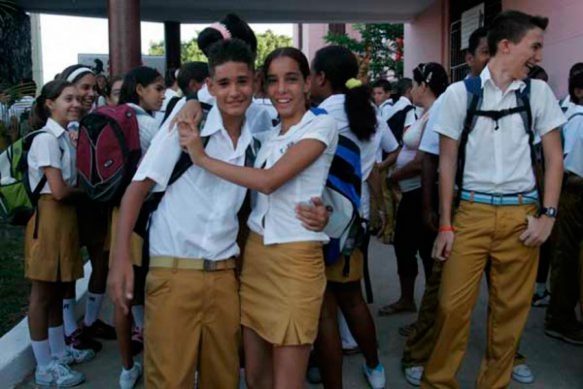 The study identified as times of greatest risk of bullying, school dismissal, school entry and exit, time between classes and recess in the playground. Photo: Jorge Luis Baños/ IPS

Havana, May 8 – Transgender people and lesbian women reported dropping out of school due to bullying, revealed a retrospective research on homophobia and transphobia in schools conducted by the government’s National Sex Education Center (Cenesex).

Conducted by a group of five authors, the exploratory and retrospective study on homophobic and transphobic violence in the school career of lesbian, gay, bi, trans and intersex (LGBTI) activists is the basis for the eleventh edition of the Cuban Days Against Homophobia and Transphobia, which for the second year focuses on schools.

According to the report, to which IPS had access, Cenesex researchers surveyed 90 adults from community social networks accompanied by the Cuban state institution, from Havana, Villa Clara and Santiago de Cuba.

The schooling of the population studied was concentrated in secondary education and, at the time of the research, 25 people were in higher education, mostly gay men.

Dropping out of school

However, 22 subjects indicated that they had dropped out of school at some point in their school career and only nine returned to school, most of whom were trans people seeking to complete high school.

The average age of dropout was concentrated at 16.6 years of age at the end of secondary school, with a majority being transgender people.

Of the 22 people who reported dropping out of school, 13 claimed that the decision was linked to the situations of violence they were subjected to in the school environment, an experience that prevailed among trans people and lesbian women.

Taunts and insults were the most frequent manifestations of harassment recalled by respondents, followed by threats, physical abuse, ignoring and stealing their belongings.

“There is no place in the school environment that escapes the phenomenon,” the report distinguished, identifying as moments of greatest risk the exit and entry to school, the time between classes and recess in the playground.

According to the study, the bathrooms and shelters were the spaces with the highest incidence of acts of abuse inside the schools, with verbal attacls that could be accompanied by physical violence.

The researchers emphasized that the measures implemented could be considered a form of revictimization, since they impacted on those who suffered harassment and not on those who committed it.

Who are they, anyway?

As the perpetrators of the violence or harassment, the students themselves dominated by a large margin, followed by the teaching staff, support staff and relatives of the victims.

Support networks within the school were virtually non-existent, according to the research, which found a tendency to normalize situations of violence.

The support, when it happened, came from students who were intervening to stop the abuse. The attitude of the teaching staff was aimed at silencing the facts and placing the blame on the victims, the sample studied reported.

Faced with violent situations, the mechanisms most often used by victims were to ignore what they were told, to isolate themselves, to try not to draw attention to themselves, or to respond aggressively.

The homophobic and transphobic violence experienced had an impact on the mental health of the victims, the study said.

Fears, fear of people’s reaction when reporting, poor school performance and rejection of school were some of the consequences observed.

However, the report argued that when research participants reflect on and evaluate these stages of their lives, they report that such situations have had a positive influence over time because they have strengthened their character.

The study concludes that homophobic and transphobic violence in the school setting reflects homophobia and social transphobia in Cuba.

The return to school and the recomposition of the victims’ life projects is an indicator of change for Cuban society and schools, the report said.

Raising the awareness of youth organizations to function as support networks for situations of violence in the school environment and strengthening the training of teachers and support staff for the prevention of homophobic and transphobic bullying are recommendations of the study.

It also suggests that educational authorities strengthen monitoring of the places where homophobic and transphobic violence is most prevalent.

Universal and free access to education and health, as well as the principles of equality established, are conquests that are endorsed in the current Constitution (1976), in its articles 39 and 50, stated the researchers in the introduction of the study.

However, in its opinion, the reduction of homophobia and transphobia to which lesbians, gays, bisexuals and transgender people on the Caribbean island are exposed remains to be achieved. (2018)

4 years ago Translations23
Priorities for the LGBTI CommunityWorld Orgasm Day