By Cuban members of Latin American Studies Association.
Spanish original, comments, and a place to sign on here:
https://www.ipetitions.com/petition/carta-abierta-LA 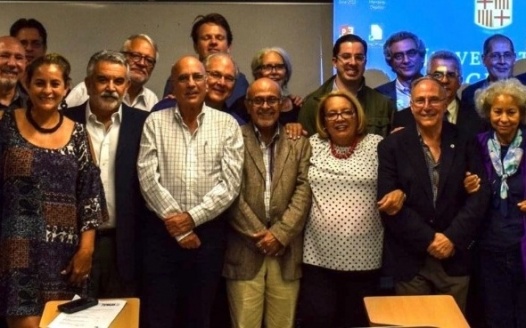 On relations between LASA and its Cuban membership.

For more than forty years, against all odds, relations of collaboration and exchange have been forged between Latin Americanists and academic institutions in the United States and Cuba. This cooperation has been possible because the spirit of dialogue and goodwill has prevailed over ideological differences, and has been able to overcome, with intelligence and perseverance, all obstacles, which have been legion. Wind and tide have included the legacy of mistrust, ideological mistrust, bureaucratic obstacles, attempts to hijack, politicize or instrumentalize the meeting spaces, among them, the one offered by the Latin American Studies Association (LASA).

No other North American institution has contributed so much to open the way for cooperation and to develop mutual trust between the two sides. Through that door opened thanks to the perseverance and patience of both sides, other institutions, universities, NGOs, foundations, research centers, agencies, organizations, and a stream of academics and intellectuals, artists and professionals in communication, social research and the sciences, have built, step by step, an alternative path, both to interference and to the fortress mentality under siege. Their merit, after more than four decades, has been to prevent the closing of a window of dialogue and understanding between civil societies and the culture of both shores, to create a climate of academic freedom, and to promote critical and rigorous social sciences and humanities.

So much progress has been made that LASA decided 24 years ago to set up a Cuba Section. This existed only with some countries in the field of Latin American studies, charged with fostering exchange and making democratic decisions regarding mutual relations, with the active presence of academics from both sides, both in its membership and in its governance. Each year, access to the Section’s membership and steering committee has been open to all persons eligible for membership in LASA. Its positions have been elected through open nomination and secret and direct elections. The Section’s membership and access to these positions have followed LASA’s own rules, which do not discriminate on the basis of gender, skin color or political ideology. Cuban members, particularly those of us who have played a role in promoting this exchange, have actively contributed to the respect for these rules.

Cuba should not be measured by a different yardstick than other Latin American countries, nor the United States itself. In fact, rejecting double standards and preconditions have been premises for intellectuals and artists involved in this exchange. LASA, however, has favored the continuity of our presence with specific policies for its Cuban members. It has made an effort to compensate for the disadvantages produced by US policies against Cuba. These reflect a Cold War pattern, which limits our access to those spaces; but also that of Latin Americanists there, whose research and academic and cultural programs in Cuba have been hindered, among other things, by mechanisms designed to prevent their counterparts from receiving direct support from the US. When LASA has adopted such special policies towards residents in Cuba, as well as when it has explicitly condemned the blockade, it has been consistent with an institutional position opposed to any ideological discrimination and in favor of the professional interest of its members.

The recent “Pronouncement on the protection of human rights in Cuba” does not facilitate the continuation of this pattern of understanding, nor does it contribute to the dialogue that has characterized our collaboration. Its effect is evidenced by the negative reactions it has elicited from both sides, in a short period of time, against LASA’s leadership, from opposing positions on the political spectrum.

This “Pronouncement” arose from a letter originally signed by a score of members, and a majority of non-members, which was echoed by the association’s Secretariat, despite being written in a tone alien to the respect it seeks to promote. Although the LASA “Pronouncement” does not have the character of a resolution, nor the tone of the letter that originated it, it does adopt a unilateral attitude, alien to the dialogue that has characterized relations. It states that LASA’s rejection of the blockade does not imply ignoring its “commitment to the values of freedom of expression, academic freedom and respect for human rights in the context of democracy, sovereignty and the rule of law.” As if those principles and values were alien to many of us, it adopts a sobering and strange tone, after so long of dialoguing and listening to each other.

If that text had been discussed with the members of the Cuba Section, we could have debated its real contribution and effectiveness in promoting academic freedoms and human rights. We could have explained how, throughout these difficult years, we have worked to expand critical discussion of our problems, not only in academic and cultural circles, but in civil society and among Cuban citizens, on the island and in the United States. We could have demonstrated how the exercise of academic freedom has extended to LASA’s exchange with institutions, researchers, professors and practicing artists throughout Cuba, beyond capital elites, who sometimes arrogate to themselves national representation. We would have presented a view of our problems, like the one we usually bring to LASA panels, neither satisfied nor apologetic, sharing lessons learned about democracy and sovereignty, from the concrete experience of having fought for both, as well as for a rule of law, which the current Constitution incorporates, and whose realization requires a climate of dialogue and understanding. None of the above is substituted by unilateral judgments.

This message from us to the LASA Secretariat does not suggest that it abused its prerogatives under the association’s bylaws, nor does it purport to represent the consensus of the Cuba Section. Nor should it be confused with any of the attacks against LASA that have been circulating in recent days. We write it as simple members of LASA, recognized by the award that the Section grants in democratic consultation with its members, for contributing to the development of this relationship. From that condition, we advocate constructive communication that avoids bad precedents and wars of pronouncements, the uncovering of which for any possible reason arising here or there would be harmful to bridges already exposed to incessant hostility.

It is no secret that during the short summer of the Obama administration, cultural and academic exchanges were the areas where most progress was made in terms of inter-institutional agreements. As is well-known, ideological polarization is the last thing that changes in Cuba need, as well as the delayed path of cooperation between Washington and Havana.

Only through the continuity of that dialogue, and the application of the concepts that govern LASA as an institution, will we be able to preserve a collaboration that has been an example of democracy and mutual respect, as well as contribute to the protection of our freedoms and human rights practices in the field of education and culture, here and there.

Spanish original, comments, and a place to sign on here:
https://www.ipetitions.com/petition/carta-abierta-LA