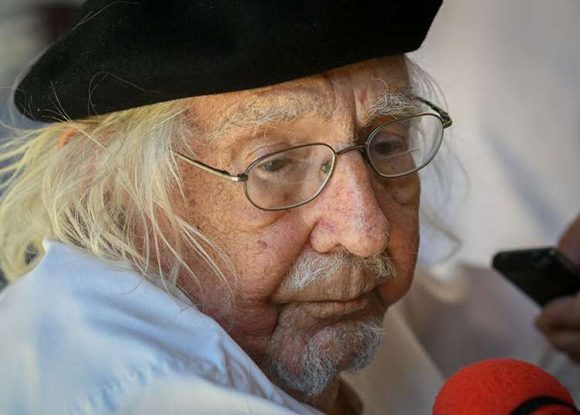 The poet Ernesto Cardenal died this Sunday afternoon in Managua at the age of 95. The priest was suffering from heart and kidney problems and had been hospitalized for a few days.

Nicaragua and Latin America are losing their greatest literary reference after Ruben Dario.

“I am a poet, a priest and a revolutionary”, was what defined the man who, in 2012, was admonished by Pope John Paul II for making a revolution together with the Sandinista Front for National Liberation (FSLN).

Cardinal, born in the colonial city of Granada in January 1925, was a poet, priest, theologian, writer, translator, sculptor and politician. His poetic work won him several international awards. In 2012 he received the Queen Sofia Award for Ibero-American Poetry. He was one of the most outstanding defenders of liberation theology in Latin America.

On February 4, 1984 -in the framework of the Cold War- Pope John Paul II imposed the suspension ad divinis (prohibition to administer the sacraments) to the priests Ernesto Cardenal, Fernando Cardenal (the poet’s brother), Miguel D’Escoto and Edgard Parrales due to their attachment to liberation theology. Thirty years later, on August 4, 2014, Pope Francis ordered that D’Escoto’s punishment be lifted, and Cardinal on February 17, 2019.

He poured his essence into his verses: the desire of women in his Epigrams, the concern about God, his revolutionary spirit in his poems against the Somoza dictatorship, his psalms, the conviction of social justice, and the famous Prayer for Marilyn Monroe.

On Monday, a mass will be held in Managua’s cathedral and the funerals will take place in Solentiname, an island in Nicaragua’s Great Lake where the writer, theologian and sculptor founded a community of peasants, painters and poets in the 1970s in support of the Sandinista Front.

Ernesto Cardenal: on Fidel: He is Not a Simple Character

For those of us who have known Fidel Castro (and love and admire him) it is difficult to give a brief portrait of him. Because contrary to what those who only know him from the newspapers (often hostile to him) may think, he is not a simple character to define, but a highly complex one.