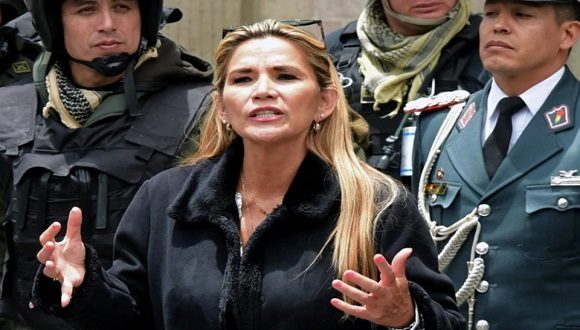 On Tuesday, it was revealed that the aircraft arrested in Mexico last January, coming from Guayaramerín, Bolivia, belonged to the Jalisco cartel and was supposed to finance the campaign of the de facto president of that South American country, Jeanine Añez.

As soon as the complaint about the arrest of the “Narcojet” on January 28  was made public, government minister Arturo Murillo was quick to say that “the drugs were loaded in the Chapare”. Days later, in the face of the rain of evidence, he had no choice but to admit that the cocaine came from Guayaramerín, a province bordering the lands of the de facto president’s family.

“The drug was on the plane without any method of concealment. It is clear that in the place where the cocaine was taken on board, there was no control whatsoever,” a judicial source commented to the Argentine newspaper La Nación. This means that the Bolivian arm of the Jalisco cartel had the protection of the police and the army. The accumulation of evidence complicating the de facto government led former presidential minister Jerjes Justiniano to ask for the resignation of government minister Arturo Murillo.

According to the newspaper La Nación, the aircraft that took off from Guayaramerín had a U.S. license plate (registration N18ZL GLF3).

A witness revealed that the drug belonged to the Jalisco cartel and that it was supposed to finance Jeanine’s campaign. In addition, a confidential informant testified that the profits from the transaction of 1,000 kilos of cocaine destined for the United States were to cover the costs of the campaign of Jeanine Añez Chávez, a senator and current self-proclaimed president of Bolivia.

The media, whose task has been reduced to shielding (protecting) the image of the self-proclaimed, swept under the rug Jeanine Añez’s family links to drug trafficking. The self-proclaimed woman is married to Héctor Hincapié, a well-known Colombian politician who is under investigation for his ties to the Cali cartel, and is the aunt of Carlos Andrés Añez Dorado, who was arrested in Brazil with half a ton of cocaine.

(With information from Primera Línea)