Moviemaking not spared by economic crisis

Moviemaking not spared by economic crisis

Even Hollywood shoots with caution given the   undeniable problems to get loans, the fear of recession and the little confidence in Wall Street.

Such a highly topical matter as the world economic and financial crisis, whose effects we feel in life’s every sphere, has not gone unnoticed by the seekers of ideas for possible plots that might become box-office hits. In fact, the sexagenarian Michael Douglas will once again be directed by the renowned Oliver Stone to deliver a sequel to Wall Street (1987), where he made an Oscar-winning portrayal of Gordon Gekko, a powerful, roguish tycoon who became filthily rich as a stock market speculator.

Wall Street 2 unfolds against the ideal backdrop of today’s disturbing crisis, which will provide the context to throw light on the same world of greed and corruption behind the upcoming The international, starring Clive Owen (as Louis Salinger) and Naomi Watts (as Eleanor Whitman).

Based on screenwriter Eric Warren Singer’s script, the film follows an Interpol agent and an assistant district attorney determined to disclose the shady deals of a very powerful bank turned expert on illegal activities to fund terrorism and war.

Director Tom Tykwer speaks:”If the story seems to be ripped from the headlines, it’s because the headlines have shown that the banks control all aspects of our lives. The mess we’re in now started when the banks took advantage of people and encouraged them to live beyond their means ‘. 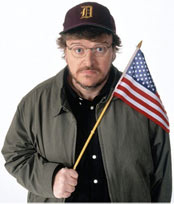 A similar concern has led the controversial and always unerring director of Farenheit 9/11 and Sicko to revisit a subject he had already brought to the fore in 1989 with Roger and Me, when he dug for the reasons why General Motors closed several auto plants in Michigan. A decade later, Michael Moore strikes again, but unlike his fellow filmmakers, with a documentary film, his favorite genre.

As usual, Moore decided to make inquiries into the root cause of the economic chaos lashing against our planet. To that end, he used his webpage to urge a few brave people who work on Wall Street or in the financial industry to come forward and share with me what they know», and adding: «Be a hero and help me expose the biggest swindle in American history”.

To the author of Oscar-winning Bowling for Columbine (2003) it is plain that “the wealthy, at some point, decided they didn’t have enough wealth. They wanted more… a lot more. So they systematically set about to fleece the American people out of their hard-earned money. Now, why would they do this? That’s what I seek to discover in this movie”, he explains.

As we wait for the famous filmmaker to delve into this issue, the economic and financial crisis keeps lashing at the entertainment industry, and of course, cinema is not an exception.

No getting out of this one

A most noticeable effect of this crisis, at least to those who are all gung-ho on whatever celebrity walks down the red carpet, is the lack of glamour in the world’s greatest movie festivals, an extravaganza the average mortal won’t give two hoots about but certainly a sign of how drastic the limitations have got to be, even in Cannes, one of the industry’s two biggest markets. Credit lines have decreased so much worldwide that smaller industries are no longer able to attract a sizeable audience –as it happens to Cuba and most independent film companies– to these contests, also affected by a reduction in the number of sales contract signed for the movies, TV, DVD and their by-products. Since the to-ing and fro-ing of 35-mm film has become so expensive, from now on it will be harder for filmmakers and actors to attend the premieres of their motion pictures, and more DVD releases are likely to hit the stalls.

Things have reached the point that corporate Hollywood, with plenty of stakes in various companies, have turned more conservative and are even having second thoughts about paying the hair-raising salaries their stars pocket –like the 20 million dollars Jim Carrey made for The Cable Guy, in the end a real turnoff– or keeping the affluent lifestyle they demand while on set, say, private jets close at hand.

Now the studios are “walking a tightrope”, what with the undeniable difficulties to get credits, the fear of recession, and the little confidence they have in Wall Street, which explains why more than a few finished movies ended up on ice until the thunderclouds get away –including eagerly awaited titles like the latest Harry Potter installment– often because of a budget too low to cover the hundreds of millions of dollars needed for marketing and advertising campaigns alone.

The DVD divisions seem to be the only ones expected to “gain” something from this mess, because people choose to watch films at home rather than pay for a theater ticket –as an average, 3.50 dollars in Mexico, and over 4.50 in Brazil and Chile. Facts: audience ratings fell 10% in Asia, 14% in the United States, and 1% in the European Union (figures for the end of 2008 have it that more than 9 million people stopped going to the movies compared with the previous year, which meant the closure of 39 theaters).

Nonetheless, filmmakers such as the Argentinean Luis Puenzo (The Official Story, Old Gringo) believe the economic crisis “may blaze a trail that the less powerful countries can use to disseminate their motion pictures more. Despite the hard times worldwide cinema is going through, shaking the system a little bit always leaves gaps through which we can slip, used as we are to dealing with lower costs of production than the big Hollywood companies. My generation was born in mid-crisis and is trained to make films regardless of the financial ups and downs”.

Life has proved Puenzo right up to a point, but the crux of the matter remains that the «peripheral» industries can truly make movies, taking into account that the studios have been compelled to make budget cuts and put off some productions for next year, as they have less money for distribution.

For instance, that’s the case of the Cuban Film Institute (ICAIC),  which was forced to postpone the shooting of feature films that were almost ready to begin after two years of a steady pace that gave us movies like Los dioses rotos, El cuerno de la abundancia, Omertá, Ciudad en rojo and La anunciación.

For the time being, the moviegoers’ greatest hope is that only those films supported by good scripts will get the go-ahead and the budget they need, at least while the crisis still goes on.

4 years ago Juventud Rebeldemovies, US Society35
Auto-eroticism in both directionsThe tax that is not always paid