Home #MeToo at the Basel Fair

#MeToo at the Basel Fair 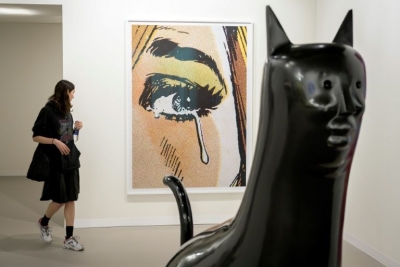 A work of art by Anne Collier titled “Woman Crying (Comic) #7”, with another by Nicolas Party titled “Big Cat” (right) on display at the Basel Art Fair, the largest in the world.

The #MeToo movement that exploded worldwide in late 2017 inspires several works on display this year at the Basel Art Fair, the largest in the world.

Visitors discover inflatable mannequins in white airbag dresses created to protect women from harassment in the workplace, and details of alleged sexual crimes of some 170 public figures displayed on four long walls dotted with red.

Women artists are at the center of the scene of this 50th edition, with their works and in-your-face installations expressing the anger and exasperation of persistent gender inequalities and the abuses and harassment condemned by society.

The Spaniard Alicia Framis has filled a room with delicate white mannequins with dresses made of airbag material, which are activated to protect different parts of the female body.

The work entitled “Life Dress” consists of dresses to “protect women in all work situations where there is some kind of abuse,” Framis told AFP.

The 52-year-old artist said she spoke with victims of harassment and abuse and her stories inspired the design, using “fashion to protest against violence.

It consists of photographic prints with red backgrounds, each mentioning the name and trade of the public figure accused of sexual harassment or abuse, her public response to the accusations, and details of the case.

U.S. President Donald Trump also appears in the work, as do his predecessors Bill Clinton and George Bush senior, two Supreme Court justices, actors, journalists and musicians, among others.

“I think the #MeToo movement is perhaps one of the most important feminist movements of my life,” Bowers told AFP, referring to his inspiration for the play.

Bowers, 54, who presents herself as a feminist activist artist, said she was shocked to realize “what it was like growing up for me in that culture of rape where young men were allowed to sexually rape me and my friends.

With the #MeToo movement, this kind of behavior is finally “being recognized,” she said. “I hope it’s a historic change.

During the premiere earlier in the week, many men stopped in front of the work that covers two wide walls, on both sides, in the middle of the fair’s large exhibition space.

“You can see a lot of men standing here and a little insecure about how to react,” said Vanja Oberhoff, a young German art investor. “It’s a very powerful work,” he told AFP.

But not all reactions are positive.

Helen Donahue, who in 2017 tweet photographs of her body with marks for alleged abuse by independent columnist Michael Hafford, expressed indignation that Bowers used one of her images.

“It’s great that my damn photos and trauma are headed to the Basel fair. Thank you for exploiting us for the +arte+ ANDREA BOWERS,” he tweet Thursday.

Bowers, who insists on the importance of trusting survivors, quickly issued an apology for not asking Donahue’s permission before using the photo and removed the panel from his exhibit.