Masterfully conducted by Doctor in Historical Sciences Julio César González Pagés and directed by Yolanda Cabrales, a new proposal of Cubavisión channel has already put on the table two topics that generate a range of opinions: machismo and feminism. 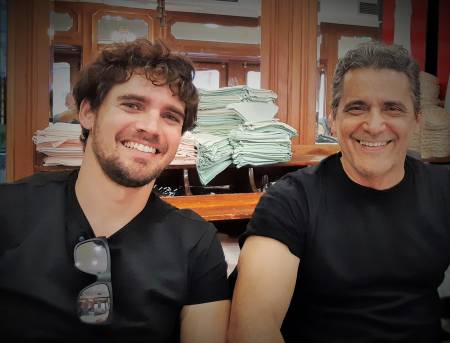 Julio César González Pagés (right) with Yonnier Angulo, who is in charge of the Men in Tangles section. Autor: Juventud Rebelde Publicado: 09/03/2021 | 09:16 pm

The enigma of femininity has made men of all times cavillers. [quibblers] —Sigmund Freud

One more step forward in the effort to build a more humane society, a victory for those of us who work and dream for a better world, represents the program Cosas de hombres [Men’s Things] which has been broadcast every Monday for the past two weeks at 10:15 p.m. on Cubavisión channel.

Masterfully conducted by Doctor in Historical Sciences Julio César González Pagés and directed by Yolanda Cabrales, the new proposal has already put on the table two topics that generate plurality of criteria: machismo and feminism. What is it? Are we or are we not?

The guests represent a wide range of professions and activities that relate male behaviors in different social spheres. Víctor Fowler (writer), Rochy Ameneiro (singer), Omar Franco (actor), David Blanco (singer), Norma Vasallo (university professor), Andrea Doimeadiós (actress) and Marilyn Solaya (filmmaker) have spoken with Pagés so far; all of them very committed to the struggle for egalitarian spaces where men and women have the same opportunities and are valued as human beings, regardless of sex.

Dr. Pagés, leader of the Ibero-American and African Network of Masculinities (RIAM) and author of more than a dozen titles (Macho, varón, masculino and Por andar vestida de hombre, among others), says that “the idea came up in 2013 during a visit of director Yolanda Cabrales to my house.

“She had directed Ecos de mujer and wanted to create a space where men were the protagonists. In 2020 Rafael Pérez Insua, director of Cubavisión, called on us to rethink the project. With COVID-19 we had to look for alternatives. The original idea underwent changes, but gained nuances for discussion.”

-We will discuss health, paternity, sexuality, violence… There will be 13 segments with a duration of 27 minutes, divided into four parts , with three guests and a section called Tangled Men, which is coordinated by Yonnier Angulo and addresses the impact of social networks on contemporary life and masculinities.

-One of the big obstacles is that women’s demands have been resisted by men who do not see them as a priority. A change of vision from hegemonic masculinities is to give them the prominent place in the effort to end inequalities in order to achieve a more equitable society.

“Revolutionary experiences have taught us that the inequalities suffered by women do not end with the end of capitalism, because there are men who are still interested in maintaining the subordination of women.

“Understanding the issue is complicated when a sector suggests that these demands can divert us from more urgent or important objectives at the national level or consider them sectoral demands, and believe that we can create the bonds of solidarity necessary to transform society without questioning male supremacy.

“More than defending men, it is about knowing [mens’] vulnerabilities and prioritizing an agenda that deconstructs the myths of [male] supremacy. We must first and foremost learn to be full humans in order to live in harmony and not be the source of so much violence and destruction.”

-Is it a good time for a program of this kind?

-Yes, it comes at an excellent time of changes in Cuban society. Laws related to our masculinities are being passed and it is important to be prepared for this. There is a great need to educate the population on the various questions related to masculinities and to offer ways to unlearn toxic macho values.