When Trump won the elections for the U.S. presidency in November 2016, Diario de Cuba was among the media outlets that broadcast a video where several Cuban “opponents” show their euphoria over that “resounding victory” 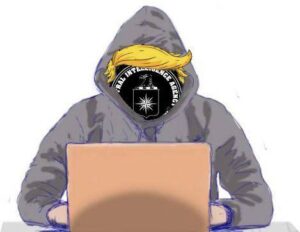 On the same day that the declarations of Presidents Raul Castro and Barack Obama were made public, announcing a path towards normalization between the United States and the uncomfortable neighbor located 90 miles from the Florida peninsula, the website Diario de Cuba published false news about the [supposed]  sinking, by the Cuban government, of a ship in the bay of Matanzas.

Dozens of people who were emigrating to the U.S. were supposed to have died. In the midst of the announcement made by both presidents, the main information of that day, the “news” of Diario de Cuba passed without pain or glory to the history of falsehoods fabricated by a publication that, since its origin, has received several million dollars from the National Endowment for Democracy (NED) for propaganda against the Cuban government.

The NED’s web page contains these figures, and the most recent one, published there, establishes the allocation for 2019 at $600,000. The nefarious role of the NED is not communist propaganda, even the not at all leftist newspaper The New York Times has established its condition as a screen for the CIA and its involvement in the financing of coups d’état in dozens of countries.

When Trump won the elections for the U.S. presidency in November 2016, Diario de Cuba was among the media that disseminated a video where several Cuban “opponents” show their euphoria for that “resounding victory”. Their words are eloquent:

(Trump) The man we need to get out of this whole situation (in Cuba).

We dragged all the communists with us.

In Cuba, almost all the people who suffer the consequences of the regime are happy (with Trump’s victory).

Women have suffered a lot during these two years of the reestablishment of relations between the U.S. and Cuba.

Obama, you are finally leaving.

It was very frustrating to see how the Obama administration was allowing the regime to gain space and leave the Cuban people and their demands aside.

We cannot do it alone (decide Cuba’s fate).

President Obama’s legacy regarding Cuba is not positive.

With the election of Trump, hopes are reborn in those who had lost them.

(With) the arrival of Trump to the White House we can rescue that ally we always had in the struggle for freedom in Cuba.

There is a magnificent juncture for all democratic actors in the region to have a unique triumph, which is to finally and totally overthrow the military dictatorship of the Castro brothers.

Now we have to work with those political actors who are thinking about a real democratization of Cuba.

Congratulations from the bottom of my heart, and I say it with total joy, to the Cuban-American congressmen who are doing so much for the freedom of the Cuban people, I love you, I love you all so that you know and continue as you are going.

Such a background of the media, represented by one who wielded a cell phone in the face of the head of the Cuban Ministry of Culture, is a thing of no importance. Together with the correspondent, is shouting in his support someone who, against what he calls “pacification”. He has published in his social networks the need for a more economic blockade and a military intervention against Cuba. This is something that should not fail to be taken into account, because, more important is the way in which the Minister prevented the one paid by the NED from fulfilling his task: to weaken the Cuban position in any process of changing U.S. policy towards Havana, something Diario de Cuba has not ceased to advocate.

Those who say that a minister does not act like that in other countries are right. True: it is the police who “dialogues” -with clubs and water jets- against anyone who protests. Ultimately, it would be an escort who would undiplomatically put an end to any object unexpectedly placed in front of authority.

What would happen if the provocateur is paid by an agency historically associated with the efforts of a foreign government to change the current order in that country? One does not have to be very imaginative to imagine it, especially when every year journalists are murdered in double digits in the “democracies” around us.

That the libertarian correspondent insults, with all the repertoire of foul words in the Spanish language, the Minister that the private media system financed from abroad against Cuba has tried to lynch in the media, is not important either, much less if we take into account that, for this type of behavior, more than one rapper was sentenced to jail where Diario de Cuba has its headquarters: democratic Spain.

It is not very original either. The authorship of the insults belongs to another person who, in the 2016 video we mentioned before, was happy about the triumph of Trump and the anti-Cuban congressmen in Florida, exhibiting the emblem of the mercenary brigade 2506, defeated in Playa Girón, and requesting a tough hand with Cuba, precisely the one who expressed the tolerant phrase “We dragged all the communists”.

The correspondent of another media paid from the United States (ADN Cuba) acknowledges having received between $150 and $200 dollars for reporting from the Ministry of Culture on January 27, another unimportant thing.

This is who defends the model of free, democratic and independent press that Cuba must implement, nothing more: the yellow journalism that puts the superfluous in the foreground and hides the essential. Why be its unwitting victims, or worse, its accomplices, when what is really being demanded is not freedom of expression, but freedom for insults and lies turned into a business with foreign money?

1 year ago Granmamedia, propaganda0
To breastfeed is to loveThe Challenge of Breastfeeding in Cuba