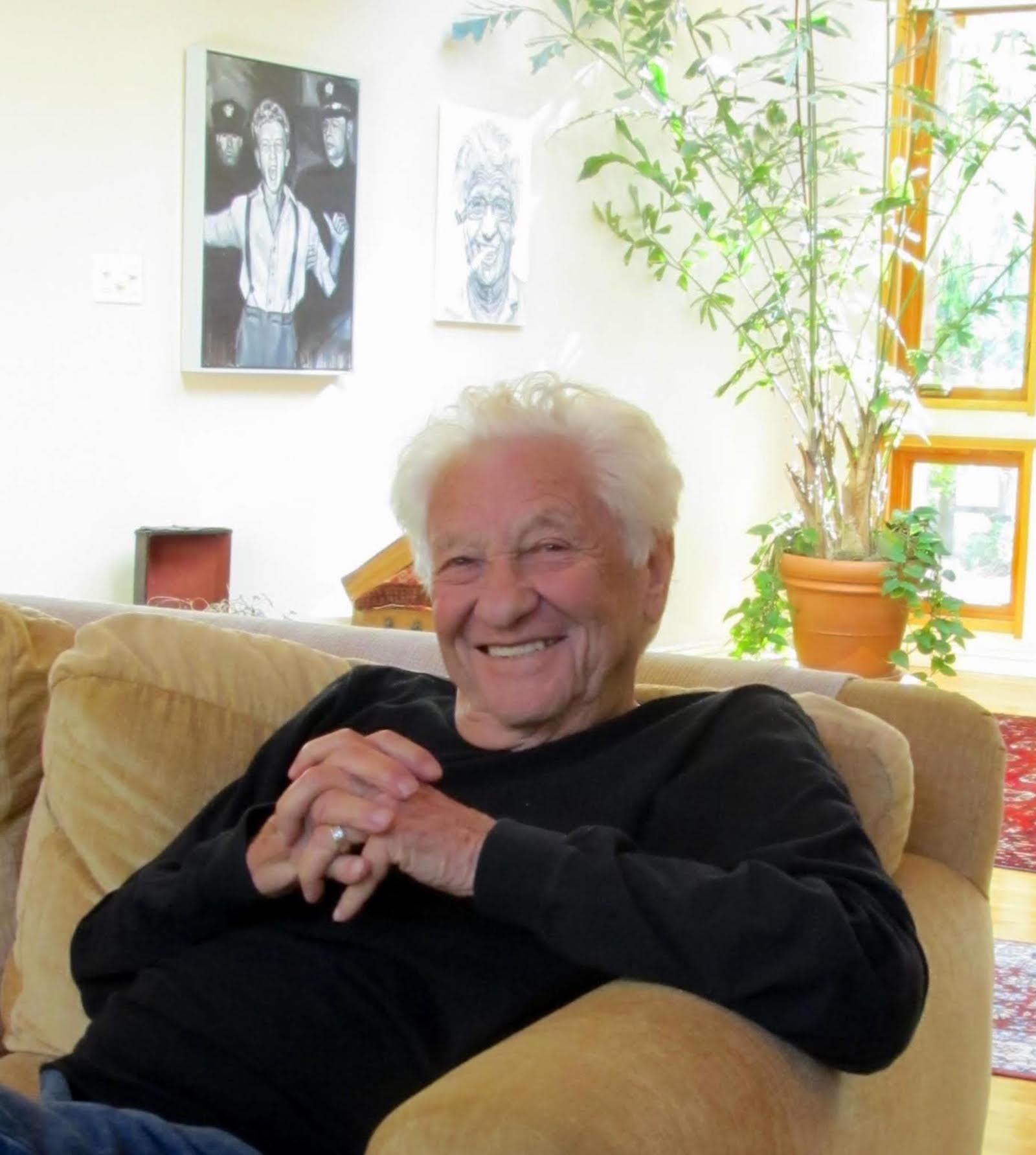 Photo by Edmon J. Rodman
To his grand and great-grand-children, Leo Frumkin was the funniest man on the planet. With sparkling blue eyes and a full head of silver hair, he told jokes that made them giggle with glee, up until weeks before his death. With a natural ease and a smile that would light the room, he lived his life dedicated to creating a more just, equitable and sustainable world for them, his entire family, and for the world.
Leo was born in East Los Angeles on August 4, 1928 and died June 23rd, just shy of his 94th birthday. Throughout his long life, he was a powerful and highly effective force for peace and social justice. Leo was greatly influenced by his older sisters and brothers-in-law, all of whom were members of a socialist organization, and by the multi-racial and multi-ethnic communities of Boyle Heights and Belvedere where he grew up. As a high school student, he formed a socialist youth group, and while a senior at Roosevelt High School, helped organize and lead a student strike to protest an appearance by the fascist agitator, Gerald L.K. Smith. He was arrested along with other student activists, and a November 2, 1945 photo of him in the Los Angeles Examiner was inspiration for a painting of that moment which became a focal point of the home in Tarzana he shared for 45 years with his wife, Sherry and their two daughters.
At 19, Leo was elected president of a UAW Local, the youngest person at that time ever to hold that position. During the Korean War, he became a merchant seaman, but was drafted off a ship into the U.S. Army. Just as promptly, he was thrown out of the Army because of his socialist political beliefs and outspoken opposition to the war. The Army later reversed itself and issued him an honorable discharge. With GI Bill benefits, he studied radio at LA City College.  His deep, resonant voice landed him a job as a disc jockey at a Burbank radio station where he used the name Lee Davis. The station insisted Frumkin sounded too Jewish. However, his brief radio career was cut short when he refused to cross a picket line set up by the station’s engineers who were trying to form a union. Once again, his political sympathies landed him on a blacklist. At the height of the McCarthy period, Leo became the chairperson of the Wendell Phillips Academic Freedom Committee which led a successful public campaign to reinstate the Fullerton Junior College instructor who had been fired for refusing to “name names.” Leo was a founding member of the Fair Play for Cuba Committee and helped organize and defend the massive mobilizations against the war in Vietnam.
With help from the ACLU, in hundreds of pages of files obtained through the Freedom of Information Act, Leo later learned that the FBI had been following him for years, bumbling in their efforts to have him arrested for belonging  to an organization on the Attorney General’s List (at its peak the list contained 90 organizations considered “subversive” which included everyone from the Quakers to socialist  and communist groups) going so far as tailing him to Little League games he  coached for his son.
Screened out of the merchant marines, kicked out of the Army and blacklisted from radio, he worked for and then founded a successful automotive parts business which he ran for 41 years. Vowing not to sell to the highest bidder, he settled for a lesser price from a buyer who would guarantee all the 70 plus employees would retain their jobs, and retired at age 84.
Although he was greatly disheartened by the rightward shift in the United States, he always held out hope, cheering on the youth who poured into the streets in the wake of the George Floyd and Breonna Taylor killings. He only half joked that his headstone should read, “I tried.”
In addition to his wife Sherry, Leo is survived by his children, Sally Frumkin, Mark Frumkin, daughter-in-law Julie Frumkin, Alisa Kinori, son-in-law Gilad Kinori, Syndee Frumkin and her partner Marcus Floyd, grand children Aaron, Gloria, Mayira, Ziv, Shoshana, Kai and Cyrus, great-grandchildren Courtney,  Quetzalli, Keely and Salvador, great-great granddaughter Ava, nieces and nephews, and life-long friends.
In lieu of flowers, the family requests a donation to the ACLU, Death Penalty Focus, Planned Parenthood, HIAS, Greenpeace, or any progressive organization that supports efforts to make this a better world for all.

A memorial will be announced at a later date.