Home The United States and its return to darkness 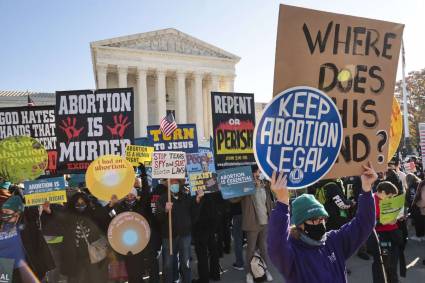 A divided society: this is how they demonstrated last December in front of the Supreme Court for and against abortion. Autor: AFP Publicado: 02/07/2022 | 09:38 pm

In the 1950s, in my neighborhood in Vedado, where apartment buildings and some residences for middle-class professionals were being built on barren land and on land occupied by citadels or old houses that were being demolished, a family with two high-rise apartments was the talk of the town when their purpose was “leaked” there.

The doctor who owned the building had his private practice and clinicthere for an exclusive clientele, American ladies who were spending a “vacation on the Caribbean island”, destined to have an abortion, all as discreetly as money allowed, to circumvent the laws of her country, which prohibited that medical practice and as did the laws of Cuba.

The interruption of pregnancy was only declared free and legal in Cuba in 1961. It was a clear and fair vision of the woman’s right to decide about her body and the possibility of doing it without taboos and in a safe way for life. This was put into practice from 1965 in the National Health System. It is said that pregnant women’s mortality due to illegal and unsafe abortions decreased to practically zero.

It was in 1973 that the United States succeeded, after a judicial struggle initiated in 1970, in legalizing abortion when Jane Doe, the pseudonym used by Norma Leah McCorvey, a woman from Dallas, denounced Henry Wade, district attorney of that Texas city, to demand her right to have an abortion – she had two children and her lawyers filed her petition because she had been raped – and the judges of the highest judicial authority in the United States ruled in favor of making abortion a constitutional right.

Nearly two decades later, in 1992, that decision was reaffirmed by the Supreme Court in Planned Parenthood v. Casey in a 5-4 vote. However, the most backward segments of a deeply puritanical society, often associated with religious beliefs, persecuted medical personnel, activists and women alike for the practice of women’s free reproductive rights.

Attacks on clinics, assassinations, and individual threats, were also coupled with judicial persecution. According to data from the National Advocates of Pregnant Women (NAPW), a women’s legal defense organization, since 1973 more than 1,700 women have been imprisoned or detained and prosecuted for the criminalization of pregnancy.

Of course, NAPW is concerned about what may happen from now on, when the Supreme Court overturned the Roe v. Wade ruling, and termination of pregnancy will no longer be a constitutional right, Each of the 50 states of the Union will impose the rules and limits on pregnant women, which translates into 166 million women in the United States being in their hands and unable to make decisions over their bodies and lives.

In this summer of 2022, what was believed for 49 years to be a step forward and definitive, was cut short by the 6-3 decision of the current Supreme Court. It was tailored to the stalest mold and extreme traditionalism of a good part of American society, because President Donald Trump was able to appoint three of the nine judges, tipping the balance in such a way that leaves a legacy of right-wing thinking and decision-making power that will weigh on American society for many years, since the terms of a Supreme Court justice is for life.

Now women who need or want to terminate a pregnancy will have to travel to the “liberal” states where it is allowed or to neighboring countries such as Canada and Mexico, for example, in order to make their own decision. Some commentaries emphasize how the persecution and trials could lead them to prison, even with accusations of murder or manslaughter.

A commentary in The Hill, signed by Liberty Vittert, under the headline “The biggest danger in overturning Roe: your phone could send you to prison,” warned, “You’re scared, you’re alone and you’re pregnant. You can’t keep the baby and you want an abortion. However, the state you live in had a trigger law that automatically made abortion a crime when the Supreme Court overturned Roe v. Wade last week. You decide to have an abortion anyway at a clinic that is still doing it 100 miles from your hometown.

“Now you’ve committed a crime, and the police have a new arsenal of evidence to arrest you at their disposal. Did you use Google Maps or Waze to drive to the clinic? Police can get warrants or subpoenas to get your Apple or Google cell phone location data to see where you went and how long you stayed there. Did you stop using your period-tracking app? Law enforcement can get that data. Did you Google an abortion clinic? Law enforcement can get that data.”

Although hypothetical, not fiction as related, abortion has once again been criminalized and any action linked to it is considered a crime or offense, can be investigated, prosecuted and convicted and since the Supreme Court made its ruling final, “trigger laws” banning the medical procedure have already gone into effect in several states.

Objectively, the Supreme Court’s action has divided the nation, and demonstrations for and against it came face to face in front of the Temple of Justice, a monumental marble edifice whose quarries of provenance almost identify the current ideological makeup of the nine justices: those stones came from Vermont, liberal and politically independent-minded; from Georgia, the state that was the icon of segregation; from Alabama, which continues to recall the black belt of slavery in its cotton fields; from Spain, where Franco’s phalanx drowned a people; and from the fascist Italy of Benito Mussolini, to whom the architect builder thanked for his marble contribution.

A first step on a path of retrogression
This overturning of Roe v. Wade is only the first back-to-the-darkness ruling by the U.S. Supreme Court in a series that will undoubtedly transform the country. The warnings about this retrograde process have been coming ever since Trump began appointing conservative justices and upsetting the balance.

Already, New York Democratic Rep. Carolyn Maloney, chair of the House Oversight and Reform Committee has scheduled a July 13 hearing on the impact of the reversal of Roe v. Wade, which she called having “devastating effects” for generations. She sees it as the culmination of a years-long public campaign by Republicans to appoint a Supreme Court that would uphold draconian restrictions on people’s reproductive health care.

Naomi Klein, a leading scholar and environmentalist, asserted in an article in The Intercept that the United States is in the midst of a “shock-and-awe judicial coup,” a military term for a surprise and frightening attack that allows for quick victory over an adversary that has been terrorized by the power of force, in this case by the force of power. We cannot ignore the fact that a Supreme Court decision is not subject to appeal.

To the blow to abortion rights, Klein added the blow to gun control laws and the authority of the federal government’s Environmental Protection Agency to regulate greenhouse gas emissions from the use of fossil fuels, to the benefit of exploitative corporations, even to the detriment of the sovereignty of indigenous nations in the U.S.

It is not new and her warning that can be read in her major study The Shock Doctrine: The Rise of Disaster Capitalism [In its Cuban edition: “La Doctrina del Shock: El auge del capitalismo del desastre”, published in Cuba by Editorial de Ciencias Sociales, 2016.] On the Supreme Court’s docket there are other issues of impact, even affecting democracy itself, the right to vote, the redrawing of electoral districts and these judges do not seem to be precisely neutral….

It is clear that American democracy is deteriorating and on the part of the Supreme Court, the process is underway. There will still be much to tell and to analyze.