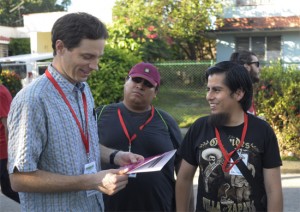 At only 20 years of age, Jacob Perasso witnessed how US policemen killed a worker very near to him. Since then he lead the struggle of young workers in his country and has strengthened his links with the largest island in the Antilles, whose reality he disseminates every minute.

The language barrier did not become an issue. He speaks almost perfect Spanish that might confuse those who hear him, with his very white skin, blue eyes and his portrait of the capitalist crisis. One may think that he was born in any country except where he lives, works, dreams, suffers the injustices of the system, and leads the struggle of young workers: the United States of America

I met Jacob Perasso while walking the corridors of the Conventions Palace in Havana, one of the venues of the 19th General Assembly of the World Federation of Democratic Youth (WFDY). We talked on the first day of the event and then we made an appointment to have this dialogue –which was finally done via email. The young man shared experiences and emotions arising from his links with Cuba.

A representative of the Socialist Youth and the Socialist Workers Party in his country, Jacob first came to Cuba in 1996. He was 20 years old. At that time he saw policemen in the US kill a worker very near to him. “The man had no weapons; 12 policemen beat him in the head to death and we had a demonstration in my neighborhood to bring them to jail.”

“I began my struggle against police brutality. Someone told me that in Cuba people are not treated like that. Shortly after, I was invited to participate in an exchange between youth organizations and I became very interested in knowing how everything was. So I found the socialist movement; I saw that a different world is possible and that there is a possibility of changing the values of human beings through a revolutionary struggle. Those were my reasons to start defending the Cuban Revolution,” said the young man, who today works as a clerk in the US railroad system.

He tells us that that first visit and the dozen he’s already made have contributed much to his political thinking. “The socialist revolution in Cuba is an example in the struggle against imperialism, because the people have withstood many years of attacks by the capitalist class of the country where I live. Your ability to fight and win is a sign of the awareness that people on this planet should have.

“Therefore, when I return to my country I report on that reality, the one that the mass media conceals. In addition, I continue the process of building an organization that is able to represent our interests and lead the struggle within the United States. Cuba’s example gives us the proof –along with the 1917 Bolshevik Revolution in Russia– that it is possible to reorganize society with a government that meets the needs of the working class.”

Believing in their innocence

Jacob was a constant participant in the struggle for the return of the Five. He says that he always believed they were innocent and more so when he investigated the case, knowing that Gerardo, Ramón, Antonio, Fernando and René “infiltrated terrorist organizations to prevent the danger not only to their nation but to my own also, and that is a lawful act for any patriot.”

He thus strengthened the struggle within the United States and organized activities where he spoke with workers, youth and other sectors about the truth of the case. Along with many of his colleagues, he went door-to-door in different neighborhoods, arranged art exhibitions with works of the Five in museums, universities and libraries, and organized open meetings with students so that more people got to know about the case. During this struggle he used the book The Cuban Five and The Militant newspaper, a weekly publication in which he disseminated information on the subject.

“Some of the attacks on the Five are commonly used against our working class in the fight against the system. We explained that the battle for freedom of the Five was also theirs. During their time in prison they won support from other prisoners who are part of the working class in the United States and this was a great motivation. Gradually more people were learning about the case and were willing to take the risks in this battle and are still denouncing injustices.”

The hardest part of the battle

It was explaining why the Five were fighting, why it was so important to defend them and why the working class of the United States should join in that fight. So when we learned of their return to Cuba, I was glad and so were my colleagues. I felt happy, and soon I thought more about the possibility of advancing our work in defense of the Revolution, because the resistance of its people –more than anything else– achieved this victory.

“During this time we have learned a lot from the Five; it’s not for nothing they are called heroes. Their behavior and disinterested support of good causes, not only of their country but also of the world, are evidence of the values that the Revolution has sown in all its children. I am quite sure that if we follow the example in Cuba and the United States, we will win all our battles.”

Recently Cuba and the United States restored diplomatic relations; what is your opinion about this?

“It’s a triumph. Washington had to change its policy, while Cuba did not give in one bit of its principles. However, we have to be alert because their goals have not changed; only the methods. The Democratic and Republican parties agree to create a movement against the Revolution and socialism from within. That is why they have not removed the cruel economic, financial and commercial blockade nor want to return the territory illegally occupied by the US naval base in Guantanamo.”

“We now reinforce these new causes for struggle –which are not new– and disclose the need to stand against these things. We conduct several actions in our country because we know that the US government continues to wage war against Cuba in all areas, though sometimes they try to show otherwise.”

In his college years, Jacob never shared the values that he was being taught in favor of capitalism. Gradually he made up his mind in favor of worthy causes of the world and has strengthened his resolve in the struggles he leads in his workplace for the safety of his fellow workers.

“The railway is an industry in which the ruling class puts its employees and communities in great danger. In recent years we defeated an attempt by the owners to have only one person staffing each train; and today, even though there are still two, we keep up our struggle, because our rights are frequently violated.”

“Our government is the one who least defends the rights of our society; our country is the only one that has used the atomic bomb and who continues to ravage mankind with its killing machine. For them it would be better that we did not exist and that is unforgivable. There is no comparison with your Revolution which spreads love all over the world, supporting revolutionary movements and fighting for the rights of the oppressed. That’s why I love Cuba.”

“In Cuba, life is not easy, but the mentality of the human being is different. We do not have, for example, fundamental safeguards such as health, sports, education and culture, or doctors who want to go to Africa to fight Ebola, as you did. In my country, there is no solidarity among people and many times you do not have the chance to know these things. It is important that you preserve your history and let everyone know what the Cuban people have lived through.”

How do you manage to be a militant in a country where very few defend socialist ideas?

The United States is also a nation with history; we have a tradition of struggle. We face many difficulties when we want to explain the perspective of a socialist revolution. Luckily, at present we function as a legally established organization; and the support by many people is our greatest defense against the government. The difference between Cuba and the United States is that our country stands for the ruling class; the capitalists. Here you defend the workers: the people.

“In recent years the class struggle in the United States has deepened and millions of workers have begun to resist the effects of the capitalist economic downturn. Some begin to think more about the political rights we need to fight for, and see that capitalism has no future. In that context the interest in Cuba has grown as an example of a different alternative.”

“Most of the working class is interested in knowing what the Revolution is; and young Americans have the courage and the wish to help, to learn about everything, because for them, the largest of the Antilles is a reference point you have to look at in the middle of the crisis of capitalism. That is why our responsibility is to explain the reality of the Cuban revolution and defend its cause.”

“In this regard, for many years we have had good relations with the Union of Young Communists, and we work together on exchanges around the World Youth and Student Festivals. Young Cubans must meet the challenge of preserving socialism forever, to confront the pressure of the capitalist world, where the entire system –from education to the laws, courts and police– aim to isolate each individual and each family.”

Jacob is a young man who loves the arts, films, photography and jazz. Occasionally he is seen playing tennis and swimming –two sports that he likes a lot– as well as reading. Perhaps that is why he said he is eager to participate in the Cuban International Book Fair, since “it is a pleasure to experience that cultural event of the Revolution, where people have access to thousands of titles, to meet writers and intellectuals in order to enhance their knowledge.”

What do you admire most in our country? I ask the young man, and almost without letting me finish he responds: “Its conviction, serenity, deep trust in its leaders and in the revolutionary process. I love its people and their hospitality.”

Yo amo a Cuba