It is necessary to close every gap where the new coronavirus enters, almost always accompanied by indolence, insensitivity and carelessness. 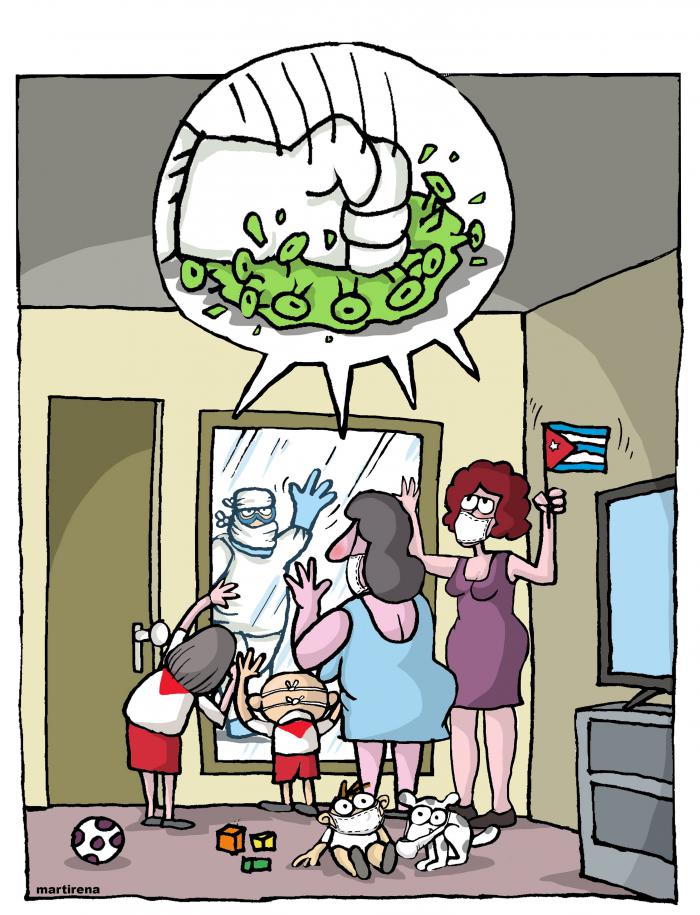 In a farewell celebration in Limpios Grandes, a community of a little more than 200 inhabitants belonging to the territory of Florencia, a traveler from the United States did not imagine that he would leave such a sad mark when, in the second half of March, he returned to his country of origin. There there were several people left infected with the new coronavirus, a figure that today reaches 17 patients, starting with case zero: a young woman who was only 18 years of age confirmed as positive on April 2.

The girl had close ties with the visitor and in turn with relatives in the community, which is why six of those confirmed live here, including some children. Another five confirmed cases are from the Florencia headwaters, allegedly infected at a family party she attended.

The value of the constructive criticism made by President Miguel Díaz-Canel Bermúdez at the meeting to follow up on the plan approved by the Cuban Government for the prevention and control of the new coronavirus on the island is based on the purpose of achieving a favorable change that will benefit each and every one of the people, whether or not they are involved in the current pandemic that is sweeping Cuba.

Without half-measures, he emphasized that “we still have to criticize those who are still reluctant to abide by the discipline necessary to keep the curve of the disease as flat as possible.

“This is not a request,” he said, “it is an obligation that we must assume with citizen responsibility and that must help us fulfill our institutions of internal order that are deployed, along with their people, in these difficult days.

“Life is telling us that, when someone hides information about their health status, we can mourn the loss of a life and we can mourn other lives that are put at risk.

In the face of the new coronavirus, there are no crossed arms in Ciego de Avila. Evaristo González Camacho, provincial director of the Integral Direction of Supervision, confirms figures: 3,727 inspections carried out, 1,862 fines imposed in the amount of 794,165 pesos; 813 warnings and 22 licenses to practice self-employment withdrawn (basically related to price violation).

The Provincial Prosecutor’s Office, for its part, had filed 20 cases as of 2 April, 11 of which were prosecuted as crimes of spreading epidemics, punishable under article 187 of the Criminal Code. These were generally persons who had violated the need for isolation, an extremely irresponsible behavior.

In addition, more than 327,000 investigations are carried out every day by medical and dental students, together with doctors, family nurses and political and mass organizations. “Now the important thing is to go deeper into the quality of the research,” Dr. Osvaldo Ivañez, provincial director of health, said at a press conference.

However, gaps exist. There is still a need to denounce in a timely manner the inappropriate conduct of the people, the people’s council and the on the block, because everything cannot be left to the forces of MININT.

It is necessary to act more rigorously in confronting the illegalities and behaviors that in the midst of the pandemic put people’s lives at risk; a call that the country’s highest leadership never tires of making.

Two people from Ciego de Avila died from sars-CoV-2, in the popular council of Florencia with a local transmission event, as well as the town of Turiguanó, 88 people in the isolation centers and figures with a tendency to grow in several municipalities. These, set off the alarms in the province, located among those with the most diagnosed cases (48) in the country.

It is necessary to close any gap where the new coronavirus enters, almost always accompanied by indolence, insensitivity and lack of concern.

2 years ago GranmaCovid-19, Social Indiscipline0
Immunization, But Not Just Against the VirusCoronavirus and Cuba: A Devastating Impact