If the media attack under which Cuba is living these days is unprecedented in its scope, due to the technological potential of the adversaries and their growing concerted actions from various geographical points, it is not strange either, because the country has always been in the trenches of a psychological warfare. 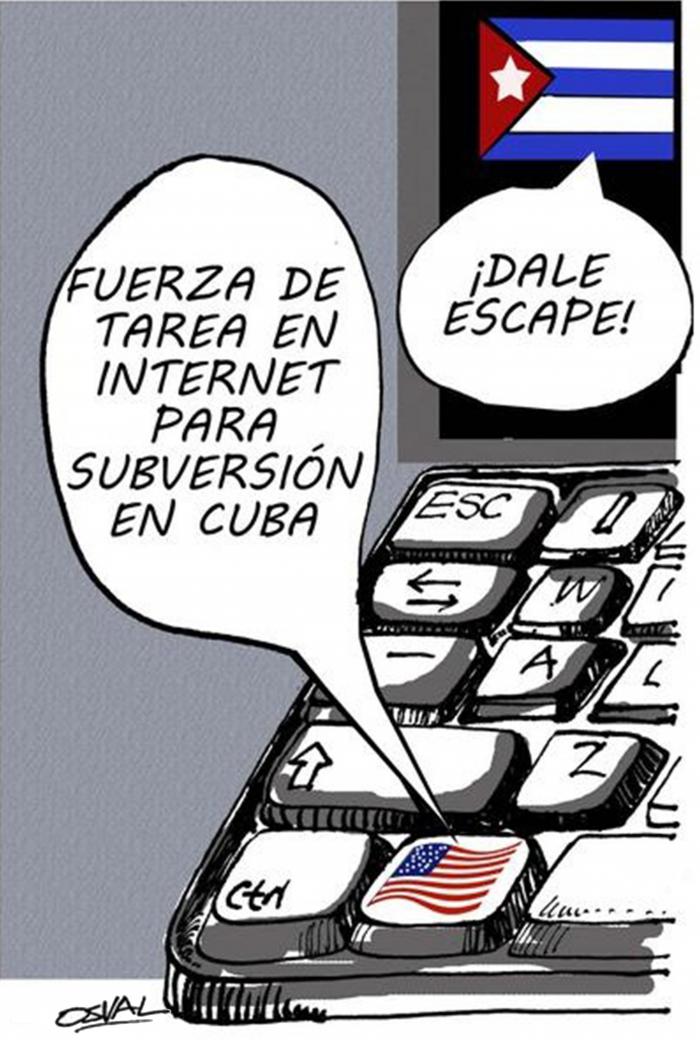 Leaflets in which the Commander in Chief Fidel Castro, with suitcases and gold in his hands, escaped from Cuba in a sinking ship, were prepared and printed in 1962 by specialists in psychological warfare of the United States Army. Although they were not used in the end, because other experts considered them counterproductive at the time, they were part of the arsenal of propaganda resources planned to support the military invasion that the government of the North American nation included in the response options during the so-called Missile Crisis.

A few hours after the recent riots, which were undoubtedly orchestrated from abroad, a Twitter “user” posted that Raul Castro had fled to Venezuela, and the note went “viral”. It did not matter that the photo of the tweet was taken in 2015, when the then-Cuban President arrived in San José, Costa Rica, to attend a Summit of the Community of Latin American and Caribbean States.

Its purpose was to contribute to fix the opinion matrix around a chaos originated by a “legitimate national uprising” against the Cuban government, due to the mismanagement of the pandemic and the lack of medicines, food and electricity.

If the media attack under which Cuba is living these days is unprecedented in its scope, due to the technological potential of the adversaries and their growing concerted actions from various geographical points, it is not strange either, because the country has always been in the trenches of a psychological war.

The example of the drawings that had Fidel as a target of disinformation appears in the book De la octavilla a la sicotecnología, by Emiliano Lima Mesa and Mercedes Cardoso, scholars of the psychological warfare procedures used by the United States in the preparation and development of armed conflicts.

Both researchers say that Cuba has suffered the largest and most prolonged psychological warfare ever carried out by the United States against any country. “It has involved both psychological and propaganda actions and has manifested itself in the economic blockade, support for mercenary gangs, biological warfare, military aggressions, sabotage and assassination attempts on the main leaders, to cite just a few examples,” they write.

In making specifics on the propagandistic level, they state that it has manifested itself in newspapers, books, posters, flyers, rumors and radio and television broadcasts to spread lies and slander against the Revolution.

The referenced book is indispensable to learn the details of the persistent and sinister behavior of the U.S. intelligence apparatus, whose purpose is subverting the social order in our country. Perhaps, in a new edition, in the chapter Against Cuba, the media misdeeds of the social networks in the Internet era should be included. The work was published in 2003 and, since then, the adversarial struggle against the Cuban Revolution has had the Internet as one of its main scenarios.

It is fair to recall that, in this same newspaper, colleague Raúl Antonio Capote wrote that as of 2007, the CIA considered it a matter of prime importance to guarantee access to the Internet in Cuba. The nefarious agency’s idea was to use the illegal networks created on the island at that time, for which they evaluated the possibility of connecting them to digital television, which would be the possible means of access to the network of networks.

The promoters of the program, Capote pointed out, ordered to put in Cuban territory ten BGAN (Broadband Global Area Network) equipments. “One was given to a CIA agent in Havana to send daily, in a secure way, information on the capacity of MININT and Mincom to detect illegal satellite TV connection antennas. They also required information on movements of FAR troops in certain regions of the country, and characterization of leaders and cadres of the Revolution”.

In the route that led to the riots of last July 11, there are many other traces of U.S. intelligence agencies and entities created by them to act against Cuba. Thus, among the most recent are the events of San Isidro and the concentration of young people in front of the Ministry of Culture headquarters in Havana.

Both cases were portrayed as an internal issue, due, among other things, to new currents of thought and dissatisfaction of young intellectuals and artists unable to give free rein to their creative spirit. But when analyzing the causes, if the nonconformity to certain regulations and the superficiality with which some officials act is real, it is impossible to ignore that in the period 2008-2012 the United States Agency for International Development (USAID) sponsored the non-governmental organization (NGO) Creative Associates, which set out to recruit young people belonging to what is identified as Cuban counterculture.

In January 2012, in one of the reports justifying the expenditures, the NGO cited several achievements of its work, including a network of more than 30 independent leaders in all Cuban provinces and the solid establishment of youth and countercultural groups.

Faced with the failure of the immediate objectives they intended with the recent unrest, USAID has responded with a call for more subversion projects in Cuba. The new sum amounts to $2 million dollars, and is being offered for democracy promotion activities. After all, for identical purposes, the agency, along with the National Endowment for Democracy (NED), was a channeling mechanism for much of the $250 million that in the last two decades the U.S. government devoted to undermining socialism in Cuba.

By the way, Samantha Power, the new director of the US Agency for International Development (USAID), is a character to keep an eye on. A former U.S. ambassador in the Obama administration and an expert in diplomacy and climate change issues, she has also stood out for promoting her country’s active intervention in other nations for supposedly humanitarian reasons.

That position is confirmed in an article published by The New York Times, on April 15 of this year, when Lara Jakes exposed details of Samantha Power’s confirmation hearing in the Senate. On that occasion, writes the author, Rand Paul, a Republican senator from Kentucky, asked the official, “Are you willing to admit that the interventions in Libya and Syria that you advocated were a mistake?”

“Power did not,” the journalist said, transcribing her words: “When these situations arise, it’s almost a question of lesser evils; the options are very difficult”.

Could the requests for humanitarian intervention for Cuba made by the same promoters of the vandalism riots be the result of coincidence; the same ones who, in desperation, want to make people believe that chaos reigns in the country?