Home In honor of my friend Ricardo

In honor of my friend Ricardo

IN HONOR OF MY FRIEND RICARDO
by Carlos Alzugaray
May 1, 2022 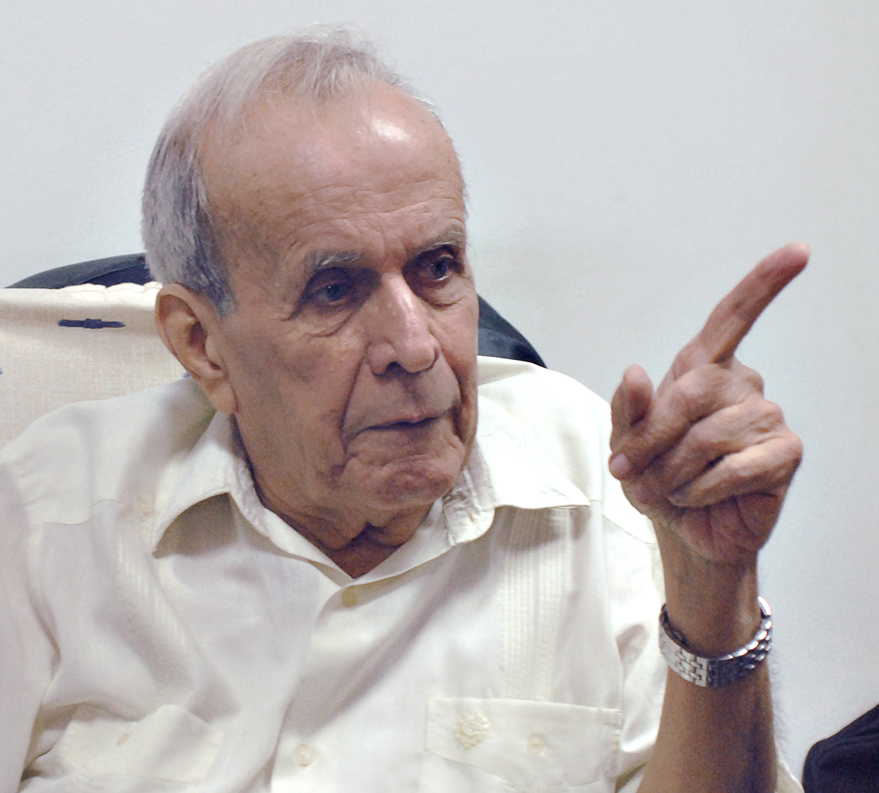 I will never forget his simplicity and modesty. He was a thorough revolutionary, a patriot without blemish, a brilliant diplomat and a politician from another galaxy.

I met Ricardo Alarcón in 1963. I was 20 years old and a young country specialist in MINREX when Raul Roa, our Chancellor of Dignity, recruited a group of FEU leaders who had finished their studies after the triumph of the Revolution due to the closure of the University, to join the Foreign Ministry in different positions. Ricardo entered as Director of Latin America and the Caribbean, but very soon that Directorate merged with the United States and Canada, which was where I worked.

He immediately established a fraternal relationship with the motley group of young and not-so-young people who became his subordinates. As a boss, he was not difficult to get along with. He listened to anyone who had something to say to him. When he had to talk to someone, he didn’t usually call them into his office, he usually went to the workstation of his subordinates and asked what he had to ask right there. He was not satisfied with simple, stereotyped answers. And, very importantly, when a decision had to be made, he would hold large meetings with all of us who could contribute something to the issue in question. Like Roa, he was an enemy of all manifestations of bureaucratism.

I must confess that a very close relationship was established between us, both professionally and personally. Probably because we were both passionate about studying and analyzing American politics. We were and were consciously anti-imperialist, but when we sat down to talk about the United States and its foreign policy we did not do so with stereotypes or slogans.

Ricardo knew how to make constructive criticisms and did not mind at all if you went against him. This made us feel very comfortable working with him.

One thing that impressed me a lot was his simplicity and modesty. Ricardo was not interested in anything material, except a good book and a good cigar. In those early years, even though as Director he would have been assigned a car, he never bothered about it. He would come and go on foot from his home at 21 between N and W. Early in the mornings he would be seen entering the Calzada gate of MINREX with a briefcase full of papers under his arm. Many times when the work was finished he had to be given a bottle.

In 1965 our paths separated and we met again in the late 1970s when he returned from his first mission as Ambassador to the UN and assumed the post of Vice Minister in charge of America. From those times I remember our exchanges on American politics. Although he could have the possibility of ordering his lunch from the dining room to eat it in a pantry that was available for the Vice Ministers on the floor they occupied, Ricardo preferred to go down to the dining room and stand in line like everyone else. He would sit down and eat whatever was on the tray and did not mind at all if others sat at the table he occupied. He always enjoyed a good conversation, especially if it was about politics.

Later, in the short time he was Foreign Minister, he asked me to work with him as an Advisor. In 1992, after a large meeting of the Ministry’s Board of Directors, attended by numerous high-ranking officials, it was decided to undertake a task that then seemed impossible: to get the UN General Assembly to approve a Cuban resolution condemning the U.S. blockade against Cuba and demanding its lifting. This resolution had been presented the previous year when Alarcón was Ambassador to the world body but it had to be withdrawn due to the possibility of losing the vote. Ricardo was not very convinced that this could be achieved and that is why he called that meeting to listen to the opinions of all the Directors. After a long debate, he personally gave the go-ahead to the path that a few of us proposed.

When he made the decision to “take the plunge”, Ricardo asked me to coordinate all the actions from the office. This meant that we were in contact with each other every day at all times.

In that battle, which was one of his greatest diplomatic successes, Ricardo deployed an intense activity full of rigor, intelligence and political will. Every day at the end of the day we had a meeting in which we examined how things were going and decisions were made for the following day. Naturally, although it was always late at night, when the meeting was over, I was left to prepare all the instructions for the Ambassadors and Directors. It should be noted that even if it was after midnight, our Embassies, scattered all over the world, could be starting their working day and could not wait. Ricardo would not leave me alone; he always waited for me to finish what he had to do and we would leave the Ministry together. He didn’t need my “bottle” anymore. And, besides, I lived two blocks away.

The Ministry and its Embassies worked together and we achieved what seemed impossible: the General Assembly approved our draft resolution by 59 votes in favor, 3 against and 79 abstentions. I had the pleasure of giving him the news when he was in his office attending to other matters. Although he was surprised and pleased that the vote in favor was so numerous, he immediately began to analyze what we were going to do with it.

It was a concerted effort in which Ricardo demonstrated the ascendancy he had as Minister and the effectiveness of his strategic thinking.

The New York Times (a newspaper that Ricardo read daily when he worked at the UN) described the lead story in its November 25, 1992 edition as follows:

“The General Assembly delivered an unexpected rebuke to the United States today, overwhelmingly passing a resolution that calls for an end to Washington’s 30-year embargo against Cuba.”

One of the first things he did after learning of the outcome was to hold a press conference at the ICC at 23rd and O, and that’s where we went. What was not our surprise when we found out that when the news broke, many people who worked in the surrounding area congregated on that corner, paralyzed the traffic and applauded him deliriously when he got out of the official Lada. Ricardo did not allow himself to be flattered by this. He reacted with his usual modesty and simplicity. He told me: now you sit next to me. It was the most important moment of my diplomatic career and I lived it next to Ricardo and worked with him.

I have some other anecdotes, but I will have to sit down calmly to write them down. For now, I will summarize as follows:

I will never forget his simplicity and modesty. Ricardo was never overburdened by charges. He was a thorough revolutionary, a patriot without blemish, a brilliant diplomat and a politician from another galaxy.