Home I can explain myself!

I can explain myself!

I can explain myself!

Let me shut up about your silence.
–Pablo Neruda

Have you noticed how many times a man explains to a woman or a girl something she already knows, often in an affected tone? That attitude is a type of micro-machismo that since 2008 is identified with the term “mansplaining” (its literal translation would be “macho-explanation”), and it is a typical [form of] gender violence, a patriarchal mechanism that takes away from the value of the female experience in order to silence it.

It can be an unconscious act, transmitted for centuries through diverse cultural channels. When it is brought to their attention, some revise their attitude and try to unlearn it.

WHEN DOES IT HAPPEN?
It can happen at home, at work or in any public place, to women of any age or social status:

You tell a story and he interrupts you because he thinks he can tell it better, even if it’s an experience of your own.

In a children’s fight, the boy is first asked to explain what happened and is held responsible for what the girl involved does or says.

When you complain about the way they treat you, they ask you if you are ¨on your days¨

Your colleagues reinterpret your ideas to present them as their own, without giving you credit

You are describing something and a man interrupts you to talk about another source ¨más importante¨, without acknowledging your expertise on the subject

In a task of your responsibility, they ask someone of a lower professional level for his judgment because he is a man!

Interrupts with intimidating or arrogant gestures

Explaina in a condescending or professorial tone

Raises his voice to cancel yours

Smile with irony and dismiss your demands for respect

He doesn’t look at you when he talks, he prefers to look at another man

If you criticize him, he establishes a hostile silence

To curb male chauvinism, you must first be aware that not because it’s often right

Let him know that you perceive that attitude as violence, and that even if it’s not intentional, it hurts

Stand firm when speaking, change your tone slightly and raise your voice if necessary so that you are not cut off

Defend your position with firm arguments, without apologizing for having your own viewpoint

If they insist on explaining the obvious to you, ask questions that will show how deep your knowledge is

Support other women when you see them being silenced, both at home and in public spaces 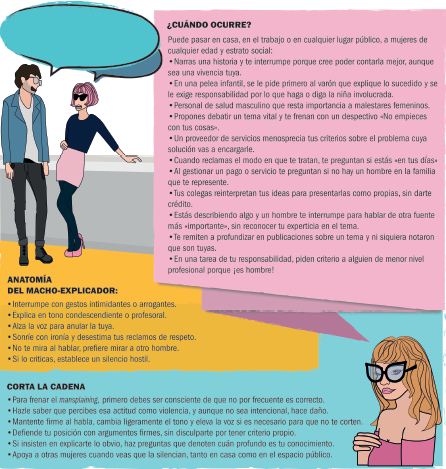