From James Monroe to Marilyn Monroe

From James Monroe to Marilyn Monroe: America for the Americans

American cinema is one of the most powerful weapons of the culture and symbol war that threatens us today.

The industry turned the beautiful blonde Marilyn Monroe into a glamorous sex symbol, an object of collective desire. Photo: MOMA

Rene Greendwald, a veteran CIA official, said in a preparatory meeting for the Genesis project, aimed at the cultural war against Cuba, that they had been more successful in Latin America with Marilyn Monroe than with the Monroe Doctrine. The CIA specialist, who also said that the scenario of a conventional war was well interpreted by the Cubans, whom he believed were capable of facing and defeating any attempt at military occupation, was right, but he always raised the question: And when the enemy is in your living room? How do you identify in a series of your choice, in a film, in a sports programme, in a raeality show or a talk show, an action of the enemy?

American cinema has effectively contributed, on our continent in particular and in the world in general, to the efficient “selling” of the American way of life, to instilling in people’s minds the image of the superiority of Americans, the invincibility of their army and the inferiority of the peoples of the southern hemisphere. It has helped to distort history, to sell us its products, to impose its fashions, its national symbols.

AMERICA FOR THE AMERICANS
The Monroe Doctrine, developed by John Quincy Adams (the sixth President of the United States) in 1823, was part of the annual message of American President James Monroe to Congress. Since its inception, the United States has sought to expand into the American continent “with extraordinary determination of purpose”. Territorial expansion was considered an exclusively internal matter, and not a foreign policy issue, it was the esteemed “Manifest Destiny”.
The phrase “America for Americans” assumed that Americans were North Americans, that is, white, Saxon and Protestant. This mystique justified the extermination of the American Indians, the conquest of the West, the invading war against Mexico and intervention in the process of independence of Spanish and Portuguese America.
The fruits of the Doctrine were not long in coming…., American troops have intervened in Latin America hundreds of times. The empire has imposed dictatorships, occupied lands, threatened governments, snatched territories.
The method used is repeated in history over and over since the conquest of the West: denigrate the opposite, slander, diminish their self-esteem, create and finance opponents, foment internal disturbances, create chaos, and then occupy and if necessary exterminate.

U.S. cinema, in the midst of a process of expansion and development, reached Europe and spread throughout Latin America after the First World War. These were the happy 1920s, which corresponded to the period of economic prosperity in the United States from 1922 to 1929. 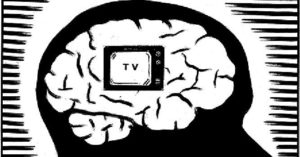 Hollywood cinema is becoming an efficient tool for “Americanizing”, or simply transmitting the values of the American way of life, spreading the stereotypes outlined by psychology in its prestigious universities, to the cultures and ways of being of the people of the rest of the countries of the world.

Hollywood cinema is becoming an efficient tool for “Americanizing”, or simply transmitting the values of the American way of life, spreading the stereotypes outlined by psychology in its prestigious universities, to the cultures and ways of being of the people of the rest of the countries of the world.

The cinema quickly created its own legend, associated with the names of the great stars. A whole legion of stars that dazzled the public. The industry turned the beautiful blonde Marilyn into a glamorous sex symbol, an object of collective desire.
People would go into the large darkened room like a church, sit in front of the screen and Hollywood movies would tell them how to dress, how to behave, how to make men fall in love with women and how to make women love men, how to be a hero. Hollywood established patterns of beauty, pointed out what was right and wrong, who were the good guys and who were the bad guys.
The role of American cinema in the symbolic construction of capitalism has been essential; the promotion and sale of the American way of life had its main manager in the cinema. No other art surpasses the great dream factory in this endeavor.
The United States exports 250 000 hours of programming per year, more than 75% of the world total. American cultural products are the only ones that have a level of distribution that reaches all continents, all countries and almost all languages.
How do we get rid of the Americanization of our habits, tastes, customs and thought? It’s really hard. How do we deprive people of their life-long tastes and practices, syncretized, amalgamated, often substitutes for indigenous ones? Sports, fashion, games, entertainment, language, music, shows, are part of our way of being, of living. How can we give up the way we dress, the TV series we like, the music we listen to, the sports we watch? To all that which gives us pleasure, that we desire when we are crowded into the living room of our house in front of the television, we wait for a while to “distract” ourselves, to rest, to “disconnect”?
The American cultural product or its substitutes, scientifically elaborated, cause pleasure and entertain, and at the same time facilitate not thinking, oversimplify the thought proceses, of analysis of reality; they think for us. They make us live in a reality made according to our desires, or rather, according to the desires sown for years in our unconscious.
The battle begins in the living room of the house: the fun, the glamour, the sentimentality, the action, the sex, the brightness, the drama, the morbid, the ridiculous, the simple.
The examples are countless. The Santa Fe I Document, written in May 1980, provides guidance on the need to engage the Latin American intellectual elite through radio, television, books, articles and brochures, job boards, scholarships, awards and donations.
If we study the documents of Santa Fe I and II and the Initiative for the Americas, we will notice that the success of this strategy depends, according to both, on achieving a change of culture in Latin America in the first place, that is, the success of the Monroe Doctrine depends on the success of Marilyn Monroe (with the pardon of the beautiful actress victim of this system).
Today they are trying to expose the club, while slander, defamation of the contrary, the penetration of the symbols of American power, the club, carrot and perhaps less honey are intensifying to achieve their usual purposes: America for Americans.
Apr 6, 2018Walter Lippmann
Source :
De James Monroe a Marilyn Monroe: América para los americanos