They have commodified the symbol of freedom so much that they don’t even know what it means anymore. But the worst thing is not that. The worst thing is that, consciously or unconsciously, this commodified counterrevolution has become one more “pillar” of socialism in Cuba. Because if the Revolution falls… what the hell are they going to live on? 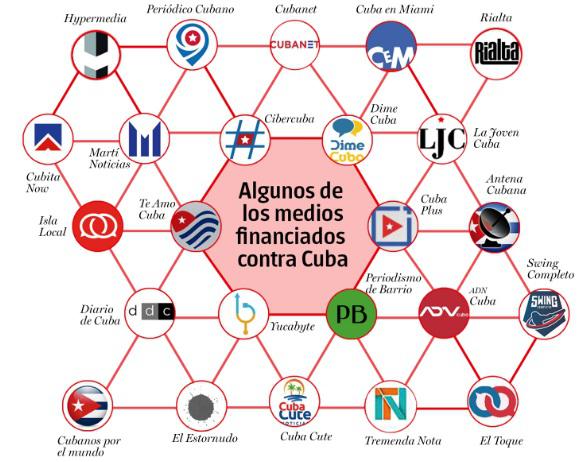 A good capitalist finds everything a profitable business. It is the maxim of the successful bourgeois: make profit. With this liberal logic, let us not doubt it, human civilization has advanced considerably, although this advance has not been homogeneous. It cannot be questioned that leaving behind slavery or vassalage were substantial improvements for humanity as a whole, although there continued to exist (logically) oppressed and oppressors, people who had too little and people who had too much. And people who, even though they had too much, wanted even more.

The champions of capitalism have never ceased in their eagerness to accumulate property and wealth, wrapped in an ideological plot in which they feel themselves owners of land, resources, real estate, other people’s work… But finding as a limit not only the development of the productive forces themselves, but also nature and the real world itself, they sought to make money from symbols. Profiting from imaginaries was the new horizon of mercantile liberalism.

Today, when people in many countries celebrate Christmas, we cannot overlook the fact that December 25 is alleged to be the date of the birth of Jesus, a man who died crucified for advocating a different ideal for humanity and society, based on values such as mercy, austerity and love. However, the date has become an occasion to buy gifts, spend money on frivolities and reward consumerism. The symbolic-religious has become symbolic-mercantile.

It is not surprising then that the staunchest detractors of socialism practice the same, while promoting the capitalist system as the highest stage of social development. And finding that there is a solvent demand to finance their anti-communist crusade, they turned into profit what once, perhaps, was an honest, though misguided, commitment. It is hard to be honest when you pay obeisance to Don Money.

Battling for federal funds or for sums that are “laundered” through third parties, which may be foundations or other organizations, the champions of capitalist restoration in Cuba spare no effort to show themselves as “the best bet”. They have made the symbol of freedom their most profitable business.

According to the current, they mutate their discourse, to show themselves to be tougher or more peaceful. He who pays, rules: they only offer a service. With YouTube channels, where they talk about freedom, justice and the American way, while they sell you the best hamburger in Miami or the best beauty salon in Florida. Then there are sites that talk about national emancipation and transparency while they receive money from abroad through PayPal, with no declared patron. Then we have the counterrevolution has made preaching against the Cuban government a very attractive option from a financial point of view.

The same people who criticize so much the inequalities that we have not eradicated in our country, or who live by publishing any excess or luxury that a relative of a Cuban leader has, make thousands and even millions of dollars, with which they buy apartments, houses, travel around the world, are published in the most famous sites and media, receive prizes and gifts for the fact of continuing to breathe (before, during or after suffering the terrible Castro-communist dictatorship)…. Everything is possible if you belong to that financial and media corporation that has found an inexhaustible vein of gold in opposing the Revolution.

Meanwhile, there are useful fools who, poisoned by their hate speech, who continue contributing money, time and effort to a sterile cause. They are those who were deceived by a character who said he was going to come to Cuba from Spain, to free us from the “tyranny” of Diaz-Canel, with the infallible strategy of freezing the funds of the “dictatorship” abroad. Or those who believed that a certain playwright would fight to the last consequences because he believed in what he preached, and that he was not just another one of those who seek to facilitate a visa and a comfortable stay in Europe or the U.S. They are those who applaud, forgetful, any initiative, however puerile and inconsequential it may be.

The gesture is more important than anything else. That is why we are not alarmed when we read about the proposal to create a “Free Republic of Cuba”, nothing more and nothing less than at the naval base in Guantanamo, a territory illegally occupied by a foreign power. They have so commodified the symbol of freedom that they no longer even know what it means. But the worst thing is not that. The worst thing is that, consciously or unconsciously, this commodified counterrevolution has become one more “pillar” of socialism in Cuba. Because if the Revolution falls… what the hell are they going to live on?