“Excessive enthusiasm is a difficulty when facing frustrations.”

Hopefully, the empire will listen to its psychologists, and sometime understand that only new frustrations await it here, if it continues to trust advisors like Juan Gonzalez, Antony Blinken and the Miami haters. 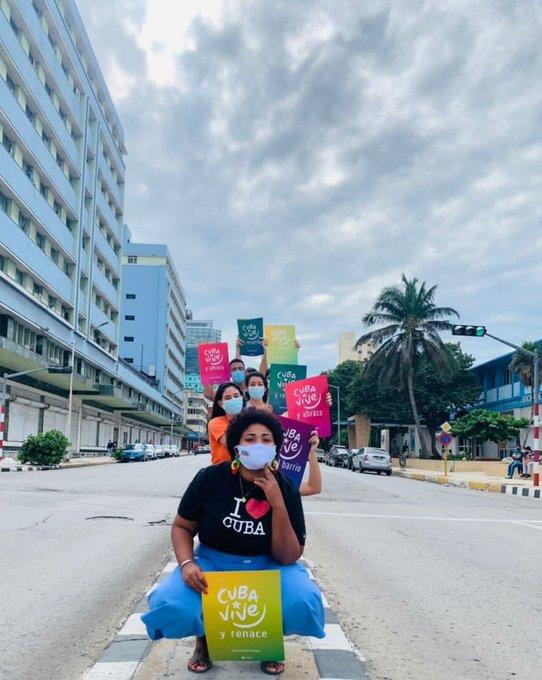 The United States has failed despite using all its unconventional warfare weapons against Cuba during the last two years. Photo: Taken from the Cuba Vive campaign.

Watching the events of the last few weeks in Cuba, it is easy to see the degree of frustration that must be gripping the U.S. power circles. They jumped, belly-first and with enthusiasm, into the waterless pool in which they found the intensive deployment against the island of all the weapons of unconventional warfare. During the last two years these included: economic, media and psychological warfare, terrorism, cyberwarfare, diplomatic pressure….

Those who for more than a decade have woven and financed in Cuba a dense network of media aimed at the most diverse sectors of society, collaborators in foreign correspondents, agents of change in the world, together with other forms of articulation, journalism and academia, leadership training courses, so-called thinking events in the United States, Latin America and Europe…, along with other forms of articulation, have had to see, I imagine not without sadness, how the current U.S. administration has thrown overboard all their patient work.

Juan Gonzalez, advisor for the Western Hemisphere of the National Security Council, and Antony Blinken, Secretary of State, violated, in their constant references to Cuba, what Niccolo Machiavelli suggested in the Prince: Never confuse desire with reality. The result is plain to see: the public exposure of U.S. interference in Cuba, the disarticulation of a good part of its internal subversion machinery and the discrediting before the Cuban people of those who have participated in it.

If one reviews the cable from the then-U.S. Interests Section in Havana, dated April 15, 2009, where its chief, Jonathan Farrar, described the failure of the traditional counterrevolution and suggests working with new actors such as bloggers, rappers and young visual artists, it is not difficult to understand how much the empire has lost in November 2021 in Cuba: at least 12 years of work!

But it is not triumphalism that should guide the work of Cuban revolutionaries after this 21st century Bay of Pigs. Washington lacks the humility to self-criticize its failures. Biden, even though he belongs to the same party, is not Kennedy, who had the courage to say to the mercenaries exchanged for compotes, when receiving them in a Miami stadium: “Victory has many fathers, defeat is an orphan”. Kennedy even attempted a secret rapprochement with Cuba that many believe is part of what cost him his life. And after the imperialist defeat at Playa Giron came the arch-terrorist Mongoose Plan, led at pencil point by the president’s brother, Robert Kennedy. Sobering, both Kennedy’s, John and Robert, were executed, not by the communism they fought so hard against, but by “lone assassins”, whose strings lead to the establishment they tried so hard to reform.

This time the decisive thing, again, has not been what our enemies have done, but what we have done. The key has been in the return to the people as the key factor, not only in processes such as the intervention of reality through the transformation of neighborhoods where numerous problems have accumulated. The key has been timely information about the war being waged against us, its characteristics and modes of operation. The latter -a missing element in our communicational work in previous years- assuming that a people capable of organizing itself in arms to defend its Revolution cannot be massively taught the weapons of the new war. We also underestimated the importance of broadly and deeply preparing all sectors of society for the not-so-new digital scenario, not only as critical receivers but, above all, as active participants.

It has been demonstrated, in recent months, that the media, state institutions, political and mass organizations, and the educational system weave a web that makes us invincible, if we are able to adapt it to the new circumstances and connect it with everyone who can be an ally in the anti-imperialist struggle, inside and outside our borders.

It’s a situation in which disinformation intoxication, through the growing use of digital social networks, serious economic shortages, shortages and consequent inflation, are joined by serious economic shortages, shortages and consequent inflation. It is necessary -in addition to the essential measures to stimulate the growth of the supply of goods and services, in addition to the successful control of the pandemic and the fact that blackouts are becoming less frequent, as is already happening, [to strengthen] ideological activity and, in particular, communications, as compañero Díaz-Canel has insisted, must be perceived by all revolutionaries as fundamental issues.

There are, to illustrate it, the material prosperity of Yugoslavia and Libya, razed to the ground with bombs after demonizing their governments, or more recently, the coups in countries like Bolivia and Nicaragua, with high economic performance indexes. Others believe that if we give institutional political space to the counterrevolution (multi-partyism it is called), the United States would begin to forgive us, but Antony Blinken’s response to the most recent multiparty elections in Venezuela should shake them out of their illusions: “it was not a free election”, he said, and, therefore, they will continue to support Juan Guaidó, who was indeed freely elected… by the Trump administration.

Not to rest in the battle for the truth, [we must] face decisively in confronting inequality where the disadvantages for the most humble have accumulated very significantly. [We must] create and enhance new economic, social, legal and cultural instruments against any inequality and discrimination, to intensely involve the people, and especially the youth, in the new and old fights. [That] has been the Fidelista response of the revolutionary leadership to the challenges of the present. And it has done so by listening to many, accepting criticism and speaking modestly, while working with intensity and transparency.

As the recently-deceased essayist, Juan Valdes Paz said in one of his last public appearances, the Cuban nation “does not have a solution vis-à-vis the US as we conceive it: independent, sovereign, self-determining”. But neither does Latin America and the world: independence, sovereignty and self-determination are obscene words in the empire’s dictionary.

The tribute paid by Washington and its allies to the last Human Rights Day was the announcement of the extradition of Julian Assange, to settle accounts with him for revealing, not State secrets, but war crimes and strategies of imperialist domination such as those exposed in the aforementioned cable, dated April 15, 2009.

It is the world upside down, where a Prometheus of our time must be tied to the rock so that the eagle devourer of entrails avenges, with exemplary punishment, the offense of exposing the Olympus of the dollar in its unspeakable crimes. Meanwhile, cardboard characters, in the tableau of dollars and technology paid by Wall Street, are applauded as heroes.

This is how the enthusiastic handlers of the N15 face their frustrations when there is no sovereignty to stop them. What would await the people of Cuba if they ever had the opportunity to impose on us what they understand by justice?

The social leaders shot and tortured en masse in our lands of America would be a colorful brushstroke for the hate-filled vengeance and bloodbath that the “military intervention” so often demanded from Miami in the last year would [actually] mean.

In the second season of the already old -and increasingly less outdated- Cuban series En silencio ha tenido que ser [It Had to Be in Silence], there is a scene in which the State Security agent, now a CIA prisoner, responds to a CIA psychologist, sent on a softening mission, with the advice she herself had given him during a training session when he and she were apparently on the same side: “Excessive enthusiasm is a difficulty when it comes to facing frustrations”.

Hopefully, the empire will listen to its psychologists, and at sometime [come to] understand that only new frustrations await it here, if it continues to rely on advisors like Juan Gonzalez, Antony Blinken and the Miami haters.

In the meantime, the signs are going in the opposite direction, so only the broadest culture and the most intense work can be our vaccines against an empire that, in its decadence, and worried about losing its hegemony at the global level, wants to gain a foothold in a territory it considers its backyard.