For Respect, Inclusion and Human Rights

For Respect, Inclusion and Human Rights 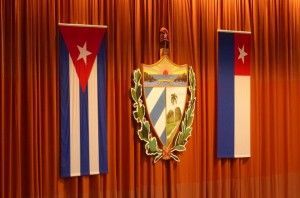 Undoubtedly one of the most-discussed articles during the recently concluded first ordinary session of the IX Legislature of the National Assembly of People’s Power was article 68, which establishes the concept of marriage between two people.

The change with respect to the current constitution is that the one approved in 1976 includes marriage as the union between a man and a woman, while the current proposal, with a revolutionary vision, does not define sex, sexual orientation, or gender identity.

In this regard, the press spoke with Deputy Dr. Mariela Castro Espín. She said during the discussion that this article mixes the rights proposed by the Constitution to guarantee the institution of marriage with the responsibilities of mothers and fathers.

“That is a technical question, I wanted to separate them because simply when it comes to operationalizing all this in the laws, it makes it easier to differentiate them, and also, it reproduces a reproductive or reproductivist vision of marriage.

She stated that there are unmarried people who, while others marry and are unable or unwilling to have them, hence marriage does not pursue only the reproductive end.

The director of CENESEX commented that marriage has several purposes, among them the desire, the pleasure of living together where shared responsibilities are assumed in the home. “That’s fine, but then marriage takes on another purpose, another project, which is that of the children.

“If we’re going to consider the reproductive responsibility of mother and father within marriage, then when we put all this into practice in the law, we have to guarantee the same options and possibilities to heterosexual couples, same-sex couples and people who decide to become single mothers or fathers,” she said.

Dr. Mariela Castro also mentioned that the current constitutional reform has a more inclusive vision. She described the achievement of human rights-based marriage as wonderful.

She commented that no person can be excluded or discriminated against for any reason. She also said that today Cuban society has more knowledge and can openly discuss these issues with the intention of protecting couples who wish to join together, without exclusion.

Despite its proposal, the National Assembly adopted that the article should remain unchanged, but that it would be enriched by the views of the people.

“That is a wonderful revolutionary achievement,” she said, and continued, “hopefully, when the document is submitted for analysis by the people, the majority will be able to understand the very important step we are taking in the field of human rights, in recognizing all the rights of people because of their sexual orientation and gender identity, because we have had difficulty reproducing the prejudices we have learned.

She reflected that there are people in the population with their dogmas, prejudices and beliefs who consider that homosexual people are not fit, capable of being mothers and fathers.

“And I repeat what I said in committee: motherhood and fatherhood is not a gift from nature, it is not an instinct as they believe: it is a learning experience”, based on observation of other mothers and fathers.

The only difference between heterosexual and homosexual mothers and fathers is simply their sexual orientation, she said.

“There are even those who believe that homosexuality is a disease, it sticks, it will be learned. No. If it were that simple, there would be no homosexuals, because they would be heterosexuals just like their parents were.

“It is an era in which this obscurantist, manipulative and retrograde thinking is being overcome with science, with scientific knowledge, inspired by the humanist spirit and based on the interest of the Cuban State in advancing the human rights agenda,” she concluded.

This is an intentional and tempered draft project in the sense of the historical moment with the aim of guaranteeing more rights, more inclusion, independence, sovereignty and equality.

3 years ago CubaDebate, TranslationsLGBT22
In the Background of the WifiMarriage Between Two Persons