Granma publishes the remarks of Prime Minister, Manuel Marrero Cruz, at the 32nd anniversary of the Urban, Suburban and Family Farming Program in the municipality of Segundo Frente, Santiago de Cuba 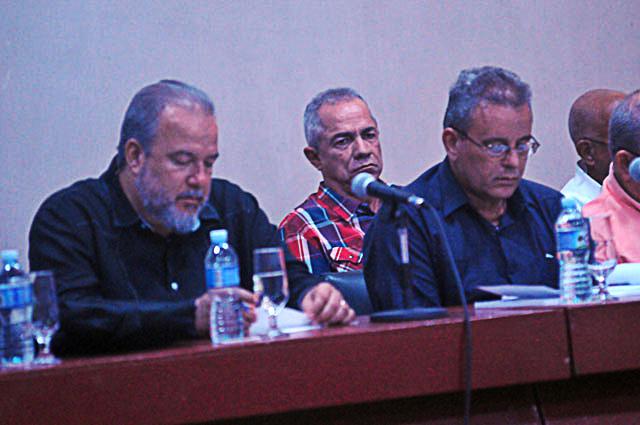 Compañeras and compañeros of the presidency and invited guests;

Delegates to this important work meeting:

More than three decades ago, on December 27, 1987, during a visit to an experience of growing vegetables in quarries enriched with organic matter in Hortifar, an entity belonging to the Military Agricultural Union, the Army General [Raul Castro] indicated to analyze and develop this method of cultivation. This is how the Urban Agriculture Program was born.

Years later, this type of quarry became part of the environment in every corner of Cuba, from the big cities to the small towns.

Then the idea emerged, also from the Army General, to increase the scale of those crops to the lands around the cities, which in their great majority remained unproductive.

As you will remember, this came to be on April 8, 2009, first in Camagüey, within a radius of ten kilometers from the center of the provincial capital. It was called suburban agriculture, and wisely integrated into the by-then already consolidated urban and family agriculture. It was under the direction of comrade Adolfo Rodríguez, known affectionately by all of us as Adolfito. With such passion, responsibility and efficiency he took on the task, practically until the last moment of his life, and to whose commitment we owe a great deal of what was achieved. May this event serve to honor his memory.

The concept has remained unchanged: to generalize a system of food production based on local potential, that is, creating there their own technologies and productive inputs by using the potential available in the territory.

Undoubtedly, since then, progress has been significant. The program has been consolidated as a popular movement of a productive extensionist nature and under agro-ecological principles. This is done with the use of sustainable production technologies, the use of local resources, and the combination of experience and traditions with science and technology.

It is a dynamic, deep, vertical, coordinated and directed work system through the National Group. This has allowed us to achieve positive results and with it, important savings to the country’s economy, contributing to the decrease of input imports.

Today, our country imports $1.65 billion in food for the people, so replacing those imports is strategic. We must commit ourselves to the development of this program and extend its various productive structures to our cities, up to 10 square meters per inhabitant by next year. To take advantage of all available spaces in the cities or towns.

There are plenty of reasons to defend this strategy. In the first place, it is the most economical way of producing food. It can work with a minimum of motor transport and fuel – even without any if necessary – as people can buy them where they are grown, or the transport is a short distance and allows the use of alternative means.

Another very important point: it does not require imports of pesticides or fertilizers. Each hectare of quarry committed must be supported by the amount of fertilizer and other organic inputs needed.

In addition, it guarantees employment for thousands of workers, including women and young people. It is an elementary tool for achieving food security. It contributes to improving water management and nutrient recycling. It allows the use of unproductive, idle or underutilized spaces and is capable of producing the seeds it demands, among other advantages.

All this makes it a realistic and sustainable alternative, a reference for what we have to do to achieve food and nutritional sovereignty for our population.

It is fair and necessary to recognize what has been achieved, but you know, and you analyzed it during the event, that even greater results can be achieved with the resources available today, if we use them with the maximum of rationality and intelligence.

No one can feel satisfied until the last disused quarry and organoponico is recovered. The goal is to repair them all and put them into use during the current year. Likewise, to complete the reconstruction of the protected and semi-protected cultivation areas affected by meteorological phenomena or by the logical deterioration of the years of exploitation.

The yield per square meter must be increased. There are plenty of examples of what is possible when quality seeds are used and with a constant application of organic substrates and fertilizers, as well as the appropriate use of bio-products and agro-technology.

The use of animal traction in cultivation work around towns and villages should be a constant, whether or not fuel is available. In addition to the efficient use of water and renewable energy sources, such as biogas, windmills, solar panels, biomass and other alternatives, depending on the possibilities in each location.

We cannot stop at the incorporation of idle areas, covered with marabou and other weeds, in the surroundings of population settlements and communities.

It is also important to guarantee production throughout the year; not to neglect the summer under the excuse of unfavorable weather. In those months we have to promote products that are more resistant to heat, such as cucumbers, eggplants, beans, and okra, among others.

We must perfect the marketing of fresh vegetables and fruit, with emphasis on the population, but without forgetting tourism, social consumption, defense, and the internal order, and we must even get to export some products.

Closely linked to these purposes is the objective of continuing to adjust the organizational system of Urban Agriculture. It is necessary to analyze its financial structure and measure its impact, to ensure adequate profitability and stability in the results.

The Municipal Urban Farm and its representatives of the people’s councils must exercise a broad power of convocation among local producers. In turn, they must play the productive, political and social role for which they were created. It is necessary to work hard to re-establish the marketing network that will simplify and facilitate the acquisition of agro-products directly for the local population.

The success of this great effort has a decisive key: the women and men who make the land produce. It is essential to continue to increase the incorporation of the labor force into this activity, especially young people, and to perfect the systems of payment by results.

Also from Urban Agriculture, the fruit tree program was born, which was incorporated into the local supply in all the perimeter of our localities.

Regarding this program, Army General Raul Castro Ruz suggested to create a fruit tree cooperative in each municipality and today we can report with satisfaction that we have 353 cooperatives throughout the country, dedicated to the production of fruit for the people.

With regard to food production in general, today more than ever we have to promote polyculture.: It is not the same to invest in fuel, fertilizers and other resources to prepare the land and sow a single crop than to take advantage of the same for two and three more.

We had proposed to guarantee 30 pounds per month of food and vegetables to each fellow citizen,. Of those, we reached 20 in 2019. We will reach that goal in less time if we continue to increase the productive areas, from the backyards, the orchard, the giant organoponicos and suburban agriculture, to the large productive poles.

To do this, we must continue to produce high-quality seeds. Research centers already show positive results with seeds that are better adapted to our climate, increase yields and even reduce production cycles.

Another objective is to guarantee each Cuban five kilograms of animal protein per month, and last year we only reached 200 grams. It is unsustainable to try to increase the production of animal protein-based on imported feed and raw materials, in which we are investing 450 million dollars today. It is as much of a priority to produce animal feed as we consume directly as people.

We Cubans have inherited as a food tradition a diet made up of four basic products: rice, beans, food and protein, to which we should add vegetables or salads. Of these, we now have total sovereignty over only one: food. We import an important part of rice, and to a lesser extent, beans and meat, but also in considerable volume, and even a level of vegetables.

Our future has to be directed towards achieving food sovereignty. We have to aim for this in stages, the shorter the better, planned and well-coordinated in a comprehensive way through realistic plans. It is precisely vegetables and beans that we can stop importing in the short term.

We are convinced that this program will continue to grow and will play an important and irreplaceable role in achieving these strategic objectives.

We congratulate you on the results achieved in 2019 and we urge you to continue to move forward as a national reference in the production of food for the people and thereby demonstrate that Yes we could, Yes we can and Always we will.