By Ricardo Alarcón de Quesada
December 7, 2019
Doctor in Philosophy and Letters, Cuban writer and politician. He was Ambassador to the UN and Chancellor of Cuba. For 20 years he presided over the National Assembly of the People’s Power of Cuba (Parliament). 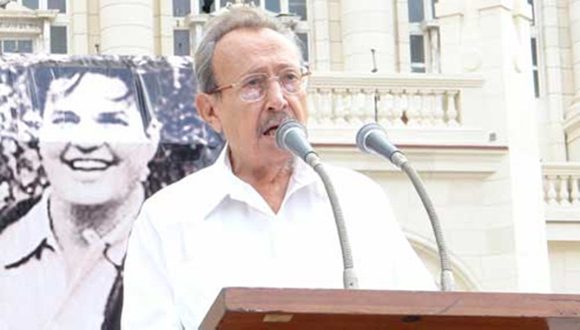 Faure stood out for his absolute loyalty to Fidel and Raúl, and his permanent defense of unity among revolutionaries. Photo: ACN.

Although it could happen at any time, the news of his departure causes pain and sadness. I feel the need to let those feelings flow now without dwelling on how much should be written about Faure Chomón and  his decisive participation in the revolutionary cause of our people.

I met him shortly after beginning my studies at the University of Havana. He introduced us to Fructuoso Rodríguez, the inseparable companion of José Antonio Echeverría. Both engaged in an incessant struggle to transform academic life by stripping it of mediocrity and routine. At the same time, they fought to eliminate the consequences of the vices of the old politicking that hampered the revolutionary role that FEU had to play in the face of Batista’s dictatorship.

Faure led a small group that fought for these ideals, disseminating short mimeographed texts that they distributed from hand to hand.

They were uncertain times. We had to face the apoliticism and the demagogy, the frustration and the disbelief that the Republican bankruptcy had bequeathed us as a cursed inheritance. A new generation had to become its own teacher and undertake hard learning in very difficult and risky circumstances.

José Antonio and Fructuoso managed to rescue the FEU, created and directed the Revolutionary Directorate and, with their blood, they fertilized the route of freedom. Faure always accompanied them.

We fought together for half a century. In the final stage, he was advisor to the President of the National Assembly. He occupied a very modest space in the building that then housed the Parliament. We talked about the human and the divine on a daily basis. I always sought his advice, but more than as an advisor. He was always a loyal and sincere friend, a compañero of the old times. The hours went by reminding us of a glorious past that always went with us.