Home Dominica: The Next Victim? 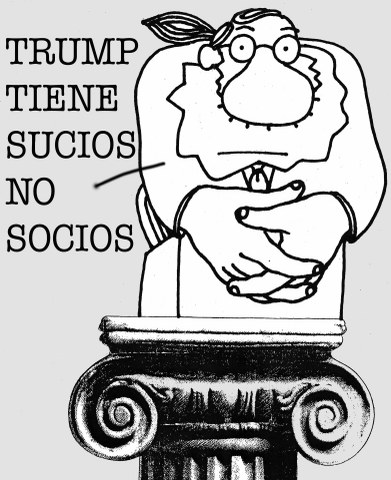 Luis Almagro’s hands are stained with the blood of the original peoples – the Aymaras, Quechuas, Guaraníes- murdered by the fascists after the coup d’état plotted in Bolivia with the active complicity of the OAS. But he is also guilty for the deaths, tortures and disappearances of Chilean, Colombian and Ecuadorian students and workers. They are victims of a brutal and ceaseless repression that does not about which the inter-American body has not made a single complaint.

He ignored what was happening and which shook those countries while he made other plans. He also wants to spill Caribbean blood. He dreams of repeating in the small island of Dominica his fascistic “feat” in Bolivia.

Several weeks ago, some groups of the island’s opposition took to the streets in an uproar demanding modification of the electoral rules that govern there and to do so before the elections that are due to take place on December 6. Carrying out the election would be practically impossible if such a process were undertaken at this point.

Immediately, in public statements, they received Almagro’s support. He also offered the OAS to advise and supervise the process that, according to him, was indispensable for democracy.

His shameless interference in matters that do not concern him was vigorously condemned before the Permanent Council of the Organization by the head of Dominican diplomacy and also from the island’s Prime Minister, Roosevelt Skerrit who denounced: “The OAS and Luis Almagro advise the opposition to destabilize the country” and rejected the OAS demand.

Caribbean solidarity was not long in coming. The territorial government promoted a compromise between the contending parties to prevent violence and ensure orderly and fair elections.

On November 27, at the invitation of the Dominica government, an official Commonwealth delegation arrived in the capital to observe the entire process from now until the final count after the vote concludes. The observer group is chaired by Ms. Zainab Bangura, former Foreign Minister of Sierra Leone and a former UN Under-Secretary. She is accompanied by a group of eminent personalities including Assad Shoman, one of the founders and former Foreign Minister of Belize and other jurists and electoral experts from Uganda, Barbados, the United Kingdom, Kenya, Jamaica, Antigua and Barbuda and Malaysia. The names and backgrounds of all of them have since been published in the Caribbean media.

Such a group of notables could not be brought together by the discredited OAS. (By the way, does anyone know those who made up the mission that Almagro sent to Bolivia? Why haven’t they yet published the report that the coup plotters evidently used?)

Awaiting the events in Dominica, let us remember Ralph Gonzalves’ warning. The Prime Minister of Saint Vincent and the Grenadines said: “The OAS and Luis Almagroo are enemies of the continent’s democratic forces.”