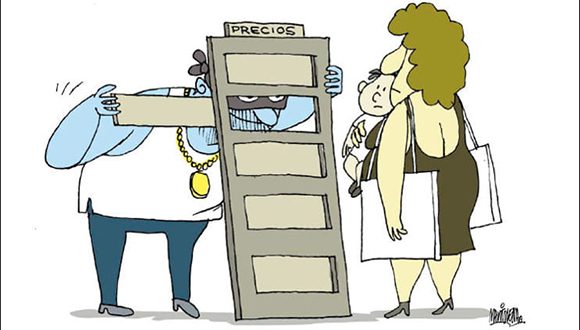 Imagine you arrive at a state-owned repair facility. You are instructed to go to the receptionist’s desk, who, in addition to taking your personal details, prepares a voucher that states in the accounting documents the type of care you will receive and the consequent cost. They then direct you to some of the repairmen present. The repairman will look hard at your appliance, the one that broke, of course, and then there will be a curious dialogue in which the repairman will tell you that for the type of damage to your appliance there are no parts in the unit… But – and this is always an interesting saving act – the repairman managed to get it, and he is ready to solve your peremptory problem.

Of course, doing so implies a “cost”, certainly much more expensive than if the “substitute” part were there in the workshop… From then on you will not end your “productive chain” within the establishment, by returning to pay for the service with the original partner who attended you, but in an intimate, very private agreement with the repairer, which will splash out to other internal confines…

Stories such as the one above gradually give shape in Cuba to a type of property that was not included in any economic or social guidelines, and therefore not in the Constitution. We are now celebrating the first year since its approval by a majority in a popular referendum. [But for this situation] there are no programmatic documents that aim at reconfiguring our socialist model.

The rationality and practical sense of the ordinary citizen has already made his baptismal act, with name included, to this curious variant of owner: “state” property [la propiedad “estaticular.] A direct and accurate friend defines it as a hybrid establishment, which in the papers are in the name of the State but, in the concrete one, a good part of the pieces and the dividends go, surreptitiously, to the pockets of its workers.

It is a secret and strange form of expropriation of public possession to which many are accustomed, by force of necessity, because otherwise, it would be very difficult for them to resolve the issues that entangle their existence.

In the recent balance sheet of the Ministry of Internal Commerce, some of the shards of this deformation jumped out. A large part of the products destined, for example, to gastronomic establishments end up being transferred to the private or cooperative sector, without fulfilling the purposes for which they were financed by the State. And the most painful thing is that this happens while the financial debts in these areas are extremely high, as much as the payments for losses to the nation’s pocket and pitiful corrupt chains.

These phenomena are more visible now, as our State tries to find its true limits. The body of that unavoidable institution for justice, freedom and sovereignty in Cuba, disproportionate for years, is giving way in size and functions.

One of the most important definitions of the so-called Updating is precisely the acceptance that the State is one thing as owner in the name of the nation and the people. Another is the various models in which property can be managed, something under discussion since the decision of the so-called “revolutionary offensive”, which turned state property into almost the entire national economic fabric, one of the “errors of idealism”, recognized by Fidel.

This definition allows for progress in the expansion of self-employment or small personal or family property-even the expected acceptance of the concept of private property, up to the scale of small and medium enterprises, the experimental opening of cooperatives in the non-agricultural sector, the handing over of idle land in usufruct, the leasing of state service premises, and the incipient purpose of transforming the socialist state enterprise, seen as the heart of the economy and of modernization.

Examples such as the one mentioned above require a more flexible and limited vision to the current circumstances, which favors the emergence of more socialized forms of property management. All of these should contribute to overcome the dragging of socialist experiences regarding the alienation of the workers from the productive processes.

Going to the causes of this fragility implies reviewing the role of the workers in the political conception of our State, for which it is necessary to cover more significant aspects, such as the issue of property and its forms of organization.

Let us not forget that the issue of property is so basic that the theorists of American neo-conservatism maintain that it is the true and crucial scenario of the decisive cultural war on a planetary scale. Not for nothing did its think tanks and its tight advertising machinery try to manufacture the ghost of a “socialist” Obama, and the same recipe now with the emerging Bernie Sanders.

Not just any trifling thing then, but our staple “hybrid-owner”.